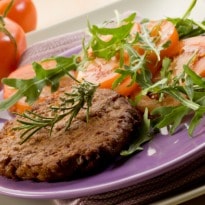 Vegetarian steaks now feature on the menus of select gourmet restaurants in the city. Sonal Ved taps the trend.

...Imagine an angel suddenly sweeping down out of a better land and setting before him a mighty porterhouse steak an inch and a half thick, hot and sputtering from the griddle; dusted with a fragrant pepper; enriched with little melting bits of butter of the most unimpeachable freshness and genuineness..."

These delicious words from the Mark Twain's novel from the '80s may be in praise of a succulent piece of beef, but vegetarians in Mumbai need no longer be short of feeling this passion. For the city is now brimming with meatless steak options.


Not to be mistaken with mock meat, vegetarian steak is a dish that is made using vegetables or ingredients--cut or cooked in a way that they resemble non-vegetarian steaks. "Unlike faux meat, these are not made from soya chunks nor do they have a meat-like flavour and mouth-feel," says Chef Tarang Joshi from Colaba-based restaurant Indigo.According to Joshi, who dabbles with seared tofu steak, the thought behind creating a vegetarian equivalent is to replicate a particular experience. He says, "The idea is to allow vegetarians diners to cut, slice and relish a meat-free steak the way non-vegetarians enjoy a chunk of beef."

While this kind of steak is ideally made from animal protein, eateries in the city are moving past vegetarian protein forms such as cottage cheese to create meat-free steaks. Take for instance Lagerbay's grilled polenta steak. "Polenta is essentially coarse corn meal. The ingredient is a popular rustic food and is well-known for its instant energy-giving effects," says Chef Yasin Inamdar from the restaurant.

This dish is not only popular among vegetarians; it is a must-order for health enthusiasts who relish it for its nutritional benefits. Owing to this popularity, the restaurant soon plans to launch another veg steak called the Taco Steak. "It will be my take on the classic Mexican snack and will be served with a helping of vegetables and a tangy tomato sauce," says Inamdar.

It is interesting to note that most vegetarian steaks were put on the menu to give herbivorous diners a chance to dig into something healthier than plated carbs. "If you flip through any restaurant menu, the vegetarian main course section will have dishes such as pasta, pizza and other carb-loaded dishes," says Chef Rahul Naik from Amadeus. He believes that vegetarian steaks break away from this cliché and give one a chance to try something nutritious and different.

At Naik's Nariman Point eatery, a dish called Corn and Macadamia Nut Steak is a hit among Jain patrons. The dish, made using a combination of corns, fresh water chestnuts, macadamia paste and Gruyere cheese, is revered for the no-garlic and no-onion option. The restaurant ends up selling at least half a dozen of these every week.


Touch of the exotic

Worli-based Two One Two Bar and Grill also uses exotic veggies. At their Sunday brunch, one can dig into grilled Portobello steak. "Portobello which is a type of wild mushroom is ideal to make vegetarian steaks," says Chef Samirpal Singh Virdi from the restaurant. Since the ingredient has a succulent interior and a meat-like chewy texture, it works well as a meat replacement and brings the dish closer to what a diner would experience while chomping beef.

Comments"However, unlike red meat steaks, vegetarian ones are light and therefore work well when served with sides or as a part of a larger menu to deliver a satiating experience," informs Virdi. He personally serves his creation on a mound of creamy risotto rice along with grilled yellow and red bell pepper and doesn't mind throwing in a bowl of mashed potato for company.

The Newest Entrant In Gurgaon - Madam Gusto - Takes You On A Culinary Expedition With Its Global Delights
Gujarati Food 101: Bite Into All Things Gujarat At 'Ba Ni Rasoi' In Garvi Gujarat Bhawan