Biryani Lovers, You Have To Try This Unique Char Minar Biryani For A Rich, Heart-Warming Treat

This Char Minar Biryani uses mutton as its star ingredient and presents a succulent dish, beautifully layered with a string of vegetables, spices and herbs. 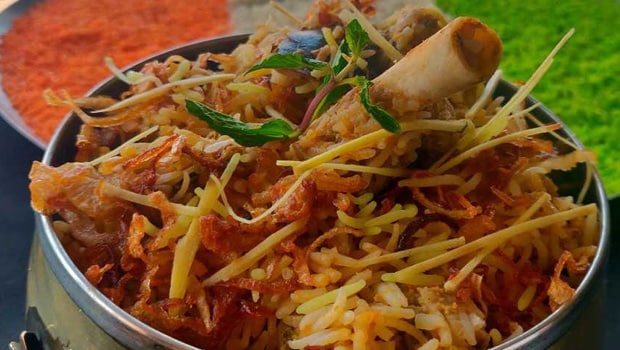 This authentic Char Minar recipe is a dense and rich dish that you'll love.

We don't know anyone who doesn't love biryani. A plateful of the aromatic and flavourful rice dish is enough to get us drooling. A true blue biryani lover understands the value of authentic biryani, which is hard to find just anywhere. Different regions of India prepare their own versions of biryani, but its essence remains the same everywhere. What makes biryani such a special dish is its unassuming look, which actually is quite deceiving until you take a bite of it. A simple-looking plate of coloured rich is a melting pot of a myriad of flavours from spices, vegetables and meats.

Traditional, long-cooked biryani brings out the true complexity of foods it is made with. It may seem like an easy task to make it - cook rice with some ingredients and food colours (or not) and you are done. But, the truth is that you actually need to be a savant at making biryani, knowing all the essential cooking techniques. The task gets easy-going only after you've learnt how to make it in its elementary form, even if theoretically.

(Also Read: 13 Best Biryani Recipes You Must Try At Home)

If you are a biryani fan, you may have tried different kinds of biryani - veg biryani, chicken biryani, mutton biryani, Hyderabadi biryani and so on. If you thought that's all there is and you've explored the world of biryani already, then you may be wrong. Here's another kind of biryani that you may not have come across till now but once you will, you'll be hooked to it.

This Char Minar Biryani uses mutton as its star ingredient and presents a succulent dish, beautifully layered with a string of vegetables, spices and herbs. The mutton biryani is cooked in saffron infused milk with succulent marinated mutton, and a whole lot of other foods that all come together to build a mirage of flavours. It is made in a series of steps -First, rice is cooked with various spices. Mutton is marinated with a range of spices again. Meat mixture is cooked with onions, tomatoes, cloves, cinnamon, cardamoms and milk for some creaminess. Then the layering of biryani starts - Add a layer of ghee rice, followed by onion, coriander, ghee, and saffron milk; place cooked meat over it; cook it, and finally garnish it with the specially prepared garnish before serving it.

View the full recipe of Char Minar Biryani here and make this mouth-watering delicacy at home for your friends and family.

PVR HOME Is All About Luxury, Fine Dine and World Class Wines
For Weight Loss-Friendly Breakfast, This Suji Vegetable Dhokla Is Just The Healthy Dish You Want