Can Ice-Cream and Chocolate Really Boost Your Mood? 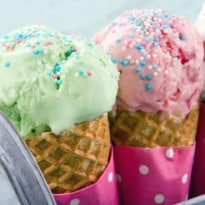 While your favorite chocolate or a tub of Ice cream may be associated with childhood memories of happiness and carefree living, deeper physical responses may be at work, triggering various moods while you indulge over these sweet treats. Chocolate and Ice cream lead to a set of physical and emotional responses in most people. Knowing what response these sweets trigger in your body can help you satisfy your cravings, avoid overindulgence and deal with mood swings.

Contrary to what we may think, eating yourself happy with ice-cream or chocolate may not actually boost your mood. In fact, we may simply feel better after some time regardless of what food we eat, researchers say.

"Whether it is your comfort food, or it is a granola bar, or if you eat nothing at all, you will eventually feel better. Basically, comfort food cannot speed up that healing process," explained Heather Scherschel Wagner, a doctorate candidate from University of Minnesota.

While the study was being conducted,the participants were asked to pick foods that they thought would make them feel better if they were in a bad mood. They were also asked to pick foods that they liked but thought could not uplift their mood. These participants were later showed a 20-minute video that intended to extract the feelings of sadness, anger and fear. As anticipated, participants were in a bad mood immediately after watching the video. But again three minutes later, their mood improved, regardless of whether they had their comfort food, another food, or no food at all.We are always sure that Ice creams and chocolates are just the thing to boost your energy and calm your nerves when you're overwhelmed and exhausted. But according to Robert Thayer, PhD, professor of psychology at California State University in Long Beach and author of Calm Energy: How People Regulate Mood with Food and Exercise, that really isn't the case. Thayer's research has shown that the mood boosting ability of sweet snacks like a candy bar is short lived."In fact, in one study, we found that people were more tense and tired an hour after they had eaten a candy bar than before it," says Thayer.

Thayer put forward a much better way to deal with negative emotions: Take a brisk 10-minute walk. Sounds perfect and yes it's that easy! Thayer says people tend to crave sugary, fatty foods when they are anxious but also low on energy, something he refers to as "tense tiredness." This hits most people about 4:30 in the afternoon and again in the evening. Though a sweet snack may temporarily revive you, Thayer's research has shown that a brief bout of moderate exercise is a much more effective and longer-lasting solution.

People like to find explanations for things, Wagner noted, adding that if people find that they do actually feel better without eating comfort foods, that might stop the unhealthy pattern of eating.

Thayer explains,  "If you think about a personal problem late at night when your energy is low and your tension is high, it seems horrendous. But the same problem considered the next morning may seem like nothing at all."