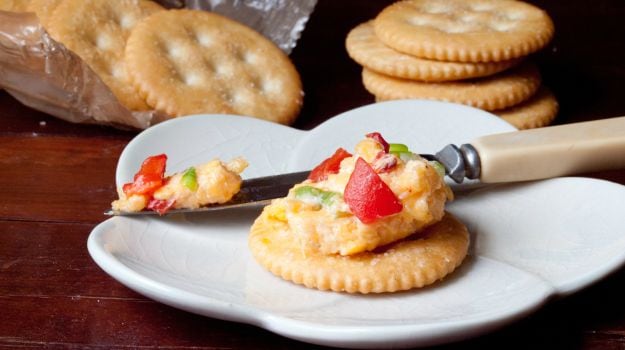 Pimento cheese is the ultimate Southern junk food. But unlike most junk food, which is highly processed and untouched by human hands, pimento cheese at its best is a homemade affair.

On a recent road trip through the Shenandoah Valley and West Virginia, I found myself on a quest for good, old-fashioned pimento cheese. It's a Southern delicacy with deep roots -- a magical mixture of cheese, fat and spice that my grandmother would make as her private stash of comfort food, but one that she would share with me when I was a child. When I saw it on the menu of a roadside diner in rural Virginia, I was delighted and told my husband he was in for a treat. But this version of pimento cheese was cold, hard and -- worst of all -- bland. For the rest of the trip I insisted on trying pimento cheese at every diner and restaurant where I could find it. We ate several truly terrible versions and each time I would say, "I swear this isn't how it's supposed to taste!"

At our last stop, we found ourselves at a tiny restaurant called The Shack in Staunton, Va. And here, at last, was pimento cheese that tasted the way it should: sweet, salty, creamy, with a bit of a kick.

It was clear that somebody at The Shack also knew the power of good pimento cheese. The Shack's tiny size is balanced by its enormous reputation. Southern Living Magazine ranked it as one of the South's top 10 best new restaurants in 2014. I talked to Ian Boden, chef/owner of The Shack and asked him, given the short menu and the large reputation, why this lowly homespun cheese spread was special enough to make it into regular rotation. Boden's answer was simple: "A big part of what I try to do is connect with people. And I think pimento cheese, especially in the South, connects with everybody."

The power of pimento cheese, whether made by a renowned Southern chef or my own Granny Willie, was connection. Now I had to connect.

I had tasted the real deal. Now I wanted to make my own. My grandmother never wrote down her recipe, so I had to start from scratch. Thus began my quest to create the perfect pimento cheese. What started in a series of roadside restaurants ended in my own garden. In spring I hunted down pimento pepper plants (not a small feat, as it turned out) and planted them in the small raised bed in my backyard. I figured you can't make decent pimento cheese without fresh pimento peppers.

But then I realized that fresh pimentos were actually a break from tradition. My grandmother used pre-chopped pimento peppers preserved in vinegar. Most women of her generation did the same thing. Even chef Boden admits the cultural importance of this lowly jarred product. The recipe served at The Shack also comes from a grandma -- the grandmother of cook Brian Cromer. Boden admits that if Cromer had his way, they would always make pimento cheese with chopped jarred pimento peppers, just as his grandma did.

But these days, Boden and his staff use fresh pimento peppers in season and tinned piquillo peppers the rest of the time. I figured my backyard pimentos would work.

The problem now was that I only had a limited supply of homegrown peppers. If I wanted to experiment, I'd have to look beyond the walls of my raised garden bed. As it turns out, the biggest barrier to making good pimento cheese was the limited availability (and seasonality) of fresh pimento peppers.

I started looking around for substitute peppers. And if I was going to experiment, then I might as well try different fresh peppers, as well as jarred pickled peppers. One of the most interesting peppers I tried were Nardello peppers, which were recommended to me by a helpful vendor at my farmers market. Slightly sweet, but with a satisfying crunch, Nardello peppers have a little more depth of flavor than a traditional pimento. I brought home a bunch to begin my experiment.

Roast your own peppers

Once I had gathered my peppers -- homegrown pimentos, sweet Italian, and Nardello -- the next step was to roast them. Roasting the peppers is the most time-consuming part of the process. I like to roast peppers in a toaster oven, but it can be done in a full-sized oven or even over a gas burner. I broiled 5 or 6 at a time for 15 minutes on each side, until they began to shrivel and the skins began to turn black in spots. (This would take less time in a traditional oven.)

While letting my roasted peppers cool, I began working on the cheese base. I used my grandmother's version --never written down, but clear in my taste memory -- as inspiration. It begins with a great mayonnaise blended with shredded sharp cheddar and cream cheese. But I was concerned about exactly what kind of cheese I needed to get the traditional flavor. When I asked Boden, his answer surprised me: "Pimento cheese is junk food, so why not use junk food ingredients?" Boden mixes Cabot sharp cheddar cheese (a pretty good industrially produced cheese) and a style he calls "government cheese" to get the right flavor profile.

"If you use a really good quality cheddar, it's way too sharp and the texture gets chalky, and it's just not right," he said. "If you go to the grocery store and see the cellophane packages that say "best value" -- that's the cheese we're talking about." Boden is also a big fan of Duke's Mayo for his base -- Duke's being a tangy (and less-sweet) favorite Southern brand for nearly a hundred years.

Bring balance to the base

After I created the base, I scraped the skin off my cooled roasted peppers, de-seeded and diced them and tossed them into the mix. For experimental purposes I made small batches, each with a different kind of pepper.

One of the reasons I liked The Shack's pimento cheese is that it conformed to my own ideas about how good pimento cheese should taste. Boden has similar thoughts on flavor balance in pimento cheese. "I think a lot of pimento cheeses tend to be out of whack as far as flavor goes," Boden said. "I think ours has a good balance of sweet, and I know acidity in cheese is supposed to be a negative thing, but I think it has just enough acidity. I like a little heat in mine, so that brings it back into balance." The Shack brings even more acidity to its spread by adding the brine from house-made spicy bread and butter pickles. It's delicious, but too far from my grandmother's ideal for my purposes. To add my own kick, I gave each batch a healthy dose of Sriracha sauce.

The result: perfection. At least for me. With Boden's help, I had created a taste of my childhood and of rural Shenandoah Valley. My version is an ode to my grandmother, but it isn't a recipe she'd recognize. I suspect she'd say it was too spicy, too oniony, and not nearly sweet enough. Time marches on and so do taste trends.

I gorged myself on the homegrown pimento pepper version and -- to my surprise -- my California-bred husband and my two daughters dug into the Nardello version, spreading it on crackers, French bread, celery and then fingers. It was Southern junk food at its best. And I think Granny Willie would be proud.

1. Roast peppers under a hot broiler, turning at least once so they blister on both sides. I like to do this in a toaster oven, but it will take longer than in a traditional oven --up to 15 minutes on each side. When done, place peppers in a bowl and cover with plastic wrap to cool. If using jarred peppers instead of fresh, drain and dice 1/3 cup of peppers and set aside.

2. Mix cream cheese and mayonnaise in a medium bowl until smooth.

Promoted
Listen to the latest songs, only on JioSaavn.com
4. Scrape the blackened skin off roasted peppers, remove seeds and stem, then dice.

Comments6. Serve at room temperature, accompanied by celery stalks or crackers, preferably Ritz. Pimento cheese may be refrigerated for several days but should be brought back to room temperature before serving.