Future Food: 5 Weird Food Items We Could Be Eating in the Future 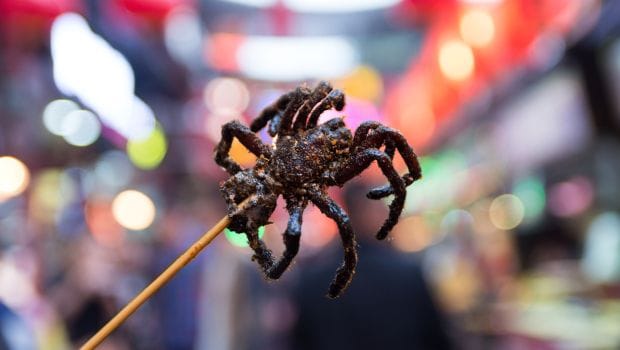 Highlights
You must have wondered how some of your favourite dishes came into place. Maybe in some of your curious musings, you have googled and read about the origins of dishes, as to how did the pizza that you are having today came into being. Who designed the idea of these cheesy delicacies, who kneaded the first stock of dough, the trials and errors through the centuries to finally give you the slice that you are having today. But have you ever wondered as to what our food choices would be in the future? We bring you some weird future predictions and trends that are sure to take you by surprise. Get ready for some food for thought.

It would be incorrect to term bugs and insects as potential 'future food', as human beings have been consuming bugs since time immemorial. With the population on the rise, experts are predicting insects like crickets, grasshoppers and mealworms to be a regular affair on our dinner tables. And it makes complete sense too! These critters are abundant, high on protein and other nutrients, cheaper and much easier to farm than raising cattle or chickens. It is well known how in Asia, Africa and South America bugs are a prominent part of the culinary culture, but these critters are fast becoming popular in other parts of the world. The most recent development being the spike in sale of cricket flour from protein bars of Europe. Bug-eaters around the world are known as Entomophagists. Before you start shrinking your face in disgust, eating bugs is actually not all that bad. Entomophagists also claim that these insects actually taste pretty good. In a BBC video that went viral recently, actress Angelina Jolie was seen munching on crickets, scorpions and a bunch of these critters. Jolie was not only seen gorging on these creepy crawly critters, but was also seen feeding a host of them to her children, who happen to be big fans of the bugs too. This is because, when insects are cooked, they tend to absorb all spices, and can be made into crunchy chips. 100 gram serving of crickets and grasshoppers approximately amount to 13 and 21 grams of protein respectively, while meal worms can act as an amazing source of dietary fat.

Food and Agricultural Organisation (FAO) recently released a report titled, Edible Insects: Future Prospects for Food and Feed Security, which said that about 2 billion people around the world are already consuming bugs and that these critters can be seen as a promising alternative of protein and a means to fight hunger in the future. Of the edible portion of these critters, beetles were found to top the charts for Entomophagists. The UN report further noted that an insect-farming industry could also prove to be a lucrative business opportunity for those in developing countries.

As creepy as it may sound, but there are near chances of you feeding on algae and algal products for your daily source of nutrition. Algae, like every other plant feed off carbon dioxide in the atmosphere, which can make it a great source of proteins and can be envisioned as a replacement for eggs, and also butter and other fats. What makes algae as a potent alternative is its lower contents of fat and cholesterol and their vegan nature. Some species of algae were also found to contain omega 3 fatty acids, which promote good heart health.

Spirulina, the blue green algae has already gained recognition as a superfood. Rich in protein, calcium, vitamin B12, iron, magnesium, beta-carotene, healthy fat gamma-linolenic acid and all eight essential amino acids, it is sold in the market as pills, powders and is also incorporated into various smoothies. Spirulina grows naturally in warm ponds and fresh water lakes. Even NASA sees spirulina as a potential food for space travel. NASA discovered that 1 kg of spirulina had the same nutrients found in about 1,000 kg of assorted vegetables, making the blue green algae the better and easier alternative to carry to space.

(Also read: Spirulina: An Algae Which is a Superfood (No, Really!)​

With the population outburst and scarcity of food, raising cattle and chickens is soon becoming a challenging task for its heavy dependence on large lands and livestock feed. In such a scenario, it isn’t surprising to vision meat business thriving on lab processed meat. According to a study, synthetically cultured meat would result 7–45 percent lower energy and 78–96 percent lower greenhouse gas emissions thereby making it a more sustainable alternative to the conventionally produced meat.

Lab grown meat is produced by patterning stem cells into animal tissue, and using that tissue as synthetic meat. Scientists predict that in about 20 years, we would see the trend replacing  the mainstream way of production of meat in the market. And why just meat? NASA researchers made full fish fillets by dipping goldfish muscle into fetal bovine serum!

Overfishing of the oceans is one of the major concerns bothering the environmentalists for quite some time now. The novel advancements in aquaculture and the idea of farming fishes can be seen as a potential and a sustainable solution to the problem. The commercial business of raising fish for human consumption in tanks, ponds and irrigation ditches can actually prove to be beneficial for the environment, and can increase the  total stock of fish for consumption. The trend is already starting to pick up as most of our aquatic food now comes from farming rather than fishing. In 2011, the world farmed more fish than beef for the first time.

(Also read:10 Food Habits You Can Change to Save the Earth)

Listen to the latest songs, only on JioSaavn.com
3D printed food is a way of preparing food in an automated way. Not only does it save cooking time, it can act as a healthy and good alternative to the conventionally made food, which might prove hazardous to environment in the long run. It can help convert alternative ingredients like proteins from beet leaves, algae or insects into edible and delicious treats. It also leaves you room to customise your meal as per your choice. Even NASA was reportedly investigating benefits of 3D printing food in zero-gravity so that astronauts can cook their meals in space.

In the discussion of future foods, we cannot leave out the debates on ‘the end of food’. Scientists have been long predicting food being replaced with a more efficient way to receive all the essential nutrients required by our body.

CommentsAlternatives are already becoming popular in the form of meal replacing drinks containing complete blend of protein, carbohydrates, lipids and micronutrients - basically a blended mix of everything your body needs. These drinks made of substances like algal oil and soy protiens are primarily a substitute to a skipped meal or nutritious needs, but such alternatives can be seen as a step forward to the disappearance of conventional food from our tables.

With these predictions, it seems as though food as we know today will be undergoing vast changes in the future. You might end up finding yourself baffled with new concepts and ideas. But as long as it is edible and yummy, should we be complaining?