Hrithik Roshan keeps his fans posted with his adorable food moments (mostly with family) on Instagram. We grabbed hold of the top ones! 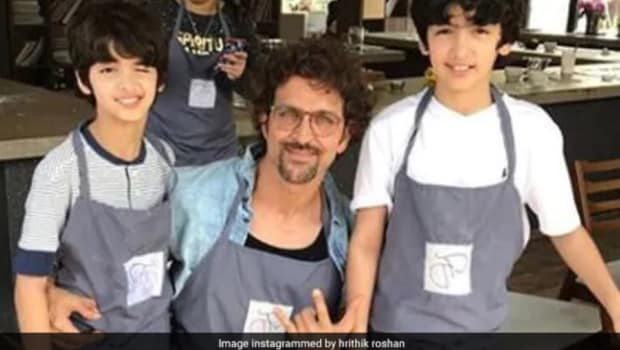 Bollywood superstar Hrithik Roshan is ringing in his 45th Birthday today. Hrithik who was last seen in blockbuster 'Kaabil' impressed both the critics and audience with his convincing portrayal of a visually impaired man on a mission to avenge his wife's dishonour. Hrithik who would next be seen in a biopic based on mathematician Anand Kumar in Vikas Bahl's 'Super 30' has started prepping for the film already. Hrithik established himself in the running of top league of stars with his debut film 'Kaho Na Pyaar Hai' itself. He also bagged all the major best actor awards for his powerful act in the film- which till now remains a feat unprecedented. Veterans and stalwarts of the industry have often cited Hrithik Roshan's debut as one of the most sensational debut of all times.

In addition to his fine acting chops, Hrithik is also known to inspire a generation towards fitness. His sculpted physique, chiselled features and stunning dance moves may lead anyone to believe Hrithik lives in and out of diet food and protein shakes. Yes, a strict diet and rigid routine are an integral part of his life. But that doesn't mean that Hrithik doesn't have his share of indulgences. In fact, if his friends are to be believed then the actor is quite a foodie and shares a soft corner for all things sweet. He binges at least once in a week. Hrithik has a weakness for brownies, peanut butter, nachos, and can eat two pizzas at a time all by himself as claimed by him in one of his interviews. It's mama Pinky Roshan who wins the 'best cook in the world' award for this gorgeous hunk. Hrithik Roshan loves Indian cuisine too. Be it piping hot and simple dal-chawal or rich and robust chicken and mutton, Hrithik loves them all. Apart from that, Hrithik is also a fan of Mexican and Chinese cuisine.

Hrithik Roshan has a weakness for brownies, peanut butter, nachos, and can eat two pizzas at a time all by himself.

So there you go! At last, there is something that makes this Greek God someone like you and me. Hrithik keeps his fans posted with his adorable food moments(mostly with family) on Instagram. We grabbed hold of the top ones.

So apart from taking the box office by storm with his power-packed performances and killer dance moves, the doting dad loves to cook for his little sons.

"Garlic chicken pesto, molten chocolate and calzones. Hopefully three things they'll never pester me to get again since now they know how to make it.
#cookingclassescalmcantankerouskids
#sundaywellspent" he captioned the image as the boys posed after the intense Italian cooking sessions.

So he has to maintain those abs, but he also loves his sugary indulgences? What to do? A delicious 'Fitness Cake' to the rescue.
"Ever heard of a fitness cake? Here, feast your eyes out. Thank you @fitnessbakery #healthy #noguilt#sweettoothindulgence #delicious", he captions the image, inviting his followers to drool.

That's the doting dad who can do anything for his adorable sons except for compromising on his ice cream. Nope, not even the 'puppy eyes' work on him.

"Don't try those puppy eyes on me son, I TAUGHT you that trick. You chose it, you have it. #nocompromisesonicecream #noexchange", he captions the cute image.

That's him enjoying another precious mealtime with kids!