Shake it up: confessions of a cocktail convert 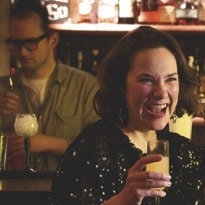 Sophie Heawood never cared for cocktails: too silly, too girly, too pricey. Now she's discovered there's much more to mixology

Sex And The City almost managed to put me off cocktails for ever. Watching that programme a few times in early adulthood, I thought it was rubbish. Hated the shoes, the shopping, the shocking revelations about female friendship and shagging that didn't seem that shocking at all. Is this all we get, I used to think, some carefully made-up girly girls sipping overpriced cosmopolitans in a swanky New York bar? It was their cocktails that bothered me the most.

And so it was that I ignored anyone saying the words, "Let's go for cocktails!" I drank pints, I drank wine, I was a gulper and I wanted a big glass that wasn't drained two seconds after I raised it to my greedy lips. I didn't want triangles of girly pink stuff that looked about as effective at quenching my thirst as a packet of cheese and onion. Also, they cost far too much.

Well, the years pass, you get older, and life's neat trajectory inevitably turns you into a perfect combination of the person you always wanted to be and the person you always loathed. And so it is that, like a total wanker, I have fallen in love with cocktails. It turns out they aren't all pink and perky. Some of them taste of the deep and the dark and the night. Some of them are musky, some of them seem to fill your synapses with an urgent, fizzing message. Some of them hit you like a bullet, then linger on your tongue, promising things. And, yes, some of them are fruity lil numbers in a triangular glass with an umbrella in it. It turns out I even like those, too. (It also transpires that the price gap between cocktails and other sorts of drink has narrowed, so you might as well bankrupt yourself in style.)

The best thing about cocktails is how cheering they are in winter, taking you out of the gloom. You might as well find out how to make them at home, because that is where much of your end-of-year drinking is almost certain to take place. I'm not saying that getting wazzed off your chops was exactly what the archbishop of Canterbury meant by finding alternatives to rampant consumerism at this spiritual time, but it's certainly one way to keep yourself out of the shops.

Instead of mulled wine or eggnog, how about mastering a classic martini? This is my end-of-year challenge to myself. A martini hasn't got silly pink umbrellas or goo in it, or a name such as Sex On The Beach that you don't actually want to say out loud in front of visiting relatives. You can pretend you're James Bond, or even something more poetic. Indeed, the martini was described by the essayist HL Mencken as "the only American invention as perfect as the sonnet". Perhaps the all-time literary classic about cocktail culture is The Hour, written by Bernard DeVoto in 1948. He wrote that there are only two cocktails: a slug of whiskey and a martini (he went on to add that hot drinks were "for people who have had skiing accidents".)

Such a purist was DeVoto that he had no time for olives in martinis, and I agree with him there. You don't want food taking up vital alcohol space in your glass. Really, though, my favourite martini quote comes from Dorothy Parker: "I like to have a martini, two at the very most. After three I'm under the table, after four I'm under my host."

With all this in mind, I set out, like some kind of alcoholic Blue Peter presenter, to find out how various London bartenders mix this most perfect of drinks. Do they prefer gin or vodka in it? Should it be shaken, not stirred? How does that vermouth thing smeared across the ice cubes like a whisper work? And was Noël Coward right when he explained that mysterious mixing method as like "filling a glass with gin then waving it in the general direction of Italy"?

First I went to Ruby's, an underground hideaway bar in Dalston, east London. It was recently described as the "best cocktail bar in London" by Grazia and "our fave east London hideaway" by Vogue. Ruby's is part of a new wave of slightly scuzzy basement bars where hipsters like elegantly to slum it. Tom Gibson, the proprietor, grew up locally and calls himself a cockney, but is well aware that gentrification has brought in his customers. He says the trend for cocktails instead of pints is also about health, though. "If you're going to have 20 units of alcohol in a night, which people do, six cocktails is a refined way of doing it. It's quality over quantity." (We cannot guarantee that your doctor will phrase it in exactly the same way.)

His barman agrees that their perfect martini is vodka-based, but they don't use vermouth. Instead, they rinse the ice cubes in something called Pimento Dram, an aromatic liqueur from Jamaica, produced by macerating cinnamon, nutmeg and cardamom into rum. You take 15ml of that, a couple of dashes of orange bitters, and stir into the ice cubes until they've absorbed some of the flavour. Then pour that mixture away - yes, this is the bit I can't quite get my head around. (If you're making this in your kitchen on Christmas Eve, while everyone's watching reruns of Elf, surely you can just knock it back when no one's looking?) Then pour 60ml of vodka over the newly perfumed ice cubes and you're done.

"You want subtle, you don't want overbearing on a martini," Gibson stresses. For a fun, Christmassy touch, he garnishes it with a twist of orange peel with cloves stuck along it. (He admits that these might be somewhat more satisfying for readers to make at home than for his bartenders to fiddle with on a busy Saturday night.) "You can't go too far from the set rules, or it ceases to be a martini. What you need are a couple of subtle twists."

This sentiment is echoed in the next bar I attend, the much more overtly lavish Zetter Townhouse in Clerkenwell, also in east London, but more central and with a fancy hotel upstairs. The barman, Yan Callan, explains that their building is both Victorian and Georgian, and they like to mirror this history in their drinks. To which end they use a 1680 martini recipe from Cologne, which was recovered in the 1860s, in a book called The Bar-tenders Guide, by Jerry Thomas. (Yes, such books were indeed being written 150 years ago.) They then recreated it from that recreation, which sounds complicated but, no, the Köln Martini is all about keeping it pure: 15ml dry vermouth, 50ml gin and two drops of homemade citrus aromatics. (In this case, Zetter's own mixture of sandalwood, neroli and other such botanicals.)

"We use gin in our martinis," Callan says, "and we try not to throw anything off the base spirit too much. Some citrus and savouryelements, combined, work well, but add those flavours only after you have mixed the alcohol. Don't mix them in with it." He adds that they are very precise about measurements. Word to the wise if you fancy trying this at home (or if you still have giddy memories of Tom Cruise chucking things about behind the bar in Cocktail): "free-pouring" seems to be a no-no in all these bars. Which is just as well, because... good grief, this Köln Martini is strong. It sort of hits you in the nostrils, in the brain. I feel filled with the rush of it.

Next, it's on to Rules, a London restaurant steeped in tradition. Though famous for generations as a place to eat, and something of a Covent Garden landmark, Rules is not quite so known for its cocktail bar, which opened upstairs only in 2009. You sneak up a discreet staircase and find yourself in some kind of Tory safe seat wonderland: it's like a secret drinking den for old duffers who lunch. The red carpet has got swirly leaves on it, the walls are wood-panelled, there are gold-framed paintings of dogs and tasselled standing lamps. There's a chap at the bar spouting cheery rightwing rhetoric in such familiar tones that I suddenly struggle to remember if Denis Thatcher is dead.

All of which means that they have a drink called the Kate Middleton. Of course they do. I order one immediately. The Kate Middleton turns out to be made of the petals of roses and violets, crystallised, then shaken together in alcohol, exactly like its namesake. Well, that's what my notes say, but it was 11pm when I wrote them, and the man at the bar who wasn't Denis Thatcher could be heard muttering that "it was only supposed to be a quick drink here. Everything just sort of escalated."

Just as well, then, that the bar manager, Chris Lacey, turns out to be such a good sport, although something of a purist, too. "To call a drink a martini," he says, "it should just be gin and vermouth. Unfortunately, through the 1990s, the word got very abused, and everything served in a cocktail glass got called one." He is not hugely approving of my deeming the Kate Middleton "a martini-style drink".

Still, we do agree that it's delicious. Make one at home with Fortnum & Mason crystallised rose and violet petals, 25ml gin, 25ml Pinky vodka and 15ml Lillet Blanc, plus 10ml lemon juice and 10ml sugar syrup - make no mistake, this drink is sweet.

After all this great advice, I'm not sure I'm any the wiser about what the perfect martini contains. Some prefer gin, some favour vodka, and some omit the vermouth. There's possibly more consensus in this country about how to make the perfect cup of tea.

Still, I have the rest of my life to find my perfect martini, because it turns out cocktails aren't just for Christmas - or girly girls - after all.

Photo: 'I didn't want triangles of girly pink stuff that looked about as effective at quenching my thirst as a packet of cheese and onion.' Photograph: David Yeo for the Guardian