Using Dehydrated Fruits: Add a Burst of Flavour to Your Regular Cooking 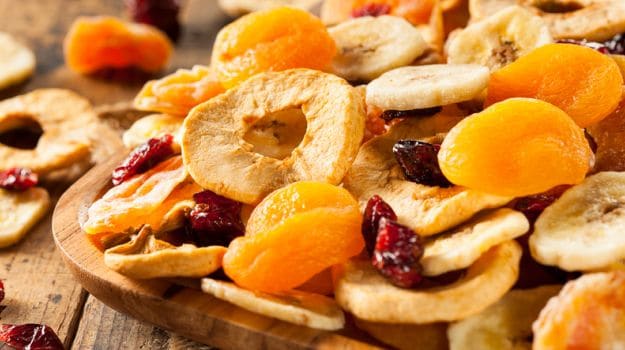 It is one of the most stunning desserts you can eat in India at the moment. A delicate, ruby red rose is on the platter, stylishly placed next to frothy foam that may just remind you of Lucknow's light nimish served up on leaves on winter mornings. The server asks you to knock the rose against the plate-with some force should you be wary of damaging a thing of such beauty. Much against your will, if you do land up playing disruptor, the petals will shatter and you will proceed to scoop up their sweetness with the light almond-milk flavours of the foam. It's a dish that may remind you of a Persian or Nawabi banquet. But you are eating it at the country's most decidedly cutting-edge "modern" restaurants; a fitting finale to this season's tasting menu at Tian, that twists and refashions Asian gastronomy in strange yet familiar ways.

The rose dessert is indeed inspired by certain Awadhi sensibilities. What its composition also reveals to us is the ironical fact that modern food fads are often built on indisputably old and traditional ways of cooking. Dehydrated fruit - and indeed flowers, veggies and meats - may be a "new" trend in the world of gastronomy, being used in the temples of modernist cooking. But in fact the idea is as old as it gets.

"Dried fruits" have been mentioned in our histories-and culinary histories-as long ago as in 1700 BC when Mesopotamian tablets mention dried figs, apricots and apples. As a food preservation technique, drying fruits has had a long and continuous history across culinary cultures-raisins is only its most evident and popular manifestation. So today, when enterprising and fad-led home cooks and high profile restaurant chefs turn to their dehydrators, it is hardly a new thing.

(Looking for dry fruits to stock up your pantry? Shop now!)

Dehydrated Fruits in the Modern Kitchen

Chef Vikramjit Roy, the architect of the stunning rose dessert at Tian, whose individualistic expression of culinary sensibilities is unparalleled, agrees that dehydrated foods is hardly a new idea, pointing also to the sun-dried meats in north-east India and across many other cultures, widely used as energy-boosting snacks. Modern kitchens with their finer equipment only make these processes more precise and controlled. And sometimes, dehydration can be the result of not just heat, but extreme cold too.

Kitchens that use techniques of molecular gastronomy often use lyophilised fruit in their creations - where water in the fruit has been frozen at extremely low temperatures and then the surrounding pressure too lowered, allowing the water to sublimate directly from the solid state to the vapour state. This process of freeze drying was in fact invented in the early 20th century and put to medical use as a way of sending blood serum from America to Europe to treat soldiers injured in WW II. Essentially, this was a better and more long lasting way of refrigeration.

That today's restaurant-going consumers should be partaking of these inventions in the pursuit of pleasure is both ironical and inevitable. The rose dessert, for instance, uses a lyophilised rose (that has been first dipped in lavender honey for extra sweetness), which explains the brittleness of the petals. But because this is a creation meant to not just delight but also shock and surprise, there are bits of other fruit too that you encounter. Frozen, dehydrated tart blueberries with intense flavour, chewy bits of mango-also flash frozen, whose dried out texture is a sharp contrast to the foam. The modern day kitchens are labs experimenting on all our senses.

(Looking for healthy snacks to munch on? Shop now!)

Dehydrating fruits and vegetables, however, is entirely possible within the confines of your homes. Before multinationals took over and made potato chips mindless munchies out of a bag, substantial time and thought was spent on how to perfect these at home. Every spring, particularly around the festival of Holi, matriarchs would slice the tuber fine and spread them out on sheets on the terrace. The sun would do the rest, giving us those home-made chips that are now the stuff of only nostalgia.

At Tian, one of my favourite dishes that the chef invented after I told him of a simple gratinated fish-with-potatoes dish that I had encountered in Tuscany, is a sea bass with potato chips on top. Instead of simply gratinating, or grilling the chips, dehydrated ones are used. With the precision available to high-end cookery, only 40-50 per cent moisture is removed from these chips to give them a perfect texture-not too chewy. The gratination is done just to finish the dish.

While restaurants have their dehydrators, you could use any oven to make your own dehydrated chips-from any fruit or vegetable that you like. Slice apples, sprinkle them with lime juice to prevent them turning black as a result of oxidation and then leave them on low heat for hours. Or take the peels of potatoes and other fruit and leave these in the oven at about 20 degrees and let them dry out. Powder them and use as seasoning for a burst of flavour. Even your grandmother may have approved!