We Will Remove 'No MSG' from the Maggi Noodles Label: Nestle's Global CEO 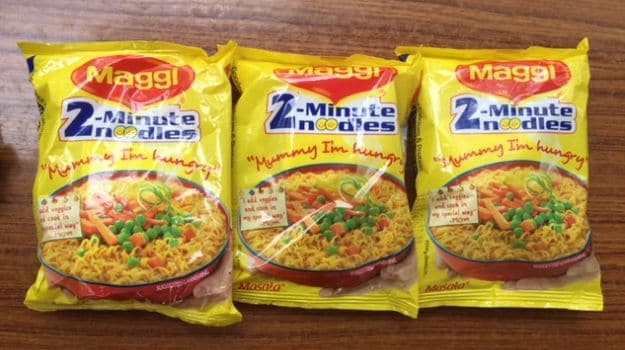 At a press conference held in the capital, Nestle CEO Paul Bulcke addressed the media and declared that Maggi noodles are ‘safe for consumption and we have the same quality standards everywhere in the world.’

Test every batch of Maggi as it leaves factories, assures Nestle's Global CEO

Regarding the lead content, they have conducted several tests showing that the lead quantity in the noodles is below the levels prescribed by FSSAI. Nestle India has procured test reports of its samples from Edward Food Research and Analysis Centre Limited, Kolkata. The test results mention that the samples of Maggi noodles complied with the norms of the Food Safety and Standards Authority of India (FSSAI).

(Maggi Noodles Found with Excess Lead: Doctors Respond)The test reports revealed that the lead content is less than 0.05 milligrams (mg) per kilogram (kg) while the maximum permissible level is 2.5 mg per kg. The laboratory had taken samples of Maggi noodles on May 24 for a detailed analysis on the measures of chemical substances present. They tested 500 samples that represent nearly 125,000,000 packs of the popular snack.

Apart from these samples, Nestle India also stated that about 1,000 batches of Maggi noodles were tested in their own laboratories.  The company said that they are working with the authorities and the food industry to clear the confusion regarding their product and clarify how the tests have been conducted and why these differences have cropped up. Mr. Bulcke also called for greater clarity from India's own regulators, asking to see the results of laboratory tests that have prompted many states to ban Maggi noodles.

Maggi goes off the shelves

Meanwhile, Nestle India has decided to take it off the shelves, but with a promise to bring it back soon. Here’s the official statement: “MAGGI Noodles are completely safe and have been trusted in India for over 30 years. The trust of our consumers and the safety of our products is our first priority. Unfortunately, recent developments and unfounded concerns about the product have led to an environment of confusion for the consumer, to such an extent that we have decided to withdraw the product off the shelves, despite the product being safe." The CEO clarified that they are not going to pull Maggi noodles from shelves in the UK or any other country.

On 3rd June, the Delhi Government imposed a ban on Maggi noodles for 15 days and asked Nestle India to recall all current stocks from the capital and make available new stock, which will be allowed on shelves only after proper checks. Following the scare, other states like Uttarakhand, Gujarat, Jammu & Kashmir, Tamil Nadu, Madhya Pradesh, Mizoram, Maharashtra, Bihar and Assam have also banned the sale of the product till the situation clears and many retailers across the country have withdrawn the product from their shelves.

The Gujarat government has banned the product for a month, but the most stringent action till now has been taken by the state of Tamil Nadu which has imposed a three-month ban on Maggi noodles. 65 samples were taken from across the state and in six out of seven test results received, it was found that lead content was higher than the stipulated limit of 10 lakh per 2.5 Parts Per Million (PPM). Other brands that sell instant noodles are also in hot water as the Commissioner of Food Safety in Tamil Nadu has banned the manufacture, storage and sale of Wai Wai Xpress Noodles, Reliance Select Instant Noodles and Smith and Jones Chicken Masala Noodles. The Kerala government has decided to send all instant noodles' samples in the state for a laboratory test.

The Food Safety and Standards Authority of India (FSSAI) has ordered state governments to check all noodle products made in the country. Several companies like ITC, Hindustan Unilever Reliance Industries along with other small firms sell instant noodles in India.

The Maggi noodles controversy has gone global as Nepal and Singapore have banned the import of the product. According to the the Agri-Food and Veterinary Authority of Singapore, importers have been ordered to suspend the sales of Maggi brand instant noodles produced in India.

The Maggi noodle controversy continues to be on a boil as the Food Safety and Standards Authority of India (FSSAI) has asked Nestle India to stop further production, processing, import, distribution and sale of the said product with immediate effect. In a notice issued it stated that it has decided to,"withdraw and recall all the nine approved variants of Maggi Instant Noodles from the market and stop further production."

CommentsAccording to FSSAI three major violations have been noted - excessive levels of lead found in the product that makes it ''unsafe and hazardous'' for human consumption, one of their products (Maggi Oats Masala Noodles with Tastemaker) was being sold in the market without risk assessment and product approval and thirdly, they have violated labelling regulations for the use of taste enhancer 'MSG'.