Why is the Betel Leaf (Paan Patta) So Significant in Hindu Traditions? 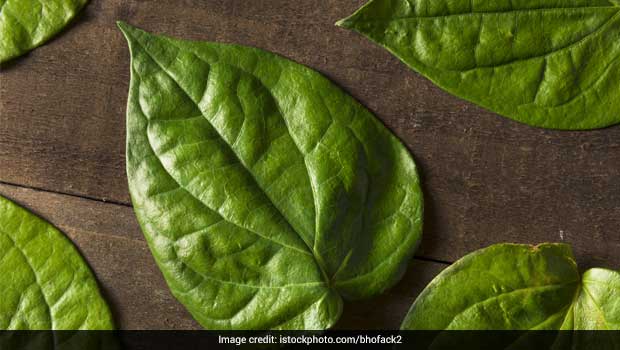 Highlights
A symbol of prosperity, a magical ingredient of Ayurveda and an important part of religious customs and traditions, the refreshing and evergreen creeper, commonly known as Paan Patta, holds a special place in Hindu tradition. Native to South-East Asia, betel leaves are as important as the sacred Tulsi plant which is worshiped in many households. But we never think of the reasons behind the connection of betel leaf with many traditions despite the fact that it is used in almost every religious custom.

In South India in a region known as ‘old Mysore’, it is a tradition to offer two betel leaves to the guests on every auspicious occasion. Also, a betel nut and a coin are placed on a betel leaf to be offered as dakshina for priests and elders in South India. Likewise, Assamese offer a betel leaf to guests after having a meal. It is a custom to chew paan ke patte especially after meals as it acts as a digestive. Betel leaves are also used to embellish the Kalash (pot) used for performing various religious rituals as it purifies the water.

Betel leaf is used to worship gods. Photo Credit: iStock
Mythological BondAccording to Ramayana, the time when Shri Hanuman reached Lanka to convey the message of Lord Ram to Sita Devi, she gave him a garland made with betel leaves when she couldn’t find anything else to offer him as a token of delight and appreciation. This is why people offer betel leaves while worshiping Shri Hanuman.

In Mahabharata also, the betel leaf played a significant role. It is believed that Arjun was asked to acquire a betel leaf after his victory the over evil powers in Rajaugya Yagnya by the priests that was needed to start the Yagnya. Since there were none available in that area, Arjun had to go to the Kingdom of Snakes – Nag Lok and ask the queen to give him a betel leaf. This is why the betel leaf is also known as Nag-Velli or Nagarbel.

Symbol of marriage and love

According to the traditions in many South-East Asian countries, a combination of Betel leaf and Areca nuts is inseparable as they symbolize loyalty in love and a strong bond. Thus, it became a tradition to chew a betel leaf and Areca nut when the bride and groom’s parents talk about their wedding plans for the first time to impart good luck.

There is also a very famous saying in Malayan, "bagaikan pinang dibelah dua" which means that the newly wedded couple is now compatible to each other just like the betel leaf when divided in half. It is also considered to be a symbol of fertility and is used in many traditions of Indian weddings.

They are a part of many Indian wedding rituals. Photo Credit: Istock
Ayurveda and science

According to Ayurveda, betel leaves contain certain elements which can help to cure diseases caused by air and bile. According to the Vaidyas in Sanskrit, betel leaf juice was often prescribed as a remedy for infected ears and pus formation and can cure a headache by applying it on the forehead.

Promoted
Listen to the latest songs, only on JioSaavn.com
A betel leaf contains vitamin C, iron, carotene, fibre, potassium, iodine and thiamine and hence is used widely in Aryuvedic medicines to prevent bad teeth, treat ulcers and acne, help in relieving coughing and even to cure respiratory disorders like bronchitis.