A Delicious History of Chicken 65 & the Ultimate Recipe 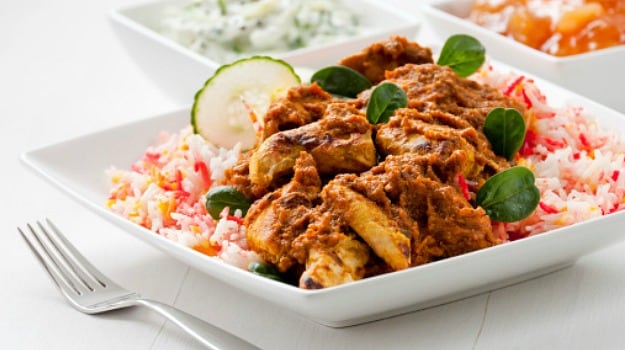 This is the sort of dish that can set your mouth on fire, make your heart beat faster and kick the usual bread-coated fried chicken to the curb. It's deep-fried (of course), with this crazy saltiness and crunchiness to it, and punchy flavours of curry leaves, ginger, garlic, chillies and all the ingredients that make a happy Indian dish. Chicken 65 is a classic, and a classic deserves special mention.

Sometimes, such a dish is more about the place than the food itself. So if someone gave me Chicken 65 in an upscale restaurant, I don't think I'll enjoy it as much as I would at the want-to-pull-my-hair-out-crowded Andhra Bhawan. The other great thing about classics is that it encourages argument. People of different age groups and generations have their own versions. It's hard to define, yes, but when you eat the real thing, you just know it. So let's get to the heart of an all-time favourite, the Chicken 65. Amitabh Bachchan had asked the same question in the popular TV show Kaun Banega Crorepati, Season 1 that I'm about to ask you now - "where does the dish Chicken 65 come from?"

(7 Parottas That Are a Must-Try When In South India)

The first and most popular theory suggests that Chicken 65 was invented in Tamil Nadu by a gentleman called A.M. Buhari in the year 1965. It was introduced at the Buhari Hotel; a fine dining restaurant in Chennai which used to offer Chicken 78 and Chicken 82, and still sells the Chicken 90. Another theory, though not as popular is that Chicken 65 was made with 65 awfully spicy chillies. It is believed that eating chilli was a testament to how manly you were. So if you could get yourself through a plate of Chicken 65 then it would be a reflection on your true manhood. One account suggests that Chicken 65 was named so because the marinade took 65 days to prepare. But it's unlikely that this is true because common sense alone defies this logic.

(South India's Spice Hero: How to Make the Famous Gunpowder)

Then you've got some more absurd theories like the fact that the chicken was cut into 65 pieces or that the chicken was 65 days old when it was used in the preparation of the dish. One account suggests that soldiers in the Chennai canteen were presented a long menu which had this dish against the serial number 65 and so the dish got the name Chicken 65. It is believed that since there was a language barrier in the Cantt, the easiest way for soldiers to remember the dish was to refer to a number.

According to Chef Sebastian Abraham of Zambar, "Chicken 65 is a classic but each South Indian state has its own version. Personally, I love Chicken 65 with the bone but restaurant rules dictate that we serve boneless because it's much easier to eat. At Zambar, we make the traditional Kerala-style Chicken 65 and use only hand-made masalas. We serve it with a fiery red chutney made South-Indian style."

"The Karnataka version of Chicken 65 is garnished with freshly grated coconut. Andhra Pradesh has its own style which is dry, extremely spicy and the chicken is cooked instead of being fried. The Tamil Nadu version is similar to that of Keralas' and is known as Kori Sukka."

1. Take the boneless chicken and marinate it with ginger garlic paste, yoghurt, salt and lemon juice. Mix and keep aside for 30 minutes.

6. Now serve with a spicy mint sauce and a slice of lemon.