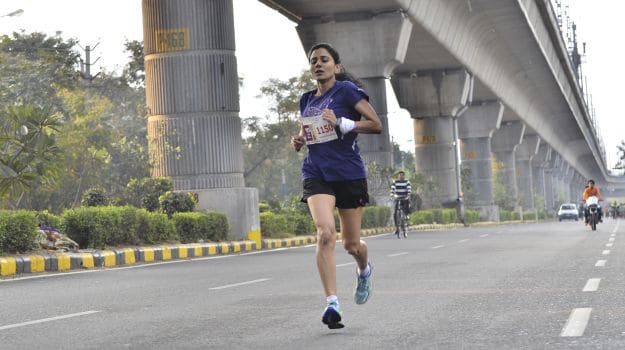 A woman is the embodiment of courage, devotion, compassion, ambition and above all, nurturing. She is a creator, a giver and in today's era she is much more than what she was ever expected to be. A woman goes through a lot to create another life, she pushes all the boundaries. Therefore, in my opinion, no tribute can be grand enough to celebrate the grandeur of womanhood. Unfortunately, a modern day woman is so thwarted between her duties and responsibilities that she often forgets herself. On an average, today's women are sleeping less, working more; eating wrong, working long and certainly, taking their fitness for granted.

The Women 10K run that took place on 6th March 2016, Sunday, near the HUDA City Centre Metro Station, was one such initiative to sensitize the society about women's health. If a woman can multi-task throughout her life, she can certainly take a step forward and make some room for personal fitness as well. And that was exactly what we got to see that day.

We spotted women, geared up for their run as early as 6 in the morning. Nothing seemed to deter those 1000+ women from reaching the venue from far off areas and participate in the run, neither the overnight rain nor their age. From college students to the elderly, it was heartwarming to see a multitude of women, walking and running for one cause - healthier Indian women. Our hearts were delighted to see tiny tots, husbands, even in-laws cheering for their women to take a leap and run for fitness. We stumbled across a duo that undertook and successfully finished their 3k run at the age of 66!

"My inspiration is my daughter. She has been running for quite some time now. She successfully finished her half marathon last year at the Airtel Marathon Event. I also completed my 4K senior-citizen marathon during that time," Chanda Bakshi Chandra, 66, shared with us.

"Her daughter is married to my son. He also runs. It is a good way to stay fit. You don't have to run. I jogged and walked and managed to finish it without even feeling lethargic or tired. I was visiting them from Hyderabad and thought of giving it a try. I enjoyed it to the fullest, if given a chance, I will do it sometime again. I would just suggest girls and women to start exercising, running, walking, there is no age for it," Chandrika Dytha, 64, added.

The Woman 10K run was divided into three running categories - 3K, 5K and 10K respectively. According to the organizers, close to over 1200 women participated and almost half of them undertook the 10k run. There were women who have been training and running for years, as well as those who experienced it for the first time. The atmosphere and the vibe was electrifying, there was a zumba warm-up session before the run conducted by the VivaFit group. Energy drinks, refreshments and foot massages were also on offer for all and sundry.

The event was initiated and organized by Coach Ravinder Singh and Tanuja Sodhi who have worked in fitness since close to a decade now.

"One of the biggest reasons why we wanted to do this kind of an event was to bring together people who are genuinely concerned about their health and are passionate about running as a mode of fitness. We wanted an event free of any registration fee or any other hassles and provide quality experience to the runners," co-organizer, Coach Ravinder Singh - running enthusiast and coach; team member, Run with Me Foundation.

"I started running when I was forty. I am 48 now, running for eight years. I must admit, I am growing older but my timings are only getting better. If I can do it, anybody can, you just need to start somewhere and we wanted women to make that start," he noted.

Indeed, it was a start for most women out there. Interestingly, many realized the ill-effects of a sedentary lifestyle and vouched to stay active for their overall well-being. Some from our team members also walked, jogged or ran and finished the 3K run.

"Women should not neglect their health. This was just one of the platforms for hundreds of them to shed their reluctance and come forward. My only tip for the beginners would be to run. Don't look at your speed - run, jog, walk; running doesn't equal sprinting," concluded Coach.

What can be more empowering that witnessing thousands of women taking to the road, running for their health and the world stopping for them, letting them run past? It was my first ever marathon and by the end of it, I was exhilarated. It is never too late to pick up something, to make a start - for life is too short to remain in doubt, to be reluctant and to never make a move. Always remember, in the end nothing but your health shall remain, it is like an investment fund where your returns shall always be in bountiful.