The Big Benefits of the Little Noni Fruit 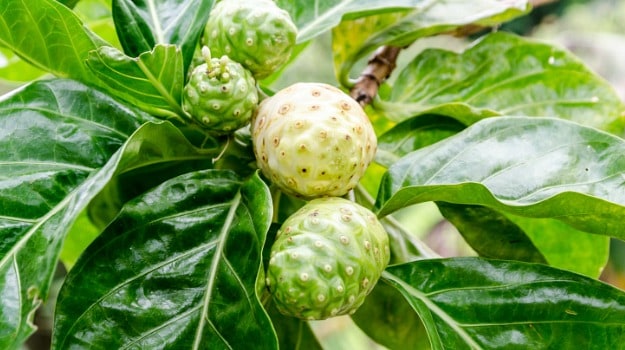 Noni or Indian Mulberry, the fruit of the Morinda Citrifolia tree, is actually a species of the coffee family - and like coffee, it is a stimulator, but not in the way you would imagine. Native to Southeast Asia and Australasia, the Noni fruit has been particularly well revered in Hawaii, where it is a part of many traditional medicinal remedies.

(12 Superfoods You Should Know About)

The noni plant is a source of antioxidants, Vitamin C, and potassium. Every part of the shrub - from leaves to roots, has been used to treat a variety of ailments.

(The Anti-Inflammatory No One Told You About)

Many of the medicinal benefits though, are largely attributed to the fact that the noni plant is a source of phytonutrients - which have anti-inflammatory, anti-viral, and anti-bacterial compounds, known to boost the immune system as well as repair cellular damage.

In India, ancient ayurvedic texts mention noni, or ashyuka in Sanskrit, as a remedy to stimulate internal cleansing by treating parasitic infections of the stomach and for asthma, as well as a an external remedy to treat joint pains and for the skin ailments and as an anti-ageing solution.

(Fight Off Cough, Ulcers & Constipation With this Desi Superfood)

Traditional healers in the Pacific Islands have been using noni for centuries, as a general wellness tonic - to cure almost any ailment. Today, noni is also considered to be a treatment for Cancer and HIV, though the U.S. based Food and Drug Administration (FDA) says it requires further scientific evidence before approving the medicinal value of these claims.

The potato-sized noni fruit itself is not pleasant in taste, and does give off a slightly strong odor, so it is more commonly taken in the form of juice. For those who don't have access to the fresh fruit, juices are available by the bottle. However as the juice is quite bitter, producers will often sweeten it for sale, so it is always advisable to check the quantity of sugar added in the ingredients, before purchasing. The beneficial properties decrease with added sugar and processing.

(Gluten-Free Amaranth: Why is it a Superfood?)

The Healing Powers of Noni

Although the fruit eaten as is provides the best remedy, the juice is the most practical option for most people.

Fruit Juice: When used externally, it works on head lice. When you drink it, it helps with diabetes, high blood pressure, headaches, stomach ailments, heart disease, gastric ulcers, circulation problems, to stimulate menstruation, lowering cholesterol, fever, cough and cold, relieve high blood pressure, arthritis, AIDS, cancers, and poor digestion, stroke, weight loss, and any sort of infection. It is even considered to be an excellent treatment for senility and depression.

In the US, experiments have been done with giving noni juice to rehabilitate drug addicts. There are positive claims that it works well as a treatment.

Noni Tea: Made from the leaves, noni tea contains antioxidants and works as an anti-ageing treatment. It is also beneficial for digestive issues, and works as a cure for diarrhea, nausea, vomiting, food poisoning, and intestinal worms.

The preparation of the tea, however, is unlike the juice, and has higher sugar content - so can actually be harmful for those with diabetes and liver problems. Some also say noni tea used externally is also beneficial for preventing greying for those with darker hair, as well as a hair-loss treatment.

Noni Leaves: Wrapping noni leaves around affected areas can cure arthritis, sore and swollen joints, stomachache and headache. A mixture of raw fruit and leaves is a cure for skin infections such as boils, and bruising.

In the Polynesian Islands, root preparations were used to heal sting-ray and jellyfish wounds. The bark was also traditionally used as an aid for mothers giving birth.

However, since noni is a stimulant, it does cleanse the body, in order to heal it. This means though that if one has weak liver or kidneys, it is advisable to refrain from taking noni internally. This also applies for those taking blood-thinning medications or anti-water-retention pills. Pregnant women should not take noni.