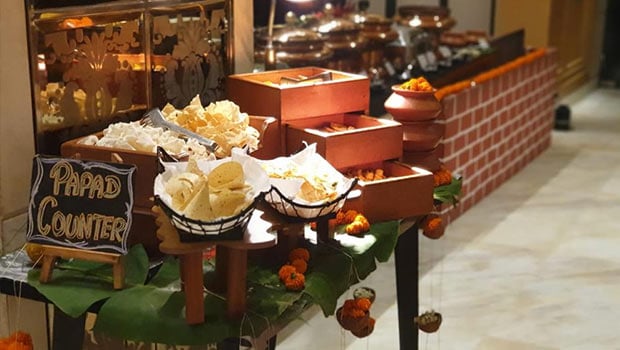 The phrase south Indian food musters only the thought of the all-embracing idli and dosa in the minds of North Indians. But believe it or not, idli and dosa are to south India what chole bhature is to the north: one of the many things eaten just during breakfasts. South India comprises five different states with each state defining its own language of not just communication but food. The rava idlis of Karnataka are vastly different in their ingredients and technique than the podi idlis of Andhra, and the chutneys that are served with idlis are customised to local ingredients and likings.

Idlis, dosas, and vadas are just the tip of the iceberg. The five coastal states of south India, with very rich history, have so much more to offer. How we wish we could travel to each of these states and soak in the spices and taste of local ingredients and their special offerings. Well wait; don't be upset because Crowne Plaza Mayur Vihar is set to offer the next best thing: The Dakshin Food Festival.

Authentic flavours of southern states - Tamil Nadu, Andhra Pradesh, Karnataka, Telangana and Kerala cuisines are the main attraction of Dakshin Express Food Festival. Executive Chef Diwas Wadhera has carefully designed the menu after exploring these regions for months. He met with some of the top chefs of different regions, and also some homemakers, food historians, and farmers to bring to you this exclusive menu of mouth-watering dishes.

Some of the things that we tasted were Podi Chicken Tikka (chicken with gunpowder dressing), Karawayi Fish Fingers, Andhra-Style Paneer Tikka, and Tomato Rasam for starters. The Chicken Chettinad and Mutton Korma are a must-try. We kind of had mixed feelings about the Appams, but we also understand that making Appams is no easy task! We strongly suggest, that you Do Not Forget to try the Masala Chaach and Watermelon Cooler.

Roll your sleeves up and get ready to dig in the flavourful food of the South.