Padmanabham: The New Restaurant That Offers Classic South Indian Food With Options Beyond The Regular Idli-Dosa

Padmanabham is one restaurant which is truly a gateway to a gamut of South Indian culinary experiences. The fare ranges beyond classic South Indian. 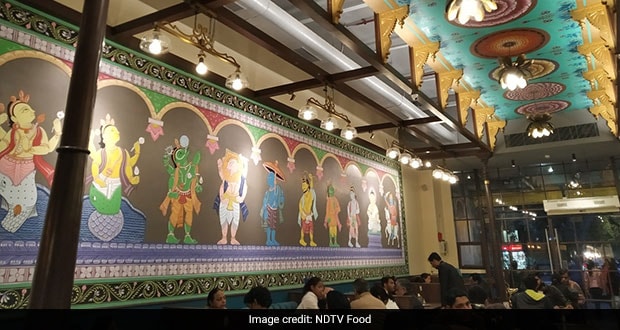 Traditional South Indian dishes such as idli, dosa, sambhar and vada are found aplenty within Delhi. But when it comes to options beyond these staple dishes, we struggle to name a single restaurant that has it all. The newest entrant on the block, Padmanabham, is here to change exactly that. This is one restaurant which is truly a gateway to a gamut of South Indian culinary experiences. The decor of this spacious restaurant was reminiscent of the kalamkari paintings and mandala artworks traditionally found in a South Indian temples. The name itself, Padmanabham, has originated from the famous Lord Padmanabhamswamy temple found in Trivandrum, Kerala.

Everything in the restaurant, from the chefs to the decor and to the music seemed like it was fresh from the Southern states of the country. The first few dishes brought to the table themselves proved that with a gamut of flavours as wide as those in South Indian food, nothing is impossible. This is even more creditable considering that Padmanabham is a pure-vegetarian restaurant. Thus, dishes that are traditionally made with meat have been repurposed and given a new lease of life in their vegetarian counterparts.

Some of the dishes that were truly commendable were the starters - the Mushroom 65, which was mushroom fried in rice and chilli batter, had a taste that lingered on in the mouth for a while. Another appetiser that was something different was the Idiappam and Kadala curry, which is a flavourful black gram curry which was comforting and so delicious! Puttu, which was a cylindrical-shaped cake of rice and coconut powder, was also served with the curry. This combination was something that far overpowered that of the traditional Idli and Vada Sambhar. The Paniyaram was also a mentionworthy starter that basically had round balls of a rice and lentil batter, which was cooked until crispy and served with the three traditional chutneys.

Although the snacks were quite satiating and filling, the main course still remained! Also known as 'Bhojanam' in the Padmanabham menu, it was served on a banana leaf with dishes from the state of Karnataka. Along with the accompaniments of red and white rice, there were served upto six different vegetable combinations! There was also some refreshing rasam, spiced buttermilk and papaddum and banana chips as sides. Every dish was equally delicious and flavourful, cooked to perfection. A special mention for the delightful sweet payasam, which was served warm and couldn't be had enough of.

The meal ended with the South Indian staple filter coffee. Another drink which we would recommend is the sweet Naruneendi Sarbath, which was perfect to wash down the spicy dishes. Everything right from the starters to the main course to the dessert to the drinks, was made with a lot of love and affection; just as it would be in a kitchen at home in the South. The delightful intermixing of flavours left us wanting more - maybe in another visit, with a larger appetite this time!