10 Christmas Foods Around the World

You'll have a giant, alcohol-soaked Christmas cake reposing in your kitchen. These traditions are old, comforting, well-worn. But they aren't the only ones - each country has its own set of traditional foods that are brought out in December. 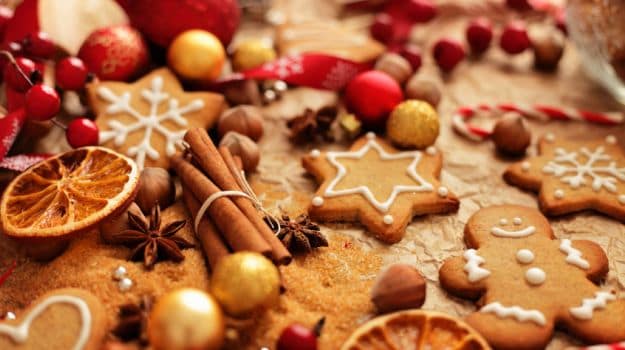 Highlights
Perhaps, dear reader, you (like me) will be popping a roast into the oven, come Christmas day. And perhaps, you'll be dowsing your Christmas pudding in alcohol and setting it afire, to oohs and aahs from everyone around the table. Of course, you probably have a whole rainbow of Christmas sweets such askulkuls, milk sweets, guava cheese, neuris, and others. And most likely, you'll have a giant, alcohol-soaked Christmas cake reposing in your kitchen as well. These traditions are old, comforting, well-worn. But they aren't the only ones - each country has its own set of traditional foods that are brought out in December. Here's a closer look at ten of them.

Speculaas or speculoos is a gentle, delicately-spiced, shortcrust biscuit that comes from the Netherlands and Belgium. They're certainly popular at Christmas, but they are traditionally baked for Sint Nicolasfeest (St Nicholas day) on the 6th of December, which marks the beginning of the Christmas season. Convention dictated that they be fashioned into windmill shapes, but nowadays, you can mould them into any symbols or characters that hark back to Christmas traditions.

(Also read: What is the Story of the Ginger Bread House?)

Stollen is a sort of sweet bread, speckled with candied fruit, nuts and sometimes marzipan, and is a product of Germany. Historians have traced it as far back as the year 1400 in Dresden! Alas, it is often quite dry, especially for Indian tastes. Luckily for us though, shops selling stollen in India have adapted it slightly to our palates.

Leaf bread, tantalising, wafer-thin, wouldn't look out of place in fairyland. In actuality, it comes from Iceland, or specifically, the north of Iceland, and it has now filtered down to the rest of the country. According to the website of the National Museum of Iceland, "It was at times difficult to obtain the raw materials needed to make the bread, especially during the time of trade monopoly, and therefore bread and other grain products were only eaten by the general public at holiday times. The tradition of the leaf bread comes out of this reality and thus a wafer thin bread was baked at Christmas in order to make it possible for everyone to have a bite." The dough is rolled to a very fine thinness, then a patterned iron is used to stamp complicated designs on, and finally it is deep fried.

Panforte (which means 'strong bread') is a dense, chewy Tuscan confection dusted with sugar, that is packed with dried fruits and nuts, and spiced. Panforte is heavy with sugared citrus and melon, almonds, and boasts of a rather heavy hand of spice such as cinnamon, clove, nutmeg, pepper and cardamom, all of which give it a slightly more exotic feel. Traditionally, panforte appears to belong to two categories: dark - tinted with black candied melon and pepper (later even cocoa was added), and the paler one with vanilla and icing sugar.

Also from Italy comes panettone, a lightly-sweetened, cylindrical loaf that has been shot through with plump raisins and candied citrus peel. Not quite as sweet and indulgent as a Christmas cake, not quite as bready as a sourdough, it occupies a delectable liminal space. It's this in-between texture that is famously difficult to replicate in home kitchens - melting, decadent, but still airy and light as a feather.

From France, comes one of my favourite Christmas sweets, the buche de Noel (or the Christmas log). It's a chocolate roulade, fashioned into the shape of a log, frosted with silky buttercream,  and adorned with the prettiest marzipan shapes, in order to replicate the lit logs that families gathered around to stay warm in winter.

Don't be fooled! The name 'minced pies' is a red herring. Contrary to what you might expect, there is no actual meat in mince pies; instead, they are stuffed with dried fruit and spices. The beginning of the minced pies stretches all the way back to the 11th C in Britain, when meat was preserved for a long time through the use of spices, which later evolved into the mince pies we know and love today.

The Philippines is home to puto bumbong, a sort of rice dish that is made with a glutinous purple-coloured rice. The rice is usually garnished with a dollop of butter and a heap of sugary, shredded coconut. This is wildly popular during Christmas, when Filipino vendors do brisk business selling it.

Carp on Christmas eve is a Polish tradition that goes back to World War II (although carp farming in Poland is at least 700 years old). Carp is usually accompanied by sauerkraut and potatoes, which is usually prepared a day in advance. Fish soup is also another traditional Christmas Eve dish. Of course, the table is also laden with sweets afterwards. Anything from gingerbread cookies to strudel (a sort of paper thin, layered pastry with a sweet stuffing) to vanocka, a buttery, braided bread, similar to the Jewish challah bread. The Christmas variation of vanocka is made with dried apricots and raisins that are soaked in rum or brandy and laced with anise.

Let's end this story with perhaps the oddest Christmas food I've ever heard of — Japanese KFC! Yes, you read right; Kentucky Fried Chicken has its clasp over Christmas in Japan, thanks to an exceedingly influential advertising campaign in 1974 - ' Kentucky for Christmas!' Nowadays, KFC puts out special Christmas menus, with chicken, cake and wine (which have to be ordered well in advance), while Colonel Sanders dresses up as Santa Claus and parades around outside its outlets. It's all a rather bizarre paean to Christmas consumerism