Avial, The Dish Some Say Was Invented By One Of The Pandavas

Avial is a creamy vegetarian curry that is made with curd and coconut milk, along with a variety of seasonal vegetables. A variation of it is to prepare it as a thick vegetable dish, which is then enjoyed as a side 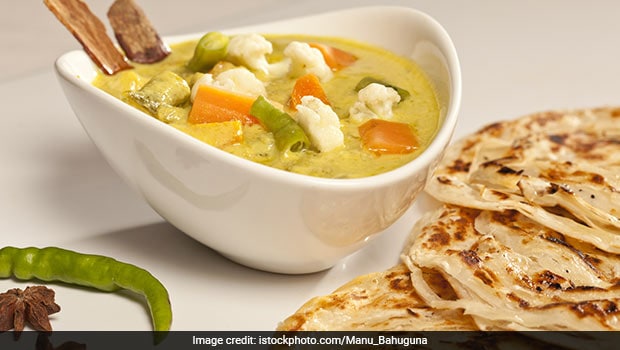 Highlights
Besides being known as one of the most beautiful places to visit in India, it is also Kerala's local cuisine that stands out for its various lip-smacking preparations. Full of flavour, it's hard to get over the spicy stir-fries and meat roasts, nourishing curries, biryanis and the fluffy appams. Even some of the most simple dishes make an everlasting impression, such as the Avial, known to be the most-loved comfort food among the locals. Avial is a creamy vegetarian curry that is made with curd and coconut milk, along with a variety of seasonal vegetables. A variation of it is to prepare it as a thick vegetable dish, which is then enjoyed as a side. A tadka of curry leaves fried in coconut oil is poured on top before serving the dish, enhancing its flavour.

According to food historian K.T. Achaya in his book The Illustrated Foods of India states that "Avial or Aviyal is a vegetable dish of Kerala that uses green bananas, drumsticks, various soft beans and fresh coconut gratings. These are first cooked in coconut milk and then tossed with some aromatic coconut oil and spiced sour curd. The product served as prasadam in the Padmanabhaswami temple in Thiruvananthapuram, does not contain the inauspicious mustard seeds."

There are many stories to the invention of Avial

Onam Sadhya, or the grand vegetarian feast of the Malayalis to celebrate the homecoming of the mythical king Mahabali during the harvest festival, has to include Avial as one of the items of the 26-course meal. It was a beloved dish not just of the people but also the mighty kings who ruled the region during ancient times, as per legend. In fact, it is believed that Avial was invented by Prince Bhima, one of the five Pandavas, during their exile.

The Story of the Invention of Avial

There are many stories to the invention of Avial, though the one related to Prince Bhima seems to be most popular. According to Virata Parva, one of the 18 books of The Mahabharata, during the 13th year of their exile, the Pandavas lived in the kingdom of King Virata in disguise to avoid being detected by the Kauravas. As per the terms of the exile, if the Pandavas were detected they would be exiled again for another 12 years. To conceal their true identity, Yudhisthira took the role of a game entertainer to the king, Bhima as a cook called Ballava, Arjun as a eunuch dance and music teacher, Nakula as a caretaker of horses, Sahadeva as a cowherd and Drapaudi as a queen's maid.

There are various ways in which Avial is prepared

According to myth, Bhima or Ballava under his new role started carrying out various tasks in the kitchen, such as cleaning and chopping vegetables and helping in the preparation of the meals. One day, after everyone had finished their meal, an unexpected guest arrived at the palace. It was Rishi Durvasa, who was known for his ill temper and the habit of cursing if not offered the best hospitality. Bhima had the task of cooking up a delicious meal for the Rishi to avoid his rage, but there wasn't much food in the kitchen other than a handful of vegetables.

With hardly having any time at hand, Bhima quickly got down to preparing a dish using whatever ingredients that were available in the kitchen and created Avial. Luckily, Rishi Durvasa was immensely pleased with the meal and left the palace satisfied. The dish soon started being raved about, becoming hugely popular in no time.

There are some, however, who do not support this story, and instead give credit to the King of Travancore for instigating the idea of creating Avial. It is said that a grand feast was held by the king for his people, and everyone across the kingdom came for it. Soon the kitchen was running out of food, miscalculating the huge turnout. When the King inspected the kitchen, he found that various parts of vegetables were wasted while chopping. He ordered his cook to collect those pieces and quickly make a curry to serve the people, and thus Avial was invented by his cook.

Whatever maybe the theory, food lovers are grateful that the novel idea struck someone and resulted in creating one of the most nourishing curries in India, which has the power to please one instantly with its simple flavours. Team it with rice and it is soul food.

How to Prepare Avial

There are various ways in which Avial is prepared. A variety of vegetables can be used as per one's linking, such as eggplant, beans, yam, pumpkin, raw banana, drumsticks, gourds, carrots, cucumber, etc. The addition of coconut milk lends to its creamy texture while the tempering of curry leaves adds a distinctive favour to the vegetarian dish. Of course some also like to add in other spices like black pepper, cumin, green chillies, mustard seeds, among others.

If you would like to try your hands at preparing this legendary dish at home, here's a favourite recipe

Savour the simple flavours of this traditional dish from Kerala using seasonal vegetables.