Bhakarwadi: A Popular Snack You Believe is Maharashtrian Actually Belongs to Gujarat 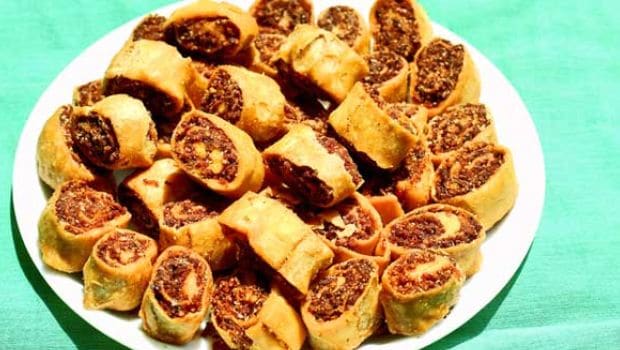 The favourite item of choice at Pune's Chitale Bandhu is a deep-fried disc of dough, stuffed with a wealth of spices — it unites the gentle sweetness of dried coconut, and the musty, warming flavours of poppy and sesame seeds plus, cumin seeds, with the tang of dried, powdered mango, and the potency of chilli. It is the perfect commingling of spice with crunch, the ideal snack with a cup of steaming chai, and especially right now in the monsoon. What is this delightful creation? It is bhakarwadi, darling of Maharashtra and Gujarat, and one of the highest-selling items over at Chitale Bandhu shops; a swelter of stores who soared their brand to fame through the little snack. But first things first.

Bhakarwadi is a beloved Maharashtrian snack, but its origins lie in Gujarat — it is a popular addition on the Farsan menu, adding crunch and a warming, spicy-sweetness to the menu. A visit to Jagdish Farsan, in on New VIP Road in Vadodara, will convince you of the snack's popularity. Jagdish Farsan is a hallowed farsan store, having doled out all manner of snacks to a clamouring clientele from 1938; chevdo (all sorts), fulwadi, salty crunchy chana dal, wafers, sev, bhel and mithai are all sold here. The store also doles out fresh, hot snacks; the menu is crowded with patra, khandvi, dal wada, idada, bhajiya, and sevkhamni. For the freshest bhakarwadi, it's best to get to the shops early; doors open as early as 6 am!

Behind the scenes, in huge kitchens slippery with oil, practiced chefs roll out bales and bales of clingy besan dough, slathering a secret spice mix within, and then tug and roll them into perfect little cigarettes, that are flattened and sliced into bhakarwadi. These little whorls are then dunked into enormous kadhais of bubbling oil, from whence they emerge spackled with a beautiful golden char. The trick lies in the perfect balance of its ingredients and the precise stuffing, which shouldn't leak out when fried. The Gujarati bhakarwadis are sweet, laced with a hint of sourness and spice, and Jagdish Farsan has been preparing them for more than 80 years. It is said that the grandfather of the current owner, invented the snack.

It reached Maharashtrian plates in a big way though, when Raghunathrao Chitale first tasted the little snack, in 1970. Struck by its potential, he inflamed it with more spice, making it more suitable for Maharashtrian palates, and started selling it at their store, Chitale Bandhu, in Pune. Chitale Bandhu, open from 1954, was originally a dairy store, also selling sweetmeats, such as amba barfi, pedas and shrikhand. But when snacks such as bhakarwadi were introduced, sales soared. Bhakarwadi became wildly popular, prompting the Chitales to try and automate the process of making these bronzed snacks.

Chitale Bandhu and the Art of Automation

The current owner's grandfather, toured Japan in the 1970s, as part of a delegation sent by the Maratha Chamber of Commerce. It proved to be quite the inspiration. Licenses were applied for, huge manufacturing machines were designed and imported from Europe, and in 1989, the process of partial production of bhakarwadi had begun. Today, the process is completely automated.

The little bhakarwadi helped inch the fame of Chitale Bandhu store to tremendous acclaim, so much so that they opened a branch, which at the time, was an unusual thing to do. Later of course, multiple franchisees popped up across the city, and their products spread all over India, in Maharashtra, Gujarat, Andhra Pradesh, and Madhya Pradesh. Thankfully for us Mumbaikars, a Chitale Bandhu Mithaiwale was also opened in Mumbai, in Prabhadevi.

There is no doubt that thanks to Chitale Bandhu, bhakarwadi is now synonymous with Maharashtra. A quick poll among my friends revealed that almost all of them believed it to be a Maharashtrian snack. It used to be almost a pilgrimage of sorts for some friends when they were little, to travel to Chitale Bandhu with every visit to Pune!

It takes a little effort to make this snack at home, but luckily, you get bhakarwadi everywhere now - all farsan shops stock it, and now there are even low-fat versions. You'll find it scattered across Chivda Gali in Lalbaug, too. Bhakarwadi comes with all types of toothsome flavours - with a dry fruit filling, savoury garlic and methi options, and there are plenty of recipes of bhakarwadichaat, as well. You will also find flax seeds bhakarwadi (yes!). These have grains, pulses, flax seeds and soybeans, which make it an excellent (albeit slightly unsatisfactory, in my opinion) snack for those watching their cholesterol and weight. I might buy a packet yet!