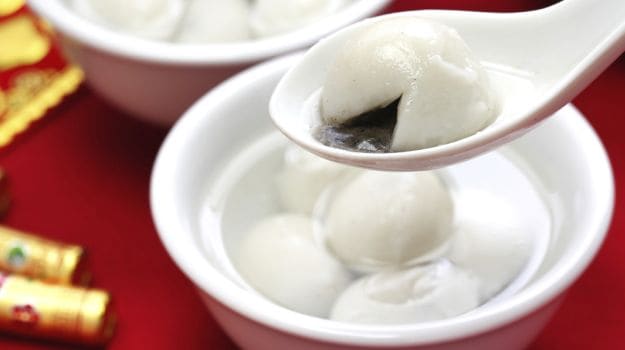 Tangyuan - a traditional Chinese dessert made of glutinous rice flour, stuffed with ground black sesame seeds and sugar. These are staple during the Chinese Lantern Festival (Yuanxiao) and any other get-togethers as its Chinese pronunciation sounds similar to that of the word 'Union'.

Food items and their consumption across the globe carry with them an underlying meaning, almost like a hidden logic, that's intelligible and sacred only to the locals. Every country has a food culture that takes shape around its customs and festivals. There are delicacies that are made only during certain special occasions and considered very auspicious. Such is the expanse and nature of food traditions that are emblematic of celebrating the bounty of nature and of course, good food. In this piece we set out to explore some of the most interesting food traditions and customs in Asia.

(Eating With Your Hands and Other Indian Food Traditions)

Food is a way of life. When knotted with religion and cultural beliefs, it acquires a completely new identity. Ingredients and traditional preparations are often associated with bringing good luck, fortune and harmony to the family. From the way a particular dish is prepared, to the way it is plated, positioned on the table and consumed - all bear significance in cultures around the globe.

(The Most Interesting Chinese Food Traditions)

Japan: The country celebrates a few festivals that revolve extensively around food. One of them would certainly include the harvest moon festival or the autumn full-moon viewing festival. It is all about celebrating the autumn harvest as well as the beauty of the moon. During this time, rice dumplings (tsukimi dango) are prepared in the households, which are shaped to resemble the moon, along with other preparations that are offered to the moon. Tsukimi parties are held in houses from where the brilliance of the full moon can be seen clearly. The area is decorated with pampass grass and people consume rice dumplings along with other delicacies made of seasonal produce like edamame, sweet potatoes, chestnuts and pumpkins.

Tsukimi Udon - Udon noodles topped with an egg, one of the staple tsukimi dishes.

India: Fish seems to be one of the most popular food items across cultures. From China, where it is believed to bring good luck, to India, where the Bengalis just can't seem to have enough of it. Bengalis create a never ending gastronomic affair with a variety of fish cooked in multitudinous ways. Interestingly, the cultural significance of fish among the Bengali community can easily be seen in their traditional wedding ceremonies.

Gaey Holud, popularly known as the haldi ceremony, is all about putting turmeric paste on the bodies of the bride and the groom as one of the many pre-wedding ceremonies. The groom's family carry the turmeric paste, bride's wedding clothes, jewelleries and other gifts along with fish dressed as a wedding couple. These are then given to the bride's family and are considered auspicious for the couple.

(10 Food Superstitions Over The Centuries)

Apart from these, there are other religions that follow customs around food and observe strict dietary preferences. For example, Jainism propagates strict adherence to non-violence (ahimsa), therefore they ensure that they consume items that involve minimal or no harm to animals and micro-organisms. Vegetables that grow underground are strictly avoided as the act of uprooting them results in harming many small insects and organisms.

(Jainism and Food: The Importance of a Satvik Meal)

The Empty Plate: Different cultures have differing concepts when it comes to dining etiquettes. In some cultures it is considered extremely rude to start eating before the eldest person in the family has begun eating. Similarly, the way cutlery is used or following courses is of the utmost importance. Interestingly, an empty plate has different connotations in different cultures. In India it is considered rude to leave food on your plate and is seen as disrespectful to the Hindu goddess of food, Annapoorna. The Chinese on the other hand, believe that an empty plate signifies that one is still hungry and wasn't given enough food; they always leave some bits of food on their plates.

These wouldn't even come close to summing up the innumerable global customs, traditions and celebrations tied around food. This was just an attempt at showcasing some of the few well-known ones. Just in case you know of any interesting ones, feel free to share them with us in the comments box below.