Happy Ganesh Chaturthi 2018: Everything You Wanted to Know About its Significance & Rituals 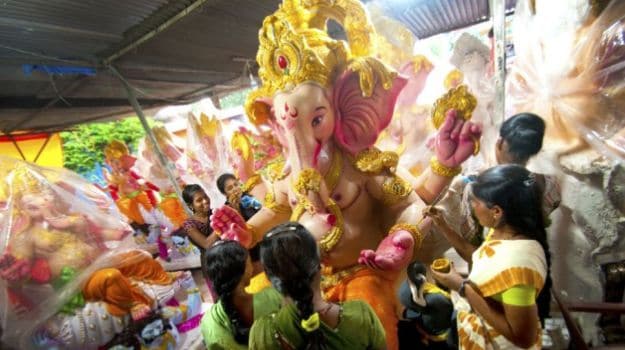 The end of the monsoon brings round one of Mumbai's most beloved festivals - Ganesh Chaturthi. Ganesha Chaturthi is celebrated by Hindus around the world as the birthday of Lord Ganesha, the destroyer of obstacles. Observed during the Hindu month of Bhadra (mid-August to mid-September), it lasts for 10 days, ending on the tenth day which is called Ananta Chaturdashi.

This year, it all begins on September 13th, 2018 when Ganesha idols are brought home and installed with great ceremony (sthapna) on a decorated platform. The idol is offered pure water along with libations such as honey and milk. Author and blogger, Shakti Salgaokar-Yezdani says that "In our home, my grandfather Jyotirbhaskar Jayantrao Salgaonkar (who was a Ganpatya and a scholar on Ganpati) spent a few decades putting together special arrangements for bappa. We have a lovely wooden makhar, a special throne, special Paash and ankush."

A puja is performed twice a day until the idol leaves the home. On this day, the uttarpuja ritual (a sort of farewell) is performed, after which visarjan takes place i.e. the idol is submerged in the sea, river or even a token dip in a bucket (depending on where in the world you are). The final visarjan day sees Mumbai criss-crossed by throngs of worshippers trailing their idols to the shore. It is customary to bring home a smidgen of sand and the paat on which the murti rested before visarjan. Kept at home for a day or two, they serve as panacea for the emptiness brought on by Ganpati's departure.

"My grandfather said that the festival was designed to teach you about life. You celebrate someone coming into your life. You treat the (Ganpati) Bappa as a beloved guest, feeding him his favourite food, inviting people to see him, decorating the house. And then, with fond memories, you let Bappa go with a promise of the next year. 'If he doesn't leave, how will he come back?' grandfather would say with delight,"  Salgaokar-Yezdani reminisces.

Ganesh Chaturthi is celebrated across Indian homes but it is frenetic Mumbai that infuses it with the greatest community fervour. This is all thanks to the ceaseless efforts of Lokmanya Tilak who rightly believed that it would help to bring Indians together, during the freedom struggle. For ten days, the city is sprinkled with majestic Ganpati pandals. Perhaps the biggest is Mumbai's favourite Lalbaugcha Raja, who presides nonchalantly over an ocean of nearly a million visitors. The 12-foot tall Raja raises crores of rupees each year, and (like most of the other pandals) much of it is filtered back into the community through initiatives such as health camps, scholarships and hospitals. Similarly, almost every locality has its own pandal, ringing with the tintinnabulation of bells and bhajans through the day.

As the world keeps turning, Ganesha idols keep evolving. This year, you will spot a selfie-taking Ganesha, a Bahubali - inspired Ganesha with bulging biceps and plenty of environmentally-friendly Ganeshas (for example, Thane's Viviana mall has a papier-mâché one and fish-friendly ones are being made by an NGO called Sprouts). Navi Mumbai even has a Ganpati swathed in the colours of the Brazilian football team.

In Mumbai's satellite city, Pune, a clutch of pandals and temples celebrate the festival, the most famous being the Dagdu Sheth temple. Ganpatiphule's Swayambhu temple is another excellent place for Ganesha darshan.

Maharashtra's enthusiasm has recently seeped into Kolkata. A bouquet of pandals bloom across the city. Homes are decorated with alpona (a sort of rangoli made with rice-flour) and Narkel Narus (coconut and sugar sweetmeats) are distributed amongst friends and neighbours. Hidden away in the hinterlands of West Bengal too are plenty of Ganesha devotees. For instance, Hubli Dharwad in Karnataka has erected a 21 foot idol, thanks to the Dajiban Peth Sarvajanik Ganeshotsava Maha Mandal.

That's not all. Ganpati's so popular in Jharkhand that decorators are invited from Bengal for the perfect pandal. Jaipur's Mutt Doongari temple sees a slew of devotees, anxious to view the temple's famous modak tableau. And Hyderabad has one of the world's largest idols.

Ganesh Chaturthi is a pretty wonderful time for epicureans. It's modakseason, Ganpati's favourite sweet dumpling that has graced the plates of Maharashtrians for centuries. Popularly known as ukdiche modak, these rice flour dumplings are traditionally stuffed with coconut and jaggery and eaten warm with pure ghee. Sometimes, the modak is steamed with fragrant turmeric leaves. Today though, the modak has evolved into hybrid forms - infused with strawberry and chocolate; healthy baked modak and sugar-free ones are now available everywhere.


"Apart from modak, nivagrya are typically made on Ganpati day. Nivagrya are little savoury, steamed dumplings made from leftover "ukad" (rice flour dough) that was made for the modak casing. The leftover dough is mixed with cumin seed powder, coarse green chilly paste, salt, and other flavorings, flattened, and steamed. These are eaten with peanut oil and are quite a delicacy," says Saee Koranne-Khandekar, blogger, writer and food consultant.

"The Naivedya thali does not contain the pinch of salt on the side as other traditional thalis do. There is a small serving of kheer (usually made of gavhle, the Maharashtrian equivalent of orzo or vermicelli), puran (the stuff that goes inside a puran poli), chutney, pickle, koshimbir, a kothimbir dadi/alu vadi/batata vada, a dry vegetable, a gravy vegetable and/or sprouts, a dal or kadhi, plain rice with plain toor dal (varan bhaat), masala bhaat, and dahi bhaat. Ladoos made of besan are also considered a traditional specialty," she clarifies. And after all the celebrations, the festivities end with a whisper. "On the last day, after an overload of festivities, we pack off Ganpati bappa with a light meal of dahi bhaat or dahi pohe," she smiles.

Listen to the latest songs, only on JioSaavn.com
Disclaimer: