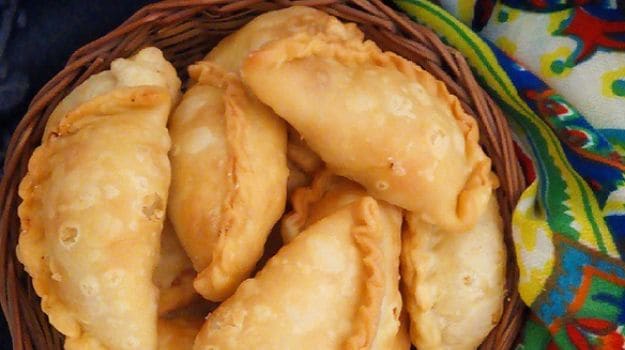 For some reason, “gujiya” has never been a gujiya in the family home. It seems like a peculiar Mathur-Kayastha (the community to which my grandparents and parents belong) conceit. But the khoya-filled dumpling has always been called a more masculine “guja”; the term of reference deemed perhaps a tad more sophisticated than the plebeian “gujiya”. Skimming through the pages of Madhur Jaffrey’s colourful portrait of her Kayastha upbringing and family life in old Delhi, I am relieved to find that the “guja” is not entirely my own family’s invention. It is a common legacy that perhaps belongs to the entire sub-sub-community, courtiers to the Mughals once upon a time, some of whom carry their burden of social superiority seriously to this day!

The gujiya is of course a pan-India festive special. Filled with khoya and dried fruits in the North, with coconut in Maharashtra, Karnataka and Goa, it is a common feature in homes across the subcontinent not just around Holi but also, sometimes, Diwali and Christmas. It is a sweet, fried munchy, enjoyed at room temperature. Well, mostly, except in homes like ours.

The other Kayastha peculiarity that I can remember from the time of my grandparents is the eating of the guja — piping hot, straight from the karahi. That was a treat that the family looked forward to. The days running up to Holi (and Diwali, the other big festival in our calendar) were perhaps as exciting as the day of the fest. Gujas/gujiyas would be fried three days before the festival — just in time for Rang Pashi celebrations. This would be the official ushering in of Holi: An evening of music, putting colour on the elders by younger members of the family (a ritual much more sober than the actual “playing” of colours on Holi), and heavy-duty food and drinking. Freshly fried gujas were brought out, and after making the mandatory small offering to the Gods, it was time to make a go at them.

Hot dumplings had their own particular flavour that none of the served-at-room-temperature gujiyas can perhaps match. The khoya, milk fats really, would be melting somewhat inside the casing of maida; there would be more of the caramalised sugar flavours and a strong fragrance of ghee, than other milk fat, in which the gujas were typically fried.

The bazaar-bought gujiyas that we see all around us, conveniently sold from halwai shops are no match for those simple but intense flavours. The only nuts that were mixed with the home-made gujiya/guja, at least in my home, were chironjee seeds and raisins, and the mix was fragrant with cardamom powder. This is a far cry from the “bastardisation” of the gujiya that is all pervasive. Fancy retail has meant that things like saffron now cover and flavour the humble maida. And also, often, there is a coating of extra sugar syrup on the dumpling — perhaps to make it sweeter and more commercially viable.

The Art of Making Gujiyas

And then of course there is that entire snobbery related to the pinching of the edges and the decorative pattern of folds of each of the dumplings. In traditional homes, this was an art form. As kids, we were pressed into service to complete the laborious task of hand-filling each guja/gujiya and then closing the casing by pressing together the edges into neat folds that had to be tidy and pretty-looking. If the exact folds in a dim sum are prized and if dim sum making is elevated to an art form, gujiya-making may have been the same thing—except for the advent of the molds. Like cookie cutters, they made life of the cook much easier but much less interesting and beautiful.

Hand-made gujiyas are now a lost or dying legacy of our pasts. But the fact that the sweet remains popular despite the globalisation of the palate – and despite the prevalence of the likes of “chocolate gujiya” in our midst— is meaningful in more ways than you can perhaps imagine.

The gujiya is a reflection of India’s composite past—just as the samosa is. If the samosa travelled from West Asia and the Mediterranean to India, replacing the filo sheets and minced meats with maidaand aloo, the gujiya is a dish with similar history. It belongs to the same genre as the samosa. Both have maida as the covering, and it is just the filling and the shape that got altered along the way, as inventive Subcontinental cooks played with ingredients and techniques.

Like the samosa, the gujiya too is a medieval dish then. It reflects a fusion of identities in India—and a fusion of tastes that took place particularly in the Mughal era. Ideas from the West, travelled East and found much vibrant cooking material in India. The local popular filling of khoya became a substitute for meat, frying—the popular Hindu way of cooking pucca and festive khana—took precedence in terms of cooking techniques and the filo was replaced by maida. As we bite into one, that is a bit of culture we should savour too.