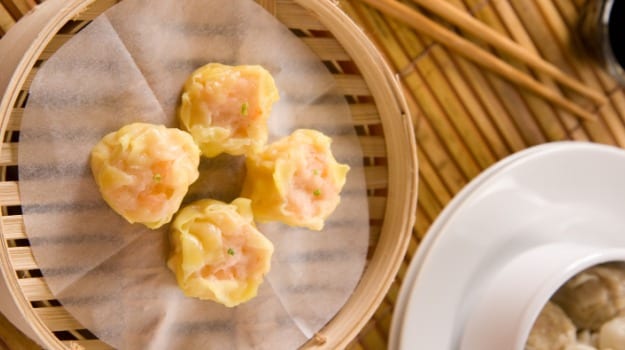 Hot, steamed meat and vegetable dumplings were the star delicacies at Rongali - destination, culture, harmony, a festival of Assam which aimed to highlight, among other things, ethnic delicacies of the Northeast. Chinese cuisine too was lapped up by the festival visitors.

"Momos are in great demand, especially because of the winter season. About 40 percent of the food items that we sold were momos only. I know momos originated in Nepal, but it has become a part of the northeast cuisine. I don't see any problem with that," a restaurant in-charge shared.

"It's always nice to embrace anything that's good even if it's from some other state or country as long as we are not neglecting our own," said Pradeep Rabha, in charge of two-year-old restaurant Rock De Northeast at the three-day festival where over 20 stalls were dedicated to food.

Which is exactly why he ensured to bring along ethnic dishes like Naga pork and chicken made with bamboo shoot to the fest. The festival concluded on Sunday at Sonaram field in Guwahati and was organised by a socio-cultural trust of Assam Trend MMS in association with Hotel & Restaurants Association of Assam, Assam Tourism, department of cultural affairs, the government of Assam, and the union Ministry of Youth Affairs.

Purbajit Chetia, who participated in the fest for a friend's brand called Lakhimpuriya Athithyo, said: "Momos are the best appetizer. Most people eat them here as well as in the entire Northeast region."

Wok by the Lake eating joint's partner Anish Das said momos and fried rice had many takers unlike.

One of the visitors noted: "We have Assamese food at our home. So, why should we spend money on something that we can cook at home?"

Another visitor said: "If the festival organisers are able to get tourists, then it makes sense to educate them about our dishes. But if a majority of festival goers are from here only, what's the point? We are aware of our food habits and dishes."

But there were some who were seen indulging in ethnic appetizers like chicken khoika.

Kaushik Kalita, food and beverage executive at Hotel Gateway Grandeur, said: "We have different restaurants that serve ethnic food and multi-cuisines. I won't say that people are not going for ethnic food at all. We mostly sold chicken khoika. It's just like a tandoori chicken, but the style of cooking is different."

Masala dosas and jalebis were also spotted on a a lot of tables. "People here like South Indian food as well. Our masala dosas are doing really well," said Sanjay Kumar Jain, director of Kiranshree Sweets and Snacks.

While momos as well as Chinese and South Indian food had many takers, Karpum Pegu wasn't that satisfied with the sale of about "50-60" burgers from her stall.