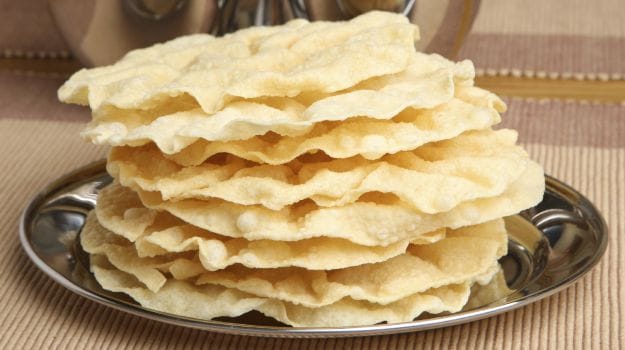 It is no crispy affair for the papad manufacturers in Tamil Nadu as a sudden spurt in the price of urad dal, a main ingredient for making the delicacy, has put the industry in dire straits.

The crunchy papad or the traditional 'appalam' in Tamil occupies is served as a side during meals at any function in the state. However, as the price of urad dhalhas been witnessing a steep rise, papad manufacturers have begun knocking at the doors of State and Central governments seeking intervention. "We've never experienced such a situation in the past. There has been a steep hike in price of urad dal recently," Tamil Nadu Appalam Manufacturers Welfare Association President Surendran told PTI.

The price of urad dal has trebled since last year from Rs 6,000 per quintal to Rs 18,000 a quintal now, he said. "Due to this sudden increase, most hotels have stopped serving papad during meals to customers. I came to know they compensate by issuing chips or something like that." According to him, the Rs 750 crore papad industry employs about 3.50 lakh people. "There are more than 5,000 companies involved in this trade. About 75 per cent of them are women."Surendran alleged that due to 'online trading' and 'hoarding' by manufacturers there is a spurt in the price of urad dal. He said the association raised the issue when Union Commerce Minister Nirmala Sitharaman was in Coimbatore last week. "After hearing our plea she assured us that the Ministry
will look into the matter," he said. "What we want is, just like the Government decided to import onions to check prices, our state government should also take some kind of remedial action, considering the issue."

He shared that papad manufacturers are finding it difficult to run factories even for two days because of shortage of urad dal. "Earlier the factories used to run for five or six days a week. But now we are finding it very difficult to run them for even two days," he said. 'Papad' is not only sold in the local market, but is also shipped overseas. This has affected the exports which have dwindled. "About 30 containers each consisting of 18,000 kg of papads were earlier shipped annually to various countries
from places like Chennai and Mumbai. But, now, it has declined drastically to five or six containers."

Comments"We have sought appointment with state government officials so that we will be able to explain our situation.Hopefully, we should meet them next week," he said.