From the Kitchens of Hyderabad's Nizams: Haleem, Biryani and More 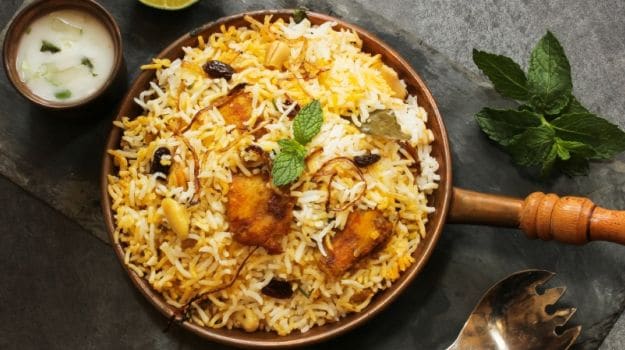 Hyderabad has always been irrevocably entwined with its food. In Charmaine O'Brien's Penguin Food Guide to India, I read that Hyderabad state's official flag had a symbolic representation of a kulcha. "It was there because, legend has it, the first Nizam consumed seven kulchas in the presence of a Muslim holy man who then prophesied that the Asaf Jahi dynasty would last for seven generations. It is fitting that the flag has bread on it - the Nizams certainly made Hyderabad famous for its food."

Nizami courtly food was renowned for its ostentatiousness, "crushing pearls into dishes; distilling quail and venison into alcohol; and serving hundreds of dishes at banquets," writes O'Brien. It was a meat-heavy cuisine, something that has passed down through the centuries (although thankfully the extravagance has been curtailed) and is manifested in the many non-vegetarian dishes that Hyderabad is today known for.

I fell into my love for Hyderabadi food much like everybody else - through the charms of its delectable kacche gosht ki biryani, an undeniably courtly dish that many believe has its origins in Mughal kitchens (although Pratibha Karan's Biryani throws this belief into some disorder). Some people consider it to be India's only proper biryani since it is made from raw meat and rice that are cooked together rather than the pakki biryanis that are made by layering separately cooked meat and rice together. The jury is still out on that one. Although kacche gosht ki biryani is the state's most well-known biryani,Hyderabad (and Telangana) also have others: the celebratory Kabuli biryani that is pure vegetarian, the kairi ki biryani, the tart karonde ki biryani and the gentle-tasting doodh ki biryani.

It was in Nizami courts that Afghan, Persian and Turkish aristocrats came, bearing a wide variety of culinary influences. Naturally, Nizami food is where cultures met: the cuisine as it has come down to us, is a blend of Persian, Arabic, Mughlai and Turkish with traditional South Indian influences (Safedmirchi ka salan, for instance, is prepared using dry coconut and is the Hyderabadi biryani's loyal sidekick). Intrigued by the various, seemingly disparate strands sewn together, I turned to The Jewels of Nizam: Recipes from the khansamas of Hyderabad, a book on rich, courtly Nizami food by Geeta Devi. Geeta Devi is a food consultant, instrumental in relaunching the Hyderabadi speciality restaurant named Jewel of Nizam and "hails from the Malwala family of the late Raja Dharam Karan of Hyderabad, who came to the city with Nizam ul Mulk, the founder of the state."

Naturally, any Nizami spread would be unthinkable without haleem, the signature stew of meat and broken wheat which is served with onions, lime and sometimes chilli. Said to have originated in Persia, it was refined in Hyderabadi royal kitchens and takes hours to prepare, the meat's long, torrid bath in the grain transforming the dish completely. Luckily, the recipe Devi provides takes only about an hour, although the wheat rawa requires an overnight soak in water. She writes that it is "mostly prepared and eaten in the month of Ramadan, (and) is made in pure ghee. Its rich, high satiety value helps offset hunger during the fasting period. The slow cooking helps bring out the flavours of the mutton and the spice."

Haleem is not the only dish made of grain and meat. There is also chakoli, made of wheat flour and meat blended in a gravy made of curd. The addition of wheat flour in the dish cannily does away with the need for accompanying rotis. The Nizams have also been credited with the birth of the kheema khichdi, made from lamb mince, Basmati rice and masoor dal, (although some don’t add the lentils at all). The mince is spiced and cooked with the dal and chawal in a sealed pot. The khichdi is usually served with tamarind chutney on the side, papad and pickle. I remember reading about a Nizami khichdi that was once prepared by Chef Arun Sundararaj of Taj Hotels. It was a royal dish, apparently made of 30 ingredients including partridge, almond paste, lamb and chicken. But this was rare. Most kheema khichdis are made at home with far fewer ingredients.

Promoted
Listen to the latest songs, only on JioSaavn.com
In Geeta Devi's book, many of the recipes are goat dishes, the flavour of the meat embellished with a blend of nuts and dry fruits such as in magzeyti dulme. You will find mutton pickle, fish pickle and prawn pickle; she has also included several tongue, brain and kidney dishes, including a biryani made from goat's kidneys. But I was especially drawn to the aamras ke kofte, which I am going to make once mango season comes around. The kofte are prepared from a blend of mincemeat, Bengal gram and mango pulp, then cooked on a slow flame until silk-soft, a fascinating dish that "speaks of the ingenuity of the khansamas, the cooks of the Mughal royalty."

Naturally, there is plenty more to but I'll end now on a sweet note. Khubani ka meetha and shahi tukde take pride of place in the Nizami pudding lexicon, but Devi also offers the recipes for anokhi kheer, prepared with white onions and gilai firdaus, a sweet made by cooking grated pumpkin in milk, with sugar and elaichi. Badam ki jali is another sweetmeat made with khoya and almonds and the quaint ashrafi is modelled on coins from the erstwhile Nizami era. It is a coin-shaped sweet stamped with the Nizam's seal, a sweet throwback to times gone by.