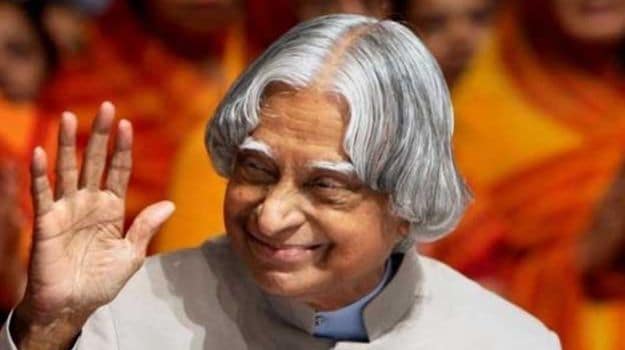 Former President, Bharat Ratna recipient and the father of India's nuclear programme, Dr. APJ Abdul Kalam was all of this and much more. His was a life of selfless, humble living that exhibited an undying love for children and a never ending quest for knowledge and its dissemination. On his first death anniversary, we remember this great icon who inspired millions.

Dr. Kalam once said that he began his tenure at the Rashrapati Bhavan with two suitcases brought along with him and he would go back to the world after finishing his term with the same two suitcases. Shekhar Gupta once interviewed him and asked what was there in these two suitcases to which Dr. Kalam replied, "One of it will be capable of meeting two day's requirement if I am to go somewhere. It will have a newly published book, sometimes my computer, my tape-recorder and two days' clothes."

For a man of such great stature, it was refreshing that simplicity was his preferred way of life. Dr. Kalam was born in Rameshwaram, Tamil Nadu. The "Missile man of India" had a tough life but his desire to achieve his dreams got him a graduation degree in Physics from Madras University. Dr. Kalam's father owned boats which he rented out to local fishermen. At times Dr. Kalam would distribute newspapers to support his family and pay for his studies. The initial days were full of struggle, but they only led to shaping his personality. We know of him as a sun that shone bright with all his might, making the entire nation proud of him.

Dr. Kalam was very close to his mother and the food cooked by her was his favourite. In his book, Pride of the Nation: Dr. APJ Abdul Kalam, Mahesh Dutt Sharma writes, "Dr. Kalam had very close bond with his mother Ashiyamma." His favourite mom-cooked food was rice and sambarwith coconut chutney. "I often used to eat food with my mother in the kitchen. She used to serve my favourite dish on a banana leaf," Dr. Kalam related in the book.

Dr. Kalam was a man with a purpose and let nothing affect his work. One of his classmates, the Former Associate Director of Defence Research and Development Laboratories (DRDL), noticed how from college days to the time when he became the President, there were barely any changes in his lifestyle. He was a vegetarian, who gave great importance to eating right and staying fit. He was a workaholic who worked close to eighteen hours a day. When Shekhar Gupta asked him if he ever got sleepless nights while he was starting his term as the President or when he had to take any crucial decisions, he amicably replied, "I anyway go to bed quite late."

Dr. Kalam was a vegetarian and traditional South Indian preparations would typically constitute most of his regular meals. He loved traditional Iyengar food like Vendhya Kozhambu and Puliyodare. But how did he embrace vegetarianism? Turns out that it was a practical choice that he made. Telegraph India reports that Dr. Kalam turned vegetarian during 1950's when he joined Saint Joseph's College, Tiruchirappalli. He was on a scholarship and on a student's budget that could barely afford non-vegetarian meals. "Economy forced me to become a vegetarian, but I finally started liking it. Today I am 100 per cent vegetarian. Wherever I go, as long as I get a hot vegetable dish, I am okay. If I am in Gujarat, I have Gujarati food, if it's Shillong, it's North Eastern," Dr. Kalam was quoted by the daily.

One of the popular dailies quoted Dr. Kalam's friends and colleagues reminiscing the good old days with him. "We lived in Indira Bhavan lodge in Thiruvananthapuram. People there called him Kalam Iyer because he moved around with Brahmins and had similar eating habits. The only non-vegetarian food he ate occasionally was egg masala along with Kerala parottas," noted R. Aravamudan, former director, ISRO's Satellite Centre, Bangalore.

R Aravamudan first met A P J Abdul Kalam in 1963 at the National Aeronautics Space Agency, Wallops Island launching facility in Virginia, United States. There was a hostel attached to the station which had a self-service cafeteria. "We lived mainly on mashed potatoes, boiled beans or peas, bread and lots of milk. Weekends were a whirl with supermarket shopping, visits to the cinema, and occasional dinners at an Indian home," noted Mr. Aravamudan in a self-account published online.

Once they came back to India in 1964, they were stationed in Trivandrum for the setting up of the Thumba Rocket Station. Both Aravamudan and Dr. Kalam would take a ten minute walk every day to go to the railway station in search of a non-Keralite South Indian meal. Thumba station had no canteen of its own and the nearby areas had very limited eating options, hence the duo was mostly depended on the railway station for most of their meals.

If one really wants to get a sense of what the former President of India loved to relish the most, head to Annalakshmi Restaurant in Anna Salai, Chennai. He was a regular at this small eatery before he began his term as the 11th President of India. According to the management, his favourite dish here was Vatha Kuzhambu and Papad. Dr. Kalam also spent close to three decades of his life in Kerala's capital, Trivandrum. He was here between the 1960's and 80's. A small, local, vegetarian restaurant called 'Guruvayoorappa' has pictures of Dr. Kalam all over. The owner claims that he used to visit the restaurant almost every day back then.

NDTV correspondent, Sneha Mary Koshi, conversed with the owner of the hotel, Mr. Parmeshwaran Nair, who recalled Dr. Kalam's staple diet at the restaurant, "He would begin his day with appam and milk and at nights he would have rasamwith some rice. I would offer to send the meal to his room but he would always mention that he has no problem in coming to the hotel and eating. He was always in a hurry."

CommentsDr. APJ Abdul Kalam was extremely soft-spoken and loving with a great vision for the country. This man of science rose from his humble background and chose to remain the same even inside the power-packed walls of the Rashtrapati Bhavan. He threw open the gates of Rashtrapati Bhavan to the junta and became 'The People's President'.

He loved children and teaching gave him immense joy and pleasure, and that was exactly what occupied him even on his last day. Dr. Kalam left behind an example that many will set out to emulate and achieve. Last year on this very day, he left behind an era of science and technology and a lot more about humanity that generations will look back at and pay gratitude to. His was a loss that remains irreplaceable for the country and for humanity at large.