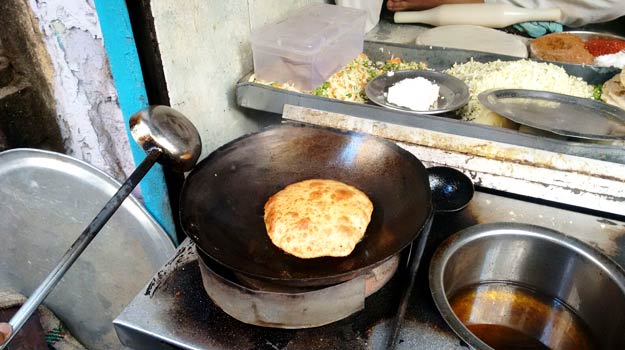 It’s hard to resist the whiff of hot oil and the aroma of sputtering spices. The air is filled with high-pitched shouts of shop owners and chaos from the busy streets. As the world goes by, I’m drawn to the sight of stuffed parathas being dipped into a large cauldron bubbling with desi ghee. They emerge deep-fried, golden and beautifully transformed. My senses scream but my lips curl into a smile, unknowingly. There’s no reason to stop for parathas at this point but it’s clearly not an opportunity to miss. I have no choice but to give in to the temptation.

This was my first time at the ‘Paranthe Wali Gali’, as the locals call it.

Tradition rules the old city’s street food. It’s not just the delicious offerings but there’s a lot more lending itself to its iconic status. The dingy lane, originally known as the Dareeba Khurd was almost barren, spotted with a few sariwallahs and silver shops when a Brahmin family from Gwalior gave it a new meaning. They started a legacy that has continued for generations. Back in the day, there were about 10 to 12 paratha shops - all owned by the same family. You could see and smell them at every corner. The Paranthe Wali Gali became the word around the neighbourhood.
“In MP, it’s traditional to serve aloo-puri and kaddu ki sabzi at most functions and weddings. When we moved to Delhi in search of work, this seemed to be a viable business. Borrowing from the concept of puris, we created stuffed parathas which were deep fried in desi ghee and served them with the same sabzis like aloo-methi, kele-sonth ki chutney and kaddu ki sabzi. We started out with four varieties – aloo, dal,besan-methi andparathwala paratha,” shares Anil Sharma who owns Pandit Gaya Prasad Shiv Charan, one of the first few shops established in 1872, being run by the sixth generation of the Sharma family.

With locally sourced ingredients and spices, these parathas are made with whole wheat flour, stuffed and then deep fried. Unlike pan-frying, deep-frying is a process that renders surface treatment. The oil turns the outsides brown and the steam produced during this process cooks the insides. This is why you’ll find that these parathas are not very greasy since they don’t absorb as much oil as they do when pan-fried. “The tawas (iron wok) that we use are deep and weigh about 10-12 kilos; they prevent the parathas from soaking in the ghee,” explains HK Sharma.

Besides the classics, you could choose from savoury ones stuffed with nimbu-pudina, mirchi, tomatoes, almonds and sweet fillings like rabri, mava or khurchan. Some of the oldest shops have been running for as long as 120 years. As time went by, the lively lane began to see a change and change is not always a good thing. Most of them put down their shutters and sold their businesses or moved into something more profitable. Today, between crumbling mansions, smoke drifts from four shops that remain, albeit losing lustre - Babu Ram Paranthe Wala, Pandit Gaya Prasad Shiv Charan, Kanaihya Lal Durga Prasad and Babu Ram Devi Dayal. Despite many challenges, they've survived thanks to the rich history they carry.

While I munch my way through a hot nimbu-mirch paratha, owner of Babu Ram Paranthe Wale, HK Sharma tells me, “Our paratha shop was set up by my grandfather. At the time, these parathas were served in pattals or dried leaves and lassi in kulhars or mud pots and people mostly sat on the floor on daris. Today, these have been replaced by disposable or plastic cutlery.”

There was also a time when these parathas were sold for 50 paise that now cost somewhere between Rs.50 to Rs.65. The Nimbu-Pudina was a gorgeous, pillowy treat bursting with flavour. He insisted I try the Papad Paratha. I couldn't resist (I didn't want to). It had a crisp exterior with a distinctive charred taste. Since these shops are owned by Brahmin families, no onion or garlic is used in their preparations. The sweet parathas were a good depart from the usual. They had a fluffy core loaded with milk-based khoya, rabri and nuts. My meal was completed with a tall glass of lassi, freshly churned.

It seemed like a quiet, deserted morning. The scene lifts up around noon but gone are the days when you would find people in queues waiting to get their hands on some piping hot parathas. Perhaps not on a sultry summer day, but during breezy winter months it turns into a hot spot. The owner of Pandit Gaya Prasad Shiv Charan proudly narrates the visit of Jawahar Lal Nehru, Indira Gandhi and Vijayalkshmi Pandit who came all the way to try their parathas. “Former Prime Minister Atal Bihari Vajpayee was also a regular visitor and even Amitabh Bacchan has been here but now the touristy rush has decreased and the business is not as good. We mostly cater to local customers in and around the market. They come here for a cheap yet wholesome meal,” he says.

I could agree, the lane has lost much of its glory. Among the new crop of gourmet restaurants that have emerged all over the city, these humble parathas fail to impress. In times when people are hungry for something new, they haven’t been able to innovate much. Moreover, for the urban calorie-conscious crowd these ghee-laden preparations are no more appealing. They still attract tourists in season that set out to explore the walled city but the place does not justify return visits. The owners confess that the rents in the area have spiked up quite a bit in the last few years, leaving them with meager profits. There’s not much that they can do in terms of expansion owing to space restrictions and limited returns. The fact that they have been able to hold on to their patrons due to their reasonable prices further crushes any opportunity for growth. But the families take pride in carrying out their business through generations.

Promoted
Listen to the latest songs, only on JioSaavn.com
"Our children don't want to take up the profession as they look for profit-driven businesses, but we've grown up in this area and like being here," says Anil Sharma.

HK Sharma was candid enough to share that they sell about 100 parathas in a day much less than what it used to be. “What can we do to rescue the Paranthe Wali Gali?” I feel nostalgic. “We’ve started catering for wedding functions and even for home parties. There are also plans to open outlets in Haridwar and Mumbai,” he smiles.

It’s disappointing when century-old restaurants succumb to the ever-changing modern palate. The future might seem bleak but Paranthe Wali Gali still holds its own and will always be reminiscent to our culinary heritage.

CommentsHow to reach: You can take the metro till Chandini Chowk Metro Station. Walk out of the station and head to the bylane on the opposite side of the road. All shops remain open from 9 am to 11 pm.