Where Do You Get The Best Khao Suey In India? Swapan Seth Finds Out 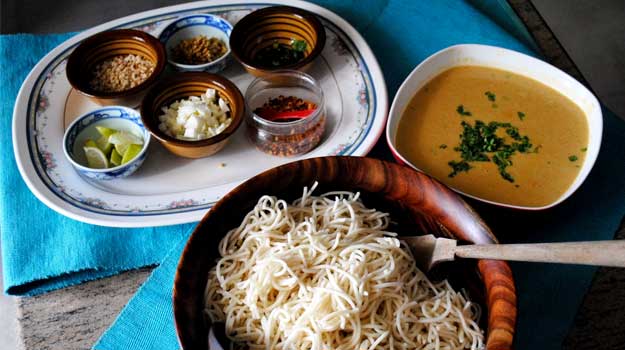 Like in all matters pertaining to food, I was inducted into the wonderful world of Khao Suey by my father. At the age of 8.

My first experience was at a four-seater eatery, which also doubled up as a hair cutting salon. It was in New Market in Calcutta. The hair cutter was also the executive chef of the establishment. This is well before consumer activism has kicked in. So even if there was the odd strand of hair in the soup, no one lost it. The gravy was light and the meat firm yet succulent. As for the dish, it was frothing at the mouth with flavour. Calcutta, at the time, was in a tight embrace with Chinese food so the place didn't catch on. The barber decided to take a haircut and the place shut. In the interim, my mother, sponge that she is, absorbed all that she saw and tasted at the shop and replicated it. It is also divine intervention that one of her firmest friends had also lived in Burma. So recipes of varying authenticity were exchanged and the Seths had fine Khao Suey on their tables ever so frequently.

But the restaurant world of Khao Suey was still dark.

That changed with My Fair Lady, once again a modest wrought-iron six seater that opened marvelously close to the venerable Loreto House: the cathedral of chiquitas. It was run by an old man. I suspect he was Parsi. He doled out magical stuff. But Khao Suey did not have the hand of God over its bowl, so that place also shut down mysteriously. And, I may add, sadly.

The world never recovered from that.

Until the emergence of Bibi Sarkar who gave this planet Taaza's. And Tazaa's made Khao Suey mainstream. At their bright and airy establishment in Gariahat, the husband-wife combination put swag into the soup. Suddenly it was the hipster's staple. Bibi's Khao Suey was beautiful. The red chili powder she served was just glorious. Taaaza's swung through the 90s. And then it got the Khao Suey curse and shut.

By then I had moved to Hong Kong. One would have imagined that things would look brighter there but no sir. Grey clouds there as well. Just one nugget called Rangoon on Causeway Bay. And what happened to that? You know what.

In spite of carving a reputation for being the dining table of Asia, there is no Khao Suey available in Singapore. Inle Myanmar in Peninsula Plaza thinks it can do a Khao Suey but actually the chefs there are hallucinating.

Amongst my favorite Khao Suey joints in the world is Mandalay, in London. Mr. Ali would chat with you over a meal. The son would serve the food and the daughter in law would make the Khao Suey. Swimmingly synchronized. There were plastic chairs. No atmosphere but the place would be packed. Understandably so.

Matters continue to be bleak in India though.

Taaza's moved to a tony neighborhood in Calcutta and started making strange things like paella and jambalaya. She lost her focus on Khao Suey. I had it once at her new restaurant and walked out with a broken heart.

Mumbai, as in most matters of food, never got Khao Suey. Busaba tried it and Nikhil Chib buggered it up. I once had a masterpiece at The Orchid Hotel near the airport. It was staggering. Besides that, Mumbai has largely been a non-starter in this domain.

There was a time when the sun would shine out of Khan Market's derrire. The Kitchen, they sighed. I had a Khao Suey there. I cried.

And then, suddenly out of nowhere, Reeka Das arrived on the scene with The Burmese Kitchen. The Khao Suey is lovely there. In fact, the loveliest in the land.

But if I had to place the crown of Khao Suey on any one head, it would be my brother, Suhel Seth's.

His home makes the most purposeful Khao Suey on this planet.

And yes, it is even better than the one at my home.

Swapan Seth eats all day, and weighs 58 kgs. The only exercise he ever does is running Equus. Ostensibly.