Eggnog is a classic christmas drink, prepared with great precision and care. it was most popular in USA. The name is still mysterious to many. The article exemplifies the procedure to prepare the perfect Eggnog. 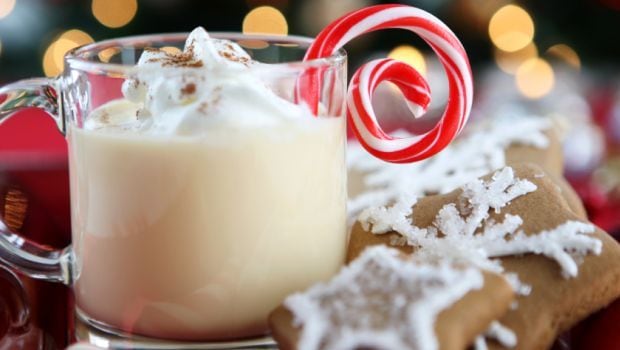 Highlights
Once upon a time when I was a very little girl, my mum used to make a bizarre drink called eggnog. Come December and out would come the milk, cream, eggs and sugar. Down they would go into the stand mixer and from it would emerge a sweet, creamy, custard-y drink that warmed the cockles of our heart. Then I grew up and realised that as simple and delicious as the classic eggnog was, pouring in a little wine, rum or bourbon added volumes to theflavour. If you scroll a bit lower down, I will give you the recipes of both the adult and the child-level eggnog. But first, a little bit about how eggnog was born.

The History of EggnogWhat really do we know about eggnog? First of all, that it is a rather old-fashioned drink, one that is extremely popular in the USA. Naturally, one assumes that it is an American potion and in fact, even the great George Washington gave the recipe to his version of the drink.

Well, it is true that the nog came to be associated with Christmas in the US, and even Mexico, Colombia, Peru and Puerto Rico adapted the drink (in Puerto Rico, they add in coconut milk). But the fact is that the original version of the eggnog was born across the pond, in the UK, around the 14th Century. It is very similar to Falstaff’s sack posset (in Shakespeare's Henry IV), a warm mixture of milk, sugar, egg yolks and strong, sweet wine that resulted in a sort of luxurious and strengthening liquid pudding. Posset was served in posh posset pots made of elaborately-carved ceramic; it was obviously a rich man's food at the time.

But where did the name come from? The 'egg' bit is obvious, but the 'nog' bit is still a bit of a mystery. It has been suggested that 'nog' harked back to a type of beer that was drunk out of a small 'noggin' or cup.

Eggnog Around the World

So many countries around the world have chopped and changed and adapted the eggnog. As mentioned above, the Americans (north and south) took it to their hearts. The French have a milky concoction called 'lait de poule' that is made with milk, vanilla extract, rum and eggs. The Germans make egg punch i.e. eierpunsch, a sweet, boozy wintry drink made with egg. Plus, the traditional Dutch 'advocaat' is a custardy, eggy alcoholic drink, much like eggnog.
How to Make Eggnog

Now we come to it, the eggnog recipe. This one uses a stand mixer (as my mum did), but you can use good old elbow grease and do it all by hand. Just remember that it will take you way longer and give you a proper arm workout.

1. If making by hand, then throw it all into a bottle and shake, shake, shake until the mixture has combined fully and is frothy and light. Drink.

This is obviously the children's version. If you want a boozy version, add in a quarter cup of rum or brandy at the end.

And yet, this is not the end of it. There are plenty of other versions that you can flavour to your taste. All you've got to do is look at it as a sort of custard base - what kind of taste would you like your custard to have? Hot chocolate? Nutella? (Yes, you can). How about mint eggnog? Or a gingery one? Why not try crumbling your favourite biscuits into it? You can even add in coconut milk and a sprinkle of toasted coconut, Iike the Puerto Ricans do. Or you could try a boozy coffee eggnog, the kind I've grown to like. All you have to do is take a frothy glass of eggnog and pour a double espresso shot into it, chased down by a coffee liquor or a shot of whisky. So, so good!

Apparently, aged eggnog is a thing. Much like fine wines, it appears that people have been aging their eggnogs for up to a year, in order to develop more mature and complex flavours. I had no idea this was a thing until I researched on this story, but apparently aging your eggnog adds depth and mellow notes to the drink. If you don't have the patience to wait for a year, you can always age your nog for a day or a week - it will really allow the flavours to meld and come together. Some recipes add in the dairy right at the end, before drinking. Some leave the mixture of both the cream and the milk for the end. It really is all about what you're comfortable with; but whichever way you choose to have it, I hope it will sweeten your life as it has previously sweetened mine.

About the Author: Meher Mirza is an independent writer and editor, with a focus on food and travel. Formerly with BBC Good Food India, she loves anime, animals and artsy things but also comics, technology and death metal.