How to Make the World's Best Prison Food at Home 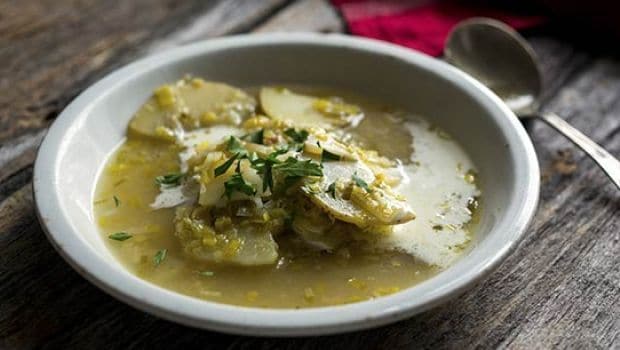 Highlights
Prisoners have more time on their hands than most of us. But that doesn’t mean they want to spend hours preparing food when a quick meal can be as delicious.

A new cookbook published today features dozens of simple recipes from Albert Roux and other chefs to raise money for The Clink, a charity that helps to rehabilitate prisoners by training them to cook and serve in restaurants inside U.K. jails.

The Clink Quick & Easy Cookbook sells for £14.99 ($18) and was launched at The Clink Brixton, where inmates served a lunch of roasted heritage beets with orange dressing; simple fish soup; coq a la biere—carved at the table with a large knife; and chocolate and triple hazelnut tart. It was washed down with water. No booze in jail.

The restaurant is smart, with tiled floors, slate walls and colorful lampshades. The waiters, attired in tartan uniforms, are attentive. They should be: Former maitre d’ Silvano Giraldin, who ruled Le Gavroche restaurant with a rod of iron for decades, helped train them.Apart from the absence of wine, there are two main differences about this restaurant. First, you must surrender your mobile phone at the door. (This rule should be applied more widely.) Second, the cutlery is plastic. Oh, and there is no tipping—another plus.

The dining room is housed in the former governor’s house, inside the prison walls.

The new book includes a recipe for eggplant parmigiana from London Mayor Sadiq Khan and a very tempting eggs poached in red wine from Roux. (Again, not for use while in prison.)

The book’s profit goes to The Clink, which helped 188 prisoners last year through various projects: four restaurants in jails; a garden to supply the restaurants; and an outside catering service. And I mean, really outside.

Within 12 months, The Clink has served meals to 70,000 diners and found employment for 61 Clink graduates. Each prisoner works and trains for 40 hours a week.

“They are doing very important work and I am happy to do what I can to help them,” said Roux, group chef ambassador to the charity, whose other chef supporters include Giorgio Locatelli of Locanda Locatelli, and Thomasina Miers of Wahaca.

So get yourself down to Brixton. Here is the current menu. You need to make a reservation and bring a driver’s license or passport for ID.

Here are two recipes from the book:

Heat the oil in a large saucepan and fry the onion until softened, six or seven minutes. Add the passata, bring to the boil, then reduce the heat to a simmer. Add the mussels, monkfish and squid rings and cook at a simmer for about 10 minutes, until the fish are cooked through and the mussels are open. Discard any mussels that haven’t opened after this time. Stir in the fish soup and heat through gently for about five minutes, while you toast the bread. Place a slice of toasted bread in the bottom of each of four warmed bowls (or just serve it alongside), pour in the soup and serve.

4 round pieces of coarse white bread

1 tbsp groundnut oil, plus more for the lardons

Listen to the latest songs, only on JioSaavn.com
2 tbsp chopped parsley leaves

Bring the wine to the boil in a sauté pan. Crack each egg into a cup and carefully drop it into the wine. Poach the eggs, then carefully lift them out with a slotted spoon and drain on kitchen paper. Trim off the straggly edges, cover with a damp cloth and keep at room temperature. Strain the wine through a sieve. In a saucepan, heat 30g of the butter, stir in the flour and cook gently for two minutes. Take the pan off the heat and gradually add the wine in which you poached the eggs, whisking all the time. Still whisking, return the pan to a low heat and bring to the boil. Add the bouquet garni and crushed peppercorns and simmer for 30 minutes. Take the pan off the heat and pass the sauce through a sieve, then gradually whisk in the remaining 30g of butter. Season to taste and keep warm. To clarify butter, heat it gently in a small saucepan. When the foaming stops, skim off any foam and pour it slowly into a dish, stopping before the milky solids at the bottom (throw these away). Heat it in a frying pan and fry the bread until golden on both sides. Place on a wire rack. Meanwhile, heat the oil in a frying pan, then add the onions with the pinch of sugar and some salt. Fry until caramelized. Add a little water, cover and cook gently for 15 minutes until glazed. Separately sauté the lardons with a little more oil until golden, then drain the excess fat. Place two eggs on each crouton and set in the center of each plate. Heat up the sauce, adding the baby onions and lardons, and pour it generously over the top and around, sprinkle with parsley and serve.