In Praise of White Pepper 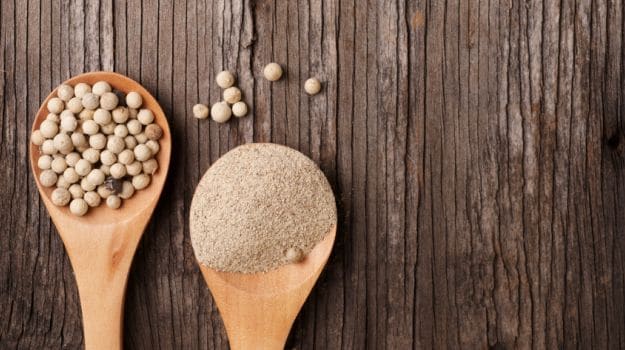 Of all the spices, pepper is most generously used and yet most misunderstood. A pinch of pepper is added to almost every kind of dish but it is rarely celebrated. It definitely needs more appreciation than being salt's partner. This humble spice can actually elevate the taste of other ingredients, add gentle warmth and make a simple recipe more interesting. That's what I think makes it special.

Peppercorns can be green, white, black and even pink, depending on when they are harvested. White peppercorns come from the same plant as their black cousin (pardon me). The berries are allowed to ripen fully on the vine, then soaked and fermented for up to two weeks to remove the outer skin. It is the whitish-grey inner seed of the berry. Black peppers, on the hand, are berries picked right before they mature and then dried which turns them dark.

So, you wonder if these creamy peppercorns deserve their own pepper mill. Why not? The flavour is a bit muted yet more complex than black pepper. It contains less piperine, the volatile oil that gives black pepper its characteristic taste. While some feel that the flavour is whiney and reserve it only for aesthetic use in sauces and stews to keep the look and avoid black specs from floating about, I'd happily sprinkle it for the distinct earthiness it adds. This is probably why it found a place in French and Continental fare, comprising light coloured sauces and casseroles.

Food Writer Priyadarshini Nandy agrees, "What's quite interesting is that while the pepper has a sharper bite than the black, the basic essence of its taste is very earthy. In food, white, instead of black, pepper is often used in white sauces to prevent the appearance of black specks. Then again, famous chefs such as Jacques Pepin didn't favour the white pepper at all!"

There are definitely times when one should be used over the other. It's easy to choose. If you're looking to add some attitude to your dish, white pepper is just what you need to highlight the rustic flavours. In dishes that only require a base note of heat, use black pepper. The basic difference between the two is that white pepper is more earthy when it comes to flavour. It goes naturally well with some cuisines like South Indian,Mexican, Chinese and Asian that make use of a lot of spices not just to impart hotness but to give their dishes character.

Chef Ranveer Brar who likes to experiment with his ingredients shares, "White pepper can be used in many creative ways. Safed Mirch ka Chicken Tikka has become a top favourite lately. I'd even use it in desserts and some combinations like white chocolate and white pepper creme brulee, white pepper Parmesan and white pepper pudding have really worked well."

"The scent is not as pungent as black pepper. It can be used in dishes such as curries or soups which are absolutely white and thus can be merged well. But, I would recommend its use in dishes which already have complex flavors and layers as using it in a bland dish will give an odor which is not very likeable," adds Food Blogger Reshmy Kurien.

The odour that some might find unpleasant probably develops during the fermentation process when peppercorns are left in water for too long. The distinctive flavour of white pepper has generated mixed emotions, so one can say that it's an acquired taste. As with most cooking, less is more. Don't get carried away, it can totally ruin your dish. With white pepper, a little goes a long way.

Taste aside, white pepper does come with health benefits. It contains casaicin, which generates heat, and therefore helps to alleviate headaches,cures coughs and aids digestion.

At home, prefer whole peppercorns as they tend to lose their potency on grinding. And that's a good enough reason to get your own pepper mill. For best flavour, crush them fresh. This way the flavour lasts longer. Also, white pepper turns stale and bitter faster than the black variety. Be sure to store it appropriately. Personally, I love a sprinkling of white pepper in soups. The lingering spiciness adds a new dimension to the otherwise bland broth.

Anyone else who's a fan of white pepper? How do you like to use it?