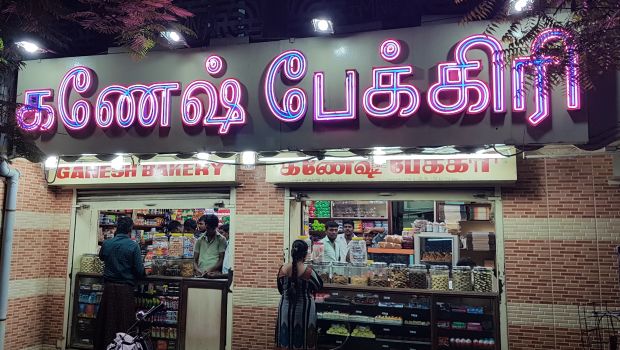 I’d heard quite a few tales about Ganesh Bakery and I was a slightly disappointed with my first impression. This was literally my first stop in Tuticorin (also known as Thootukudi) in Southern Tamil Nadu - home to one of India’s busiest ports, and believed to be one of the world’s oldest seaports. Tuticorin’s pearl fishing industry is legendary and the region produces some of India’s finest salt. You can spot salt pans around the city but my biggest motivation to visit Tuticorin was the city’s popular macaroon.

The Tuticorin macaroon was the first macaroon I ever sampled, much before true-blue French macaroons that are now a popular fixture at luxury hotels and upscale bakeries across India. School mates of mine from Southern Tamil Nadu would bring these cone or hat shaped macaroons from their trips. I used to be enamoured by the shape that almost resembled a mini ice-cream cone but it was the texture that was the big draw. It was like nothing I’d tried before – crunchy as you bite into them before they melt in mouth. Years later I found these Macaroons at a supermarket in Chennai but didn't quite taste the same as the Tuticorin Macaroons from my childhood. Either my taste buds had been influenced by all the French Macaroons over the years or maybe these were not the best macaroons from Tuticorin.Most of my enquiries about the finest Tuticorin Macaroons pointed towards Ganesh Bakery, not surprisingly I checked into this local institution even before I checked into my hotel in Tuticorin. I was expecting to find a large bakery with teeming crowds but Ganesh Bakery could pass off for any neighbourhood bakery in Tamil Nadu. Just two counters where shop assistants keep handing bakery goodies to customers over the counter. I was worried when I didn't find Macaroons on display and even more puzzled when I received a 250-gm gift-wrapped box (for just Rs 220) when I asked for Macaroons.

I asked the Manager – Jebastin, if this was a marketing ploy to hide the bakery’s most popular item and arouse customer curiosity; he laughed it off. Another restaurateur in Tuticorin whom I spoke to attributes it to the short shelf life of the Tuticorin Macaroon. It turns soft in quick time unless it’s stored in an airtight container. It’s why most bakeries don’t store them in large cookie jars that are constantly opened and shut through the day.

There are quite a few theories in Tuticorin about the origin of the macaroon. Some attribute it to the Colonial connection – Tuticorin was a Portuguese settlement before the Dutch and eventually the British occupied it in the 18th Century. The city has a long heritage of baking; there are probably more bakeries than traditional sweet shops in the city and almost each of these bakeries sells macaroons. It’s one of these bakers who is believed to have learnt the recipe for Macaroons in an apprenticeship with Spencer’s in erstwhile Madras and introduced it to Tuticorin.

The Tuticorin macaroon is crafted with just three ingredients – egg white, sugar and cashew nuts. The cashew is the what sets it apart from the classical French macaroon that uses almond (or almond sugar). The Tuticorin macaroon uses no food colouring and has its own trademark - though not protected by a GI (Geographical Indication) tag, shape. Many bakeries still use wood-fired ovens to bake macaroons. The team at Ganesh bakery like to keep a low profile but told me there’s no secret ingredient; the trick is the manufacturing process. It’s why almost every bakery’s macaroon has a slightly different flavour profile. Some tend to be crunchier because of the excess cashew nut, some tend to be a tad ‘eggy’ that can be a turn off and many bakeries tend to veer towards a sweet version.

While some bakers ship the macaroons out of Tuticorin, Ganesh Bakery’s macaroons are only available at one counter. These macaroons could crumble in transit or turn soft if they are not stored right. Most locals agree that Tuticorin macaroons don’t quite taste the same outside Tuticorin. It only adds to the allure of this unique contribution to Tamil Nadu’s rich food scape – a brilliant blend of a western baking technique with cashew. It’s not even fair to compare these macaroons with the quintessential French Macaroon, the Tuticorin Macaroon is in a league of its own and you can have any colour you want as long as it’s white.

Listen to the latest songs, only on JioSaavn.com
Disclaimer: