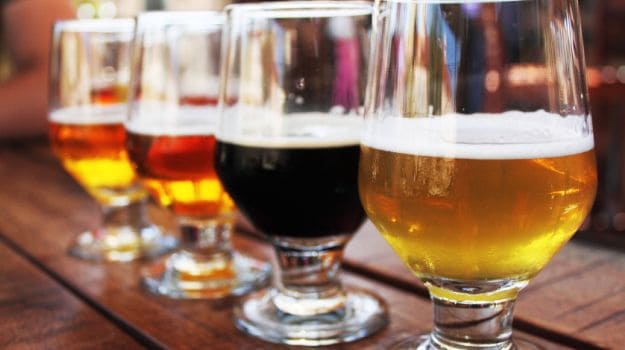 Here are 5 amazing benefits of beer. (No, seriously!)

Promoted
Listen to the latest songs, only on JioSaavn.com
Beer has been many things to us - fuel for a blurry weekend, a drink that brought out your best dance moves and quite often, the pint that forged friendships. But it turns out there are more reasons to love a good brew. Not like you need convincing. A crowd-pleaser for all tastes and seasons, beer flows endlessly in most bars. Yet, it’s rarely appreciated. So often dismissed for having high calories, beer is a formidable competitor for hard liquor with healthy advantages. This news you’ll definitely want to share when you hit happy hours tonight. Raise a chilled mug, toast to your health and consider this round on us.

1. Keeps your heart happy
A 2015 study conducted by the Harvard School of Public Health discovered that women who drank beer once or twice a week had a 30 percent lower risk of heart attack than those who drank more than that or nothing at all. A glass of beer every now and then is fine – just don’t overdo it.

2. A dose of vitamins
Hops are one of the basic ingredients in beer brewing and they are rich in Vitamin B6. These vitamins are known to prevent the build-up of a harmful chemical in the body called homocysteine which may cause heart disease. Beer also contains super-nutrients like vitamin B12, folic acid and calcium. Another bonus.

3. It has fiber
Wine has none. Cue evil smile. Beer contains soluble fiber in the form of beta-glucans which is known to lower bad cholesterol levels. The calories in beer come from sugars and starch which are sources of carbohydrates that provide short-term energy to your body. In comparison to a can of soft drink, beer is actually low in sugar.  It is also about 93% water which makes it very hydrating.

4. Stressed? Beat it down with beer
I’ll drink to that. Beer contains lactoflavin and nicotinic acid that are known to promote zzzs. You shouldn’t be surprised to hear that moderation applies. A new trend that’s catching up in the West is the beer bath. The ingredients that make up beer – barley, yeast and hops - have many health benefits. Many spas in Europe and America offer an experience to bathe in beer that can help you detox and also fight insomnia and anxiety.

5. Beer for beauty
Beer is made with barley which is rich in ferulic acid - a potent antioxidant. This compound is also present in tomatoes and corn but a 2000 study conducted at Guy’s Hospital in London indicates that it is more easily absorbed by the body from beer. Moreover, studies have shown that darker beers offer a stronger antioxidant punch.

CommentsIt’s not just drinking beer that helps. What’s Hollywood actress Catherine Zeta-Jones’ secret to those long and lovely locks? She uses beer as a conditioner. The hops in beer contain silica, a mineral that is known to increase volume, strengthen follicles and add lustre. Leave a can of beer till it turns flat and pour it over your hair after shampooing. If you find it makes your hair overly dry, make a mask by mixing it with either an egg or two teaspoons of apple cider vinegar or one teaspoon of coconut oil. Keep it on for 20-25 minutes and rinse for smooth hair.