7 Amazing Restaurants To Try When You Visit Pondicherry

Over the last decade, Pondicherry's French quarter (what the French once called White town) with its charming colonial era heritage buildings has become a popular destination for tourists and solo travellers from across India. Dining experiences are an integral part of Pondicherry's appeal. 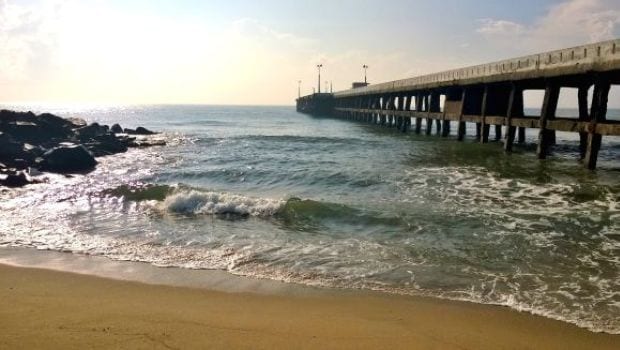 Highlights
It was the East Coast road that finally connected Chennai and Pondicherry along the Bay of Bengal, in the early 2000s that was probably the catalyst for Pondicherry's dining scene. It didn't just bring Chennai closer to Pondicherry, but gradually many Chennaites started driving to the erstwhile French bastion for a day or sometimes just for lunch. Rendezvous was one of the first cult restaurants that emerged and then there were restaurants like Satsanga that were frequented by expats and International visitors. Over the last decade, Pondicherry's French quarter (what the French once called White town) with its charming colonial era heritage buildings has become a popular destination for tourists and solo travellers from across India. Dining experiences are an integral part of Pondicherry's appeal. We pick some quintessential Pondicherry experiences for your next visit.

The name is a giveaway. Pondicherry's hottest new dining destination is housed in a century old French villa - Le Maison Rose, which takes its name from its pale pink exteriors. It's conceptualised by the same team that established Amethyst, that set the template for Chennai's cafes. The interiors include interesting elements like Athangudi Tiles and furniture from Jodhpur. The menu is European with an Indian twist. The emphasis is on local ingredients; all their desserts are crafted in-house.(Also Read: The Foodie Extravagance: 10 Restaurants in Pondicherry You Must Visit )

Among one of many French colonial villas that have morphed into intimate boutique hotels. It's the hotel's restaurant that has become its calling card. Quite a few Pondicherry restaurants claim to serve Continental/French cuisine; Villa Shanti doesn't try too hard to fit into any box, focusing instead on delivering consistent food quality. One of my 'go to' dishes here is the prawn and pomelo salad, which cleverly substitutes glass noodles with the pomelo and their flourless orange, and almond cake served with chocolate mousse is one of Pondicherry's best desserts.

Spread over 35 acres with its own casuarina-fringed private beach, Dune comprises uniquely designed bungalows where traditional architecture, modern design and kitsch converge. F.U.N, the resort's signature restaurant with a casual vibe, is one of the only pet-friendly dining spaces in Pondicherry. The menu tries to find a balance between healthy and scrumptious meals - it is a big champion of organic food. Their popular millet biryani is evidence.

Most tourists hardly leave the French Quarter. CGH Earth's charming hotel is one good reason you must. This was once a sprawling Chettiar mansion (it's over 130 years old) and is in the former Tamil Quarter. It's also one of the only fine dining experiences where local Tamil cuisine comes to the fore. The dining experience (for in-house guests) can also include a visit to the busy Goubert market along with one of their Chefs. Some of the 'must try' dishes include their curry leaf coated fish and pepper mushrooms.

It's a popular breakfast venue but an even more popular pit-stop for visitors looking to take home some of Auroville's baked goodies. This bakery in the heart of Auroville leads to a cosy caf&#233; where you can sample some of Pondicherry's best croissants and omelettes for breakfast. Their breads are terrific, while most regulars recommend their cinnamon rolls and walnut brownies.

Listen to the latest songs, only on JioSaavn.com
This 18th century heritage building was originally constructed to serve as the residence of the Mayor of Pondicherry. It was transformed into a boutique hotel with the central courtyard serving as a dining space. The menu is exhaustive and includes everything from pasta to Indian cuisine. There's also a selection of what the restaurant calls 'Pondicherry Fusion cuisine' that includes some interesting dishes like a rasam with coconut milk and shrimps and anchovies tossed with Indian spices and served with aioli.

(Also Read: 8 Best Restaurants in Chennai You Must Visit )

CommentsIf you're looking for a break from Pondicherry's cafes and it's version of Continental cuisine, make a quick stop at Surguru. It's a great option for breakfast or an evening snack (along with an invigorating cup of filter coffee), where South Indian staples like their crispy dosas and sambar vada hold sway. There's more than one Surguru in Pondicherry, but if you're staying in the French Quarter, the compact Surguru Spot on Jawaharlal Nehru Street is the closest.


About Ashwin RajagopalanI've discovered cultures, destinations and felt at home in some of the world's most remote corners because of the various meals I've tried that have been prepared with passion. Sometimes they are traditional recipes and at most times they've been audacious reinterpretations by creative chefs. I might not cook often but when I do, I imagine I'm in a cookery show set - matching measuring bowls, et all!