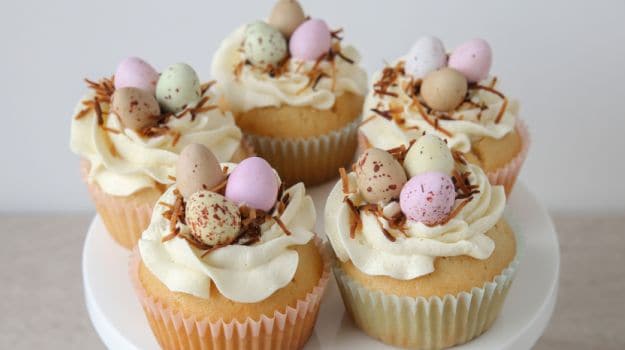 Every Easter, after the penitence of Lent, a parade of Easter sweeties line up in my kitchen (and my tummy). To mark Good Friday, we always have a plateful of hot cross buns, a sweet, fluffy bun that has been lightly spiced and studded with currants, raisins or candied fruit. The bun is marked with a large cross, an obvious symbol of Jesus Christ. I am no Christian, but somehow, those hot cross buns always find their way into my house every year perhaps because as a little girl, I was taken with the olde English nursery rhyme 'Hot Cross Buns', you know, the one where the bun vendor hawks her wares "If you have no daughters, give them to your sons / One ha'penny, two ha'penny, hot cross buns."

The wee bun and its twee rhyme belies its mighty origins though. Here from the Oxford Companion to Food by Alan Davidson, "In England, hot cross buns are traditionally eaten on Good Friday; they are marked on top with a cross, wither cut in the dough or composed of strips of pastry. The mark is of ancient origin, connected with religious offerings of bread, which replaced earlier, less civilized offerings of blood. The Egyptians offered small round cakes, marked with a representation of the horns of an ox, to the goddess of the moon.

The Greeks and Romans had similar practices and the Saxons ate buns marked with a cross in honour of the goddess of light, Eostre, whose name was transferred to Easter. According to superstition, hot cross buns and loaves baked on Good Friday never went mouldy, and were sometimes kept as charms from one year to the next. Like Chelsea buns, hot cross buns were sold in great quantities by the Chelsea Bun House; in the 18th century large numbers of people flocked to Chelsea during the Easter period expressly to visit this establishment."

In countries such as Russia and Bulgaria, a similar sweet bread is cooked to celebrate Easter - this is the famous kulich cake, a tall, cylindrical shape crowned with icing on which the writing 'Christ has risen' is scrawled on it. In some families, the takes the place of bread for the entire Holy Week. I have never tasted kurich but I have eaten plenty of simnel cake, that my London friend used to bake around Easter. It is remarkably similar to a Christmas fruit cake but is crowned with eleven marzipan spheres, which signify Christ's eleven loyal apostles.

More of my London days - in the weeks leading up to Easter, the aisles of Tesco and Sainsbury and really every grocery ever, transformed into a technicolour explosion of Easter eggs. Naturally, the more famous among these are the Cadbury Creme egg (with its sugary fondant centre) and the Kinder chocolate egg (with a tiny toy stuffed within). Easter would be unthinkable without them! But there is nowadays an explosion of posh eggs; think truffle eggs wrapped in gold foil and sea salt and caramel flavours.

Much as with the hot cross buns, the symbolism is clear. Eggs are a symbol of renewal, of spring and rebirth and bounty. On the website www.newadvent.org, I read that, "Because the use of eggs was forbidden during Lent, they were brought to the table on Easter Day, coloured red to symbolise the Easter joy. This custom is found not only in the Latin but also in the Oriental Churches. The symbolic meaning of a new creation of mankind by Jesus risen from the dead was probably an invention of later times.

The custom may have its origin in paganism, for a great many pagan customs, celebrating the return of spring, gravitated to Easter. The egg is the emblem of the germinating life of early spring. Both coloured and uncoloured eggs are used in some parts of the United States for this game, known as "egg-picking". Another practice is the "egg-rolling" by children on Easter Monday on the lawn of the White House in Washington." The Easter bunny is supposed to have birthed the eggs, the bunny being another pagan symbol of fertility that has been appropriated by Christians.

If you've been paying attention, you may notice a common thread running through this piece so far. All the Easter goodies are sweet! It was only in the 19th C that Easter eggs and other candy became popular but it was in the 20th, when it all really exploded. Samira Kawash, author of Candy: A Century of Panic and Pleasure, writes about candy in American culture. "By the late 1800s, fine candy makers in major U.S. cities were offering chocolate eggs both hollow and filled, jelly eggs, and exquisite panorama eggs of sugar, icing, and paper for the Easter holiday.

But it was only in the early 20th century when innovations in candy-making allowed manufacturers to produce novelty Easter candies on a massive scale—rabbits in every pose, chickens roosting and strutting, nests and eggs of every description—that they became Easter basket staples. By the 1920s, the demand for special Easter candies was so great that factories were reported to spend all their time from the beginning of the year until Easter stocking up to meet the demand."

Let us end on a savoury note. While hot cross buns and Easter eggs are ubiquitous across Indian Christian communities, we do have our own homegrown traditions. For instead, on Easter, East Indians prepare fugias (golden-fried dough) which is eaten with sorpotel or duck moilee. Lamb is traditionally prepared for an Easter meal as well and pork sorpotel, xacuti and sannas often grace the Goan table. In Kerala, appams and chicken curry are prepared for Easter breakfast, after which the whole family goes to church to give thanks to God for his blessings.