Identifying Food Allergy: Know the Triggers and How to Prevent a Reaction 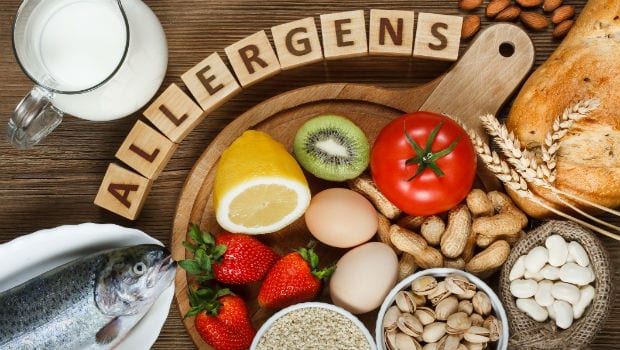 There are various triggers for food allergies

Highlights
Imagine a scenario where you go to a restaurant, choose a dish for yourself, order it and eat it, only to find that your tongue swells up and you are not able to breathe? Sounds scary, right? That's exactly how people suffering from severe food allergies feel. A food allergy is basically an abnormal response to the consumption of specific food items or a constituent of food. It is triggered by the immune system, which may give out signs and symptoms ranging from mild to severe. Some of the common symptoms for a mild food allergy may include having an itchy mouth or ear canal, nausea, vomiting, diarrhoea or stomach pain.

Food allergies tend to flare up within several minutes to many hours. When the symptoms are severe, it is critical to identify the allergy and treat it immediately. Some of the extreme signs of food allergies include problems in swallowing, shortness of breath, weak pulse, drop in blood pressure, chest pain, lost in consciousness, obstructive swelling of the lips, tongue or throat, and even turning blue.

When the symptoms tend to get extremely serious, as described above, it be a sign of anaphylaxis and requires immediate medical attention. Food allergies should never be taken lightly as they may, in extreme cases, prove to be fatal.

(Also Read: Food Allergy: How Much is Too Much?)

Some of the common symptoms for a mild food allergy may include stomach pain and nausea; Image credit: Istock

According to the book Diet and Nutrition: A Holistic Approach by Rudolph Ballantine, "Even pinning down which foods are the culprits is not so easy. Immediate reactions can be picked up by the sublingual tests, but the delayed reactions which are thought to occur days later are very difficult to identify. One may be mistaking a delayed reaction to a food taken yesterday for an immediate reaction to something just eaten."

Food allergy is also often confused with food poisoning and food intolerance. There is a fine line of difference between all three. The immune system, which is held responsible for food allergies, cannot trigger food intolerance. For example, lactose intolerants are not able to break down milk products due to the absence of the enzyme Lactase in the digestive system. So, the resultant problems are mild and not immediate. In the case of a milk allergy, however, the symptoms escalate very quickly and can soon become life threatening.

According to Dr. Shubnum Singh, Senior Consultant- Allergy Clinic, Max Super Speciality Hospital, Saket, "A food allergy is defined as an adverse health effect arising from a specific immune response that occurs reproducibly on exposure to a given food. The main target organs can be airways, skin, digestive tract or even cardiovascular organs"

Food intolerance does not make you completely averse to the food in question as you still may be able to consume small amounts of it. Certain medications can also help reducing the effects of the food. What's more, food intolerance can actually be reversed over a certain period of time, which is not the case for food poisoning. Food poisoning is completely different from these two, as it is a result of consuming undercooked or contaminated food.

(Also Read: How to Cut the Risk of Food Poisoning in the Kitchen)

Pinning down which foods are the culprits for allergy is not so easy; Image credit: Istock

Allergies occur when Immunoglobulin E (IgE), a kind of antibody, is produced in heavy quantities in response to a trigger by an allergen. A protein in the reactant food is usually what triggers this reaction by the immune system.

Common allergies vary according to the country's dietary patterns and culinary history. Food allergies differ for various individuals according to the person's medical history, Vitamin D deficiency, other allergies he or she may have, whether he or she suffers from Asthma, or even simply, old age.

The following are the common food allergies around the world-

1. Corn, which is found in foods such as cereals, candies, jams, syrups and sauces often use corn extracts as well. So be careful while purchasing them. Unfortunately, corn starch is used in a number of non-food products as well, which include shampoo, toothpaste, cosmetics, crayons, dishwashing liquid, clothing, paint, plastics and pet food.

2. Egg, for which the best thing to do is to avoid eating eggs and egg products entirely. Egg allergic patients thus need to constantly check the labels of packaged foods for traces of eggs. Egg protein may also be contained in vaccines, which may also be a prospective trigger.

3. Fish, which may vary from person to person. Some are allergic to finned fish such as tuna, halibut or salmon whereas others are allergic to shellfish and seafood. Dieticians usually recommend that all kinds of fish should be avoided. Fish is also a common ingredient in several salads and sauces.

4. Milk, which is triggered by consuming dairy products such as milk, cheese and yogurt. All these milk-related products should be avoided entirely, lest severe symptoms come up.

5. Peanut, is a common ingredient in many candies, baked goods, cookies and cereals. Peanut butter is also an ingredient in various sauces and marinades, and even a topping on ice cream. Foods may also be contaminated by peanut in the manufacturing process, so it's important to heed the warning on the package.

7. Wheat, is found most abundantly in our daily foods, and hence is the most difficult to avoid. It is found in pasta, wheat crackers, breads, muffins, cakes and various sauces and ice creams as well. Patients should try and substitute wheat flour with alternatives such as rice, corn, sorghum, soy, tapioca or potato flour. Gluten-free products should be preferred by the wheat-allergic individuals.

A strict diet needs to be followed at all times, in order to prevent an allergic outburst. Avoidance of the problematic food must be observed, including touching or inhaling. Also carry the medicine or the antidote for the allergic reaction. One must know the signs and symptoms of an allergic reaction, and know how to treat it properly. Immediate medical attention may be required in case of extreme situations. While eating processed and packaged foods, observe the label with extra care. Tell the staff of the restaurant you're dining in about your allergy.

Dr. Singh further explains, "Food Allergies should be treated by elimination and or rotation of specific allergic foods. In the event of an anaphylactic reaction, hospitalisation or immediate resuscitation may be necessary."

According to the book Diet and Nutrition: A Holistic Approach, there is a paradox in the treatment of allergies. Ballentine elaborates "There is some evidence that the adverse effects of foods that to which one is sensitive can be dulled to some extent when one eats more and more of the same thing." Maybe this approach may work for some patients, but be careful to consult a qualified dietician before actually trying it out yourself.

A strict diet needs to be followed at all times, in order to prevent an allergic outburst; Image credit: Istock

What to Look out for While Buying Food Products

Various countries combat the risk of food allergic reactions for the benefit of their citizens. They make the printing of ingredients and prospective allergens contained in packaged foods a mandatory legal requirement. In the European Union as well as the USA, there are legislations that make it compulsory for manufacturers to inform and clearly label in case their products contain traces of major allergens. Eight food ingredients cause a majority of the food allergies in the USA and fourteen ingredients are considered high risk ingredients in the European Union. Rice allergy is uncommon in both the regions, but many such cases are found in Japan.

Indians, too, are at a risk of developing food allergens to products like wheat, nuts and dairy. A research led by Professor Mahesh PA, Director at Allergy Asthma Associates in Mysore, India, has uncovered many others - with brinjal (aubergine), cucumber, lady's finger (okra) and papaya among the most common foods causing clinical symptoms in population samples from Mysore City and Bangalore.

The problem with the Indian food allergy scenario is that of underreporting. Digestive infections are often treated like any other regular malady. Though the Food Safety Standards Act, 2006 is enshrined in the Indian Constitution, there are hardly any mandatory regulation formulated for allergic products. There is a need to generate awareness in the country regarding the symptoms, causes and treatment of such allergic reactions. The solution is not to shy away from discussing the problem, but to tackle it head on.