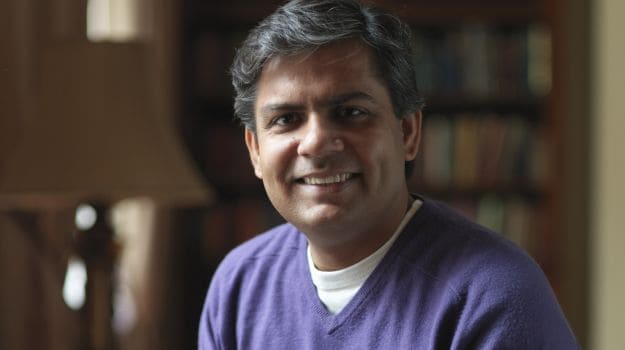 Among the forerunners to have revolutionised Indian Food, giving it a modern spin to cater to global palates, Chef Vivek Singh has come a long way from his hometown Asansol in West Bengal to being the creative force behind London’s popular restaurants - The Cinnamon Club, Cinnamon Kitchen and Cinnamon Soho. Chef Singh’s ability to spin magic to Indian food is what makes dining at his restaurants a memorable experience. His food is rooted in Indian traditions yet transformed to something spectacular with the finesse of modern culinary techniques and presentation, and is always evolving, keeping pace with the times we live in. Probably this is the reason why his creations have managed to strike the right chords with his diners and inspire food enthusiasts across the globe.

He is in Bangalore currently where he is hosting a pop-up at Riwaz, the fine dining Indian restaurant at The Ritz-Carlton, showcasing some of his signature dishes – Rogan Josh Shepherd’s Pie, Clove Smoked Lamb with Rajasthani Corn sauce, Carrot Halwa Spring Rolls, and Lassi Pannacotta among others. We catch up with him for a tete-a-tete -

Indian diners have taken a huge liking to Modern Indian food in the recent times. A number of such restaurants have mushroomed across India, offering some really interesting food.  The same could be said across the globe too. Would you say there’s a Modern Indian Food revolution happening?
I agree, the time for modern Indian food has arrived. Much like any other art form be it music, theatre or films, food too needs to evolve in order to reflect the changing lifestyle, aspirations and attitudes of the people and I believe modern Indian food today shows to the world that there is so much more to it than merely poor ingredients curried to death in bowls of brown sauce. It showcases the vibrancy, the punch, the kick and depth of Indian food, much like the Indian person of today who is confident, comfortable in their own skin and at ease in the global world.

How did the Cinnamon story start and what made you do so?
The Cinnamon Club was born out of a labour of love and ambition. Its driving force was the desire to change people’s perception of Indian cuisine in the UK. Today, it is known as London’s original modern Indian restaurant.

Tell us a little more about your three restaurants. How different/ similar are they from each other?
Our flagship restaurant is The Cinnamon Club, located in the heart of Westminster. Since first opening its doors in 2001, The Cinnamon Club has been redefining the expectations of Indian cooking; serving innovative and creative Indian cuisine in a contemporary fine dining setting.

Cinnamon Kitchen, our second restaurant in the City of London is high-energy, introduces theatrical dining with its open tandoor grill and offers people an interactive dining experience.

What’s in your mind when you have your Chef’s hat on?
It's usually about what new I can do with a familiar ingredient or which new ingredient can I introduce into my armoury. The play is constantly on!

That one dish you are extremely proud of creating?
Carpaccio of home-cured Shetland Salmon with Caramel Jhal Muri. This is the perfect example of combining influences from East and West, old and new, connecting different worlds and putting things together in a new context. Salmon and mustard isn’t a very British combination but is frequently seen in Nordic cultures. Fish and mustard is a typical Bengali combination of choice. Jhal Muri is a street snack sold in Bengal using puffed rice. Salmon ans wasabi is a frequently spotted combination in Japanese restaurants all over the world. This is a truly global combination and our take on the classic.

Why do a pop-up at The Ritz? Are you testing the waters before starting a restaurant in India?
Anupam Banerjee, Executive Chef at The Ritz-Carlton, is a dear friend of mine from much before my days of 'fame'. Jest aside, I have always been intrigued with the Bangalore dining scene and when The Ritz-Carlton approached me, I knew that it would be a good tie-up because of our shared values of quality, excellence and warm hospitality.

How have you planned the menu for the pop-up? What did you want to showcase to the people here?
2016 sees The Cinnamon Club celebrate its 15th anniversary. At The Ritz-Carlton, I wanted to pay homage to this, by serving up some of the famed dishes from The Cinnamon Club over the years. We are also giving guests an opportunity to get a taster of the Cinnamon Collection, by hosting special themed lunches – Cinnamon Kitchen lunch, Cinnamon Soho lunch and Spice at Home lunch; featuring dishes from my most recent cookbook.

What’s the most popular dish at The Cinnamon Club?
One of the current favourites is the Raan; slow braised shoulder of milk-fed Herdwick lamb from the Lake District. A real celebratory dish, carved and served table-side with a rich saffron sauce, 24-hour cooked black lentils, pomegranate pilau rice, burhani raita and coriander chutney.

Tell us about your popular/controversial creation – The Bollywood Burner. What’s the dish and how did you prepare it?
We were aiming to break the Guinness World Record for the hottest dish. Using the Naga pepper and its seeds, which is over 100 times hotter than a jalapeno pepper, I created a lamb-based curry for daring diners. It’s a pretty controversial one, whereby guests are required to sign a disclaimer saying they are aware of the nature and risks involved with tasting the curry before eating it. Bizarre as it was, somehow, it caught the imagination of people all over the world and the story went viral! We had people coming to us from all corners of the world requesting for the dish. It surely has been the most successful dish that has never been on the menu.

Food to you is…
An experience to be enjoyed, no matter what the occasion is. It’s also an expression of friendship, love and warmth.

3 ingredients that you cannot do without
Chillies, turmeric and salt.

The one dish you love to dig into when no one’s watching you?
Spicy omelette in a tea cake; a favourite at home and quick and easy to prepare.

A celebrity you are extremely proud of serving a meal to?
Sachin Tendulkar of course!

3 Indian ingredients which you think are most underrated?
Sangri beans; long ago I came across it and initially didn’t get the point of it, but after having tried it a few times, I grew fond of it and it has been on our menu at The Cinnamon Club since day one, 14 years ago.

Jackfruit; its fleshy texture is very close to that of meat. This versatile veggie is presented in three forms at the restaurant; Tandoori Tikka, Griddled Kebab and a meat-style curry based on the flavours of a robust Bengali meat curry Kosha Mangsho.

Bottle gourd, generally underrated, however has many health benefits. When served as a stir fry with seafood it tastes delicious.

Promoted
Listen to the latest songs, only on JioSaavn.com
Let’s say we brought you seasonal produce – root veggies like beets, turnips or black carrot, how would you prepare it?
I would prepare a Cinnamon Soho favourite; Rogan Josh Shepherd’s Pie. This dish incorporates some great seasonal vegetables such as turnips, black carrots and celeriac to make a hearty, winter-warming dish that fuses Indian techniques and flavours with a British classic.

What’s next in your plan?
We are gearing up for a busy and exciting festive season, with plenty of feasting and celebrating at Cinnamon. In 2016 we are excited to be celebrating 15 years at The Cinnamon Club.

CommentsYour food philosophy?
Evolving. Modern. Indian. Presenting age-old tradition and recipes through the prism of fresh, new eyes. Combining classic techniques and ingredients with the best local seasonal produce one can find, in whichever part of the world it may be.