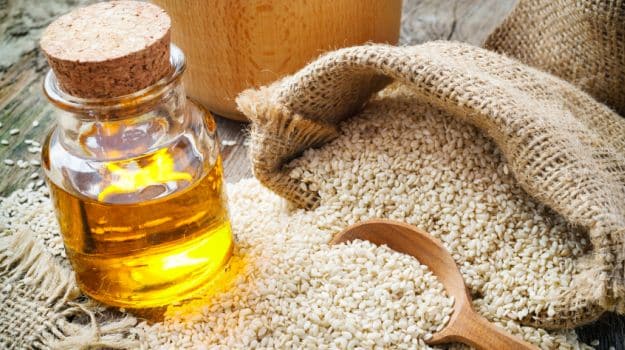 In most Indian households, you will often find a bottle of sesame oil stored in a corner of the kitchen shelf. We have a certain fondness for it, and use it lovingly while preparing our precious pickles or special subzis. It is a flavour booster and the distinct nutty taste blends in well with the various mixes of spices that are synonymous with Indian cooking. It is said that sesame oil was first extracted during the Indus Valley Civilization and thereon was introduced to other parts of Asia and the world. Today, it is deemed as one of the healthiest oils, loaded with essential nutrients.

Compared to other cooking oils available in the Indian market, sesame oil somehow lags behind in popularity. We mostly use it for specific recipes and not as an everyday option. Perhaps this is to do with its relatively low smoke point as opposed to the use of high heat while preparing Indian dishes. Sesame oil is available in two different varieties – light sesame oil which is extracted from ripened sesame seeds, has a pretty amber colour and can be used for deep-frying; and dark sesame oil which is extracted from roasted sesame seeds, is brownish in colour and can be used for stir-frying and pickle making.In Ayurveda, sesame oil is valued for its medicinal properties. It is said to be good for the skin, and often used for massages as it penetrates deep into the skin to provide nourishment and helps relieve stress. It is considered to be good for the hair as well, and also used as a carrier oil for different cosmetics.

While it requires a little ‘getting used to’, sesame oil is unique in its characteristics and once you start cooking with it, you will learn that it can be used in many interesting ways to spruce up your everyday dishes. Besides adding an extra dose of flavour, it will also give a healthy spin to your food. How?

Here’s what makes it good for you –

Don’t go by the size because sesame seeds are a powerhouse of vitamins and minerals. They are loaded with copper, zinc, magnesium, iron and calcium. While sesame oil may not contain as much nutrients as the seeds because some amounts of it are lost during the extraction process, they still retain most beneficial properties. It is particularly known for its zinc and copper contents, which help in the production of red blood cells, blood circulation and metabolism. Copper is also known for its anti-inflammatory properties, and helps reduce arthritis pain, swelling of joints and strengthens the bones.

3. Antioxidants to the Rescue

Sesame oil contains a chemical compound known as lignans, which are commonly found in plants. Lignans are known for their unique chemical and physiological properties, and especially credited with being a powerful antioxidant. Sesame oil also contains Vitamin E, another powerful antioxidant. Because of these reasons it doesn’t turn rancid easily and is commonly used in beauty treatments.

It is not without reason that in the ancient times sesame oil was used commonly in cooking. According to a study by an Indian researcher from Annamalai University and published in Yale Journal of Biology and Medicine, “Sesame oil as edible oil lowers blood pressure, decreases lipid peroxidation, and increases antioxidant status in hypertensive patients.”

5. Great for the Skin

Sesame oil is valued in Ayurveda because of its antibacterial and anti-inflammatory properties. It is commonly used in beauty treatments for the skin because it is an excellent moisturiser, promotes regeneration of healthy skin, has anti-aging properties, and is considered to be a natural SPF. It is also used extensively as a massaging oil because of its warming property and its ability to seep deep into the skin.

Sesame oil contains an amino acid known as tyrosine, which is directly connected to serotonin activity. Serotonin is a neurotransmitter which impacts our mood. An imbalance of it could lead to depression and stress. According to experts, consuming foods that help in the production of serotonin helps in feeling positive, keeping chronic stress at bay. Sesame oil is a good example of that.

Oil pulling is an ancient Ayurvedic technique which is followed for promoting oral health and removing plaque. A tablespoon of oil is taken on an empty stomach and swished around in the mouth for 20 minutes and then spat out. It is believed to remove toxins from the body. Sesame oil is commonly used for this practice because of its medicinal properties.

How to Use Sesame Oil

CommentsSesame oil can be used to directly replace other cooking oils. If you are new to it, try using smaller portions to get accustomed to its taste. Gradually, you can start experimenting with different flavours and learn how it teams with other ingredients. It is commonly used in Asian cuisine, particularly for stir-fries. A quick tip is to add a teaspoon of the oil in a heated wok, tip in chopped vegetables of your choice, add seasonings and herbs and stir-fry on high heat for a few minutes before serving. You can also add it to your salads and marinades. It is quite versatile.