9 Mouthwatering Rajasthani Desserts We Bet You Would Love to Devour!

Rajasthani cuisine boasts of its royal tradition and culture. The locals like their delicacies to be spicy and full of masala, and the desserts sweet and sinful - there's nothing in between. 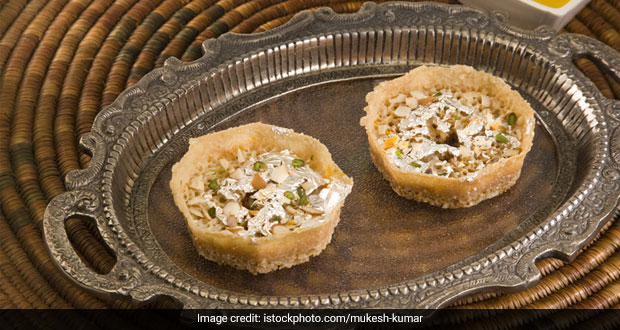 These Rajasthani desserts are surely going to relieve you from sweet cravings.

Rajasthani cuisine boasts of its royal tradition and culture. The locals like their delicacies to be spicy and full of masala, and the desserts sweet and sinful - there's nothing in between. After having a heavy and spicy meal, they generally seek something extremely sweet to satiate their palates. Desi ghee is a pre-requisite to most of the Rajasthani desserts and adds that extra flavour to them. These desserts are surely going to relieve you from sweet cravings and we bet you won't be able to read through without getting tempted to have some. We list down nine interesting Rajasthani desserts for you to devour -

Doodhiya Kheench is a wheat porridge that is popularly savoured in Rajasthan and believed to have originated in Udaipur. It is similar to rabdi and tastes best when made on a sigdi (angithi) in a degchi (copper utensil). It is generally made during the winter season and a must on Akshaya Tritiya. Doodhiya Kheench is different from Meetha Dalia that we usually eat for breakfast. It is made from hulled wheat, wherein the husk is removed from the wheat grains. This dessert needs wheat, full cream milk, cardamom powder, saffron, sugar and nuts like almonds or cashew.

This soft, chewy yet delectable dessert is also known as Besan ki Chakki or Mohanthal. It is usually made during occasions like weddings and festivities. A complicated mithai to perfect, Dilkushar is traditionally made with coarsely ground gram flour (besan). Apart from besan, it is made with mawa (khoya), cardamom powder, sugar, milk, almonds and dollops of ghee. This mithai is bound to make you fall in love.

This soft and chewy dessert is also known as MohanthalPhoto Credit: Cuisine Gallery Of Daisy's Notebook

Ghevar makes for a traditional sweet dish in Rajasthan and is savoured during festivities. Ghevar is a disc-shaped dessert and has toppings that include rabdi, malai, mawa and many more delights. It is made with refined flour, desi ghee, milk, saffron, cardamom powder and sugar. Rabdi is basically thickened sweetened milk that is spread on the top layer of the ghevar and it tastes heavenly.

Ghevar makes for a traditional sweet dish in Rajasthan.

Balushahi is a popularly savoured dessert in North India, including Rajasthan. This sweet dish is made with maida, sugar, sodium bicarbonate, yogurt and milk. This flaky sweet is deep fried on low heat and then dipped in a bowl full of sugar syrup. Balushahi is generally served during festivities and makes for a super heavy dessert and is high in calories. But having just one might not hurt anyone. Go ahead and grab your bite!

Balushahi is a popularly savoured dessert in North India, including Rajasthan​.

Churma Laddoo is not only popular in Rajasthan, but it is savoured in Gujarat too. It can be made with atta or besan and is generally prepared during Vrats (fasts) like Karwachauth. It can also be gorged on with Dal Baati. It is made with whole wheat flour, semolina (sooji), ghee, jaggery, milk, poppy seeds and cardamom powder.

Churma Laddoo is not only popular in Rajasthan, but it is savoured in Gujarat too​.

Mawa Kachori is a sweet kachori, which is a pastry filled with aromatic mixture of mawa (khoya) and loads of nuts, making it a festive dish. What's the best part? The kachori is whole-heartedly dipped in sugar syrup and then served. The kachoriis made with maida, ghee, khoya, cardamom powder and lots of nuts to fill in. Mouthwatering much?

Chhena Malpua is a delicate and lacy dessert made fresh with paneer and can effortlessly melt in your mouth. This dessert is best enjoyed with a dollop of rabdi on top or garnished with almonds and pistachios. These malpuas are made with paneer, sugar, nutmeg powder, cornflour, saffron, ghee, almond and pistachio.

Chhena Malpua is a delicate and lacy dessert made fresh with paneer.

Moong Dal Halwa is a classic dessert in Rajasthan and is generally prepared during winters. It requires a good amount of time and energy for preparation. It is made with moong dal, milk, sugar, ghee, cardamom powder and saffron. You can also replace sugar with jaggery and hence make it more authentic and tasty.

Moong Dal Halwa is a classic dessert in Rajasthan.

We are sure, you are tempted to have most of these desserts. So what's all the waiting for? Go ahead and make some for yourself and do let us know how you liked them.