Baklava Recipe: How to Layer Up This Turkish Classic 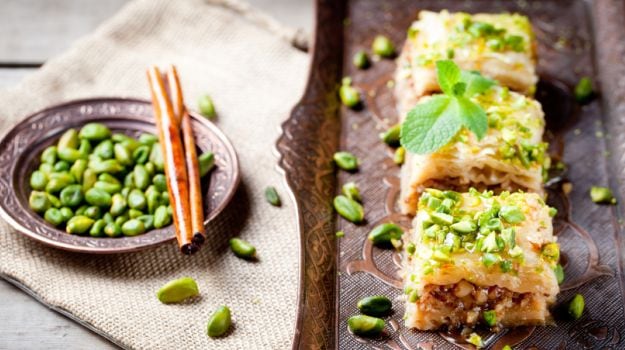 It was early one morning in Istanbul when I learned to love the baklava. Having always sampled rubbery, tasteless or overly sugary concoctions across the world, I was a lapsed lover of the sweet, finding it difficult to pay good money and have my sweet tooth disappointed yet again. But here I was in Turkey, home of the baklava. The delightful Gaziantep baklava was placed by none other than The European Union on its list of protected designations of origin and geographical indications. It's the first Turkish product and the 16th non European Union food item to make it to the list. So that is quite an honour in itself.

I digress, back to Istanbul. Here I was, sampling pide and börek and doner and tea and coffee and lots of delicious little fish with bread (balik ekmek), but not one flaky morsel of sweet had touched my lips. Until my determined Turkish friend decided that enough was enough and took things into his own hands. He woke me at the unearthly hour of six thirty one morning and dragged me to a most tacky looking restaurant, a splash away from the Bosphorus. This was Karaköy Güllüoğlu, a name I did not even try to pronounce. Never a morning person, I grumbled about the hour, the travel, the decor, the crowd. That is, until my long-suffering friend placed three pieces of baklava on one of the high tables nearby. "Go on", he urged. "Taste it. I bet you won't be able to stop at just one". Of course I scoffed, but reader, you know better than I what happened next. I became a baklava believer. Güllüoğlu had made a convert of me.

Baklava can be a standalone item, and not necessarily the after meal sweet it is made out to be elsewhere. Which is why, every morning, a happy crowd would throng the faux-Ottoman styled Karaköy Güllüoğlu for its morning baklava, prepared and served fresh. This was not the most Instagrammable baklava I had ever seen but it was certainly the most delicious. The light, flaky layers of golden filo pastry (and there were so many layers) were studded with walnuts (or pistachios), and it was all dunked in a sweet syrup which oozed onto my fingers and into my heart. The baklava had no time to get soggy and my plate was empty in no time.

My friend told me that in his house, the usual end to a meal was a bowl heaped with fruit. Sweets and pastries, like baklava, were usually made on festive occasions or to serve to visitors only. His family recipe for the filo pastry was furiously guarded and not even his fiancee was allowed a whiff of it. That czarina of food, Claudia Roden, writes in her book, A Middle Eastern Feast, that "The sweet pastries, desserts, jams and preserves, which have given the region its reputation for a sweet tooth, are made to mark special occasions and for entertaining guests. They are symbols of generosity and friendship, happiness, rejoicing and success. Quantities are made regularly and stored away, ready for the casual caller and the unexpected friend". And so, it goes at my friend's house too.

It is now generally accepted as a fact that baklava was the work of some genius Ottoman chefs. Certainly, there was no mention of the dish at any time before the Turkish empire. Alan Davidson, in the Oxford Companion to Food, writes that "there is an established connection between the Topkapi Palace kitchens and baklava; on the 15th day of Ramadan each year, the Janissary troops stationed in Istanbul, used to march to the palace, where every regiment was presented with two trays of baklava. They would sling the trays in sheets of cloth from a pole and march back to their barracks carrying the baklava in what was known as the Baklava Procession. Before the First World War, it was customary for the great houses of Istanbul to keep two filo makers; one to make the filo for baklava and the other to make the stronger filo for borek".

How can one resist a pastry with such charming history? It is impossible, which is why I give to you, (my adaptation of) Hebeeb Salloum's recipe from The Arabian Nights Cookbook, one which I have used time and again, with great success.

1 tbsp Orange blossom water (I use honey and rose water)

Unsalted butter or ghee for the pan

2. For the nut mixture, combine the walnuts, sugar, 4 tbsp of butter, cinnamon and rose water in a mixing bowl. Liberally grease a baking pan with ghee or butter and keep aside.

3. Gently place one sheet of filo on the pan. Brush butter on top, then continue layering for six sheets of filo pastry.

4. Add a layer of nuts, spreading gently with your hand so that you have a fairly even, thin layer.

5. Add another layer of filo pastry by placing a sheet on top of the nuts and brush with melted butter. Repeat the entire step, layering four more sheets in all.

6. Add the next layer of nuts over the filo. Finally, lay a filo sheet on top of the nut layer and brush again with butter. Now add another six more filo sheets, sandwiched properly with butter (as above).

7. Chop the whole thing once assembled, into bite size pieces and bake for about three quarters of an hour. Make sure you have a very sharp knife to cut it, else it will crumble.

8. Once baked, pour the honey or rose water on top of the baklava. You may garnish with chopped nuts if you like. I like eating it right away but baklava stays for ten days, or even two weeks.


About the author: Meher Mirza is an independent writer and editor, with a focus on food and travel. Formerly with BBC Good Food India, she loves anime, animals and artsy things but also comics, technology and death metal.

CommentsDisclaimer:The opinions expressed within this article are the personal opinions of the author. NDTV is not responsible for the accuracy, completeness, suitability, or validity of any information on this article. All information is provided on an as-is basis. The information, facts or opinions appearing in the article do not reflect the views of NDTV and NDTV does not assume any responsibility or liability for the same.