Dabeli: The Gujarati Street Food That is Spicy Yet Sweet 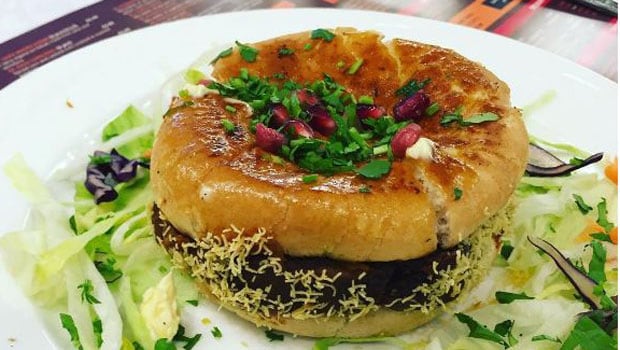 One of the many ways by which Gujarati food has lassoed my heart is through its veritable wonderland of street food. Although not as lauded as Mumbai or Delhi's street scene, Gujarat still offers many edible treasures to the interested. On a recent visit to Ahmedabad, Surat and the Kutch area of the state, I drove by busy streets that were swilling with people, all clustered around food carts with elegantly-displayed wares.

Big streets and narrow lanes were all paved with vendors selling a flurry of food - pao bhaji and sev puris, of course, but also fafda jalebis, the salty, savoury crunch of the fafda taming the sugary charms of thejalebi; crisp ganthias; cold, creamy kulfis. But most of all, there were dabeli stalls dotting the roads, the vendors setting up their stalls before the city starts its workaday thrum, and staying open until the wee hours of the night. My friend (who I was travelling with), who thus far had claimed to be impervious to the charms of Gujarati food, was fascinated with the profusion of dabeli stalls. "It is sort of like vada pao but different," I clumsily explained. In the end, I gave up all attempt at explanation, and steered her towards a dabeli vendor.

It wasn't the best dabeli I had eaten, but for my friend, it was an absolute revelation. "Why haven't I tried this before?" she marveled. In that moment, she became a fan for life.

Like so much Indian street food, dabeli has that genius blend of softness and crunch, sweetness and salt. Each vendor insinuates his own special flavours into the dish, but by and large, a dabeli is made of buttered pao, grilled on a tawa, split open and stuffed with a spiced potato mixture, onions, pomegranates and sweet- tangy- spicy chutneys. My friend's dabeli mixture was generously dunked in sweet date and tamarind chutney, tinged with a smidgen of garlic and sprinkled with sev ganthia for the element of crunch. But I have had spicier versions, versions with peanuts smothered in chilli that singed my lips, even versions with grapes. There is dabeli served with lashings of coriander, dabeli with the addition of delicate shavings of coconut, even dabeli with cheese, for those looking to further augment their waistlines. There are almost as many versions as there are vendors!

(Also Read: 10 Local Dishes in Mumbai You Need to Bite Into)

Where to Eat Dabeli

Thankfully, for those of us unlucky enough not to be living in Gujarat, dabeli is available across the country. In Pune, I have tasted Cheesy Kucchi Dabeli at Manisha Bhel Pani Puri Snacks Centre, and an unfortunate mayonnaise-flecked one at the uniquely named WatsApp Dabeli Centre (in Pimpri), which also offers schezwan and cheese options, and the immensely popular Butter Kadak Punch.

Mumbai has my favourite dabeli outside of Gujarat of course, by way of the popular Swati Snacks -- I think the restaurant has the ideal ratio of sweet to spicy flavours. But of course, there are plenty of other places to partake of it. A friend swears by a tiny thelawala in Nalasopara called Famous Dabeli, another travels to Matunga dabeli that specializes in dabeli and vada pao. The dabeli comes laced with garlic, slathered with cheese and butter, as a Jain version, or just plain, which is the least piquant of all the choices. Firki, in Lower Parel, has gussied up the dabeli by topping toast with the stuffing: it is named Dabeli Bruschetta and described as "Juicy dabeli masala served on top of toasted bread" on the menu.

In Delhi, I coughed up Rs 90 for a fairly decent one at INA's Maharashtra Food Stall, with a little cashew embedded within. And Amdavadi, in Chennai's T Nagar, offers it, too.

In Bengaluru, the dabeli is especially popular in Marathahalli's Eat Eroo, a small place famous more for its vada pao than anything else. I read about Delite Chaat House, a small eatery in Indiranagar, which serves not just the plebian regular, butter, cheese varieties of dabeli, but also a jammy version, a dry fruit -infused one, and the intriguingly named Delite Special. The regular version is not very spicy, and is very close to the dish she used to enjoy in her home town of Bhuj, but she has also tried the extra buttered bread which she found pretty decadent.

How to Make Dabeli

I am no expert, but I do sometimes make dabeli at home with leftover bhel chutneys. The rest is mostly assembly, tweaked to my taste.

1. For the dabeli masala, first roast themasala lightly, then mix thoroughly and set aside.

2. Next, heat a little oil in a saucepan, and add in the potato mixture, with the pinch of hing, jeera, and salt for seasoning. Stir and if need be, add a little water, to soften the mixture. (At this stage, you may choose to add in some desiccated coconut.) Add in the dabeli masala, then take off the heat and form into six patties.

3. Toast the paos on a tawa, then butter them thickly. Slather with as much chutney as you like, and stuff with the potato patties. Sprinkle over the chopped coriander leaves, sev, onion, peanuts, and pomegranate. Enjoy!