How to Make a Hotpot Meal: 5 Essential Tips for All-in-One Cooking

Hotpots might be immensely popular in Japan but they have been associated with Chinese cuisine for centuries and are popular across South East Asia. 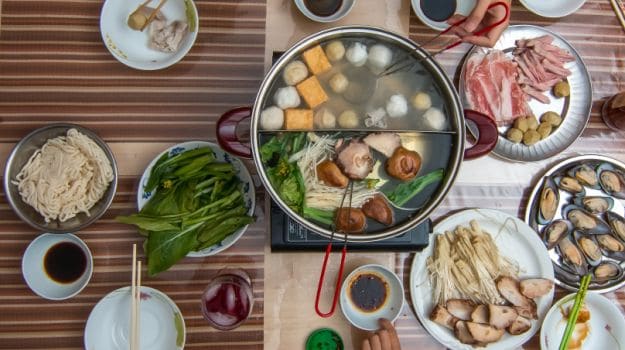 Highlights
It’s a cold yet clear day in December and I’ve just witnessed one of the most spectacular sights anywhere in the world. I’m at Lake Kawaguchiko, one of the vantage points to capture a picture postcard view of Japan’s iconic Mount Fuji. I’m still under the spell of ‘Fujisan’ as we arrive at a popular local restaurant – Kosaku Hoto Kosaku. Diners come from all over Japan to sample Hoto, a delicacy in this prefecture (Yamanashi). Local legends suggest that a regional warlord and his samurai always stopped for Hoto before heading into battle. I kicked off my shoes before entering the restaurant with traditional Japanese ‘low’ seating.

Thick wheat noodles (that resemble extra thick Udon noodles) cooked with pumpkin and other seasonal vegetables cooked in a flavoursome miso soup broth and served in an iron pot. It’s just the kind of ‘meal by itself’ that hits the spot on a cold day. If the views of Mount Fuji were outstanding so was this hotpot meal. You often hear about Sushi and Bento box meals in Japan but this was probably one of the most satisfying meals I’ve had in Japan.Hoto is certainly not Japan’s best known hotpot dish (Nabemono is the local term for hot pot dishes). That distinction probably belongs to Sukiyaki (sliced beef with assorted vegetables and tofu in a soy sauce) and the more modern Shabu-Shabu (an onomatopoeia that takes its name from the swishing sound the ingredients make inside the hotpot). This dish is considered a rare delicacy largely because of the high-grade beef (wagyu is used too). The beef and vegetables are slow boiled in a seaweed broth and the soup is usually consumed at the end of the meal after the beef and vegetables.

The Origin of Hotpots

Hotpots might be immensely popular in Japan but they have been associated with Chinese cuisine for centuries and are popular across South East Asia. The Chinese hotpot can trace its origins to Mongolia almost 1000 years ago. Over the years it has spread across the country with regional variations especially in ingredients. It began originally as a meat dish (usually beef, mutton or even horse) and gradually some local versions also began to add seafood. It’s always been a communal meal associated with cold autumn and winter months. In many ways it is the Asian equivalent of the Fondue minus the cheese. The cooking equipment might have changed from a more traditional coal-heated steamboat to a modern induction stove but the basics haven’t changed.

Asian hotpots are a great idea for a leisurely dinner on a cold winter’s night with friends or family. Here’s what you need to get started:

1. The Broth: The main element in the mix is the broth that is usually flavoured. You can choose to keep it simple with just a vegetable or meat broth (stock) or add flavours. Your neighbourhood gourmet store might have a choice of special soup bases for a hot pot (like a regular Sichuan hot and spicy base). You could also experiment with your own Oriental soups or popular instant soup versions for the broth. You need to make sure the broths stay dilute and don't thicken (that can happen with excess corn flour).

2. The Meats and Vegetables: you can add anything from chicken to lamb to beef to your favourite seafood in the broth. You could precook the meats in case you like your meats extra soft and tender but this may not be required for prawns. You could also marinate your meat in your favourite sauce before adding it to the broth. Fresh, crunchy vegetables are the key. Exotic mushrooms, baby corn, thinly sliced carrots, tofu and also crunchy lettuce are all perfect.

3. Staples: Noodles work best. You can play around with different types of noodles – buckwheat or udon noodles. Thicker noodles work better. You could also add rice instead of noodles.

4. Dipping Sauces: The broth is usually cooked in the centre of the table and people around the table add vegetables or meat of their choice. As you keep dipping into the hotpot, its customary to pair the vegetables and meats with a dipping sauce. Again it boils down to personal preferences from just simple soya sauce with some seasoning or spicy sauces or sweeter sauces. It’s common to see just beaten egg yolk used as dipping sauce.

5. The Equipment: This is often the most trickiest part. The key is to enjoy the hotpot meal on your dining table along with friends and family. Electric Induction stoves (available on online portals for as low as Rs 2000/-) are the best solution. Of course, you will also need a large hotpot and lots of creative ideas about what to toss into the hotpot!