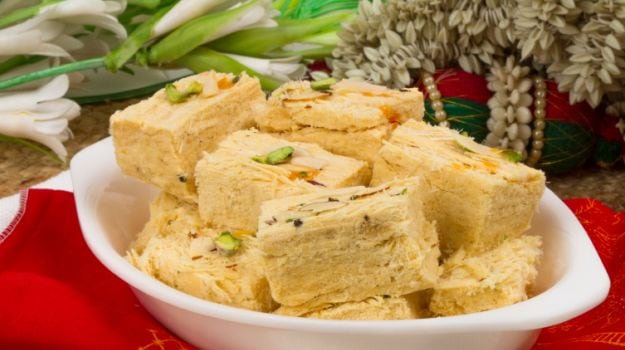 Before you bite into soan papdi, remember it is not just related to Patisa and Mysore Pak but to a whole genre of flaky flour based confections that have come to us from interactions with other cultures.

I first saw it made in a modest halwai "factory" in a small village near Hissar in Haryana. It was monsoon--- the time of the year, when apparently soan papdi sells most briskly in the Hindi heartland- the time around Rakshabandhan. Though, of course, packaged and branded mithaiand the longetivity of this flour and fat based sweet now means that we consume it all year round, regardless of occasions.

The karigars, who were cooling the mix of besan and flour in huge vats, pouring sugar syrup over this and then somehow, magically, making flaky strands appear out of all this goo-yiness, would pack the mithai and send it in trucks to the closest cities.

What they, or those who would eventually bite into it, may hardly know is that the soan papdi has cousins all over the world. Most notably, the Pismaniye, a Turkish "candy floss".

When one thinks of candy floss, one just thinks of the simple (and pink) sugar cloud that dissolves as soon as it touches your lips. But pulled sugar is a rather simplistic taste. Pismaniye, the Turkish equivalent (which is made differently too from candy floss) builds far more complexity into the entire process of eating strands. Roasted flour and butter are blended into sugar and the sweet garnished with pistachios.

The roasting of the flour and the pistachios both contribute a sense of nuttiness to the confection. This is even more apparent in the soan papdi, where the flavour of the gram flour as well as charmagaz (melon) seeds that are used as a garnish instead of pistachios, contribute to the nutty flavour profile.

The flaky soan papdi however, is just a cousin of the Patisa, a seemingly far more ancient mithai. Besan as an ingredient is fairly unique to Indian cooking. Even though chickpeas are predominant in Arabic cooking, the flour and its innovative uses are pretty intrinsic to Indian cooking-and spread across the Subcontinent.

It is inevitable therefore that we have a whole genre of besan-based sweets. My parents still distinguish mithai in generic terms-according to the basic ingredient used. For them, therefore, only about three broad categories of mithais exist in India: Milk based, vegetable/fruit based (like the various halwas), and wheat flour or gram flour (besan) based.

The patisa, which is much denser, is really just a barfi or fudge made with bhuna besan, ghee and sugar. When and how did the innovation of the soan papdi occur? When did someone decide that beating the mix with a fork and running strands through it, would make this a much more delightful confection? These are interesting food stories that need to be unearthed.

If the Soan Papdi has a Turkish connection, it also has other Subcontinental ones: Namely in the Mysore Pak, another spin off of the besan barfi -- more moist than the barfi/patisa. The flour is roasted more here and the resultant confection has a far richer colour than the Soan Papdi, which is off-white/pale compared to the robust southern cousin.

The pale colour of the Soan Papdi, as well as its lightness of touch comes not just from the aeration of the mix but also because unlike the purely besan-based sweets, this one is made with a mix of besan and maida. This takes it much closer to European and Turkish flour based sweets. The Pismaniye, for instance, is made from maida.

It also takes it close to the Feni, the Rajasthani sweet, also popular during the monsoon festivities (Rakshabandhan, Teej as also Id), which is a similar confection of flour and sugar pulled into light strands. The gluten in the wheat allows for the strands to stretch without breaking. The Feni obviously owes something of its origins to the idea of the vermicelli/seviyan. And sometimes, depending on where it is being made, rice flour substitutes the wheat (just as seasame flour substitutes the refined wheat in some Iranian confections of the same genre).

It is interesting that Feni (as also seviyan) cuts across religious barriers in India. They are prized as festive sweets; as Ramzan food, you can see whirls selling in the night markets. And devoted wives fasting for their husbands' longetivity during the patriarchy-imposed Karvachauth eat it as their before-day break sargi sustenance.

The soan papdi may or may not have such ritualistic significance. But what it shows up for sure, is the idea of food without boundaries. The lightness of touch that makes it so prized is a result of our shared cultural heritage, the result of interactions, political, trade and cultural with other empires of the world, mixing with the indigenous ways of treating ingredients.