The Fascinating Story of Halwa and Its Different Types - Badam, Gajar, Dal & Lauki 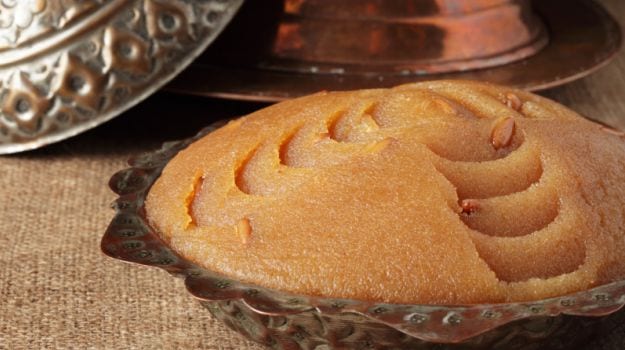 Even before I first tasted it, I was fascinated by the Turkish Delight. That was in part due to my fascination with Lord Peter Wimsey, Dorothy Sayer's partying, suave, upper-class gentleman detective, who plays cricket, plays the piano and has an abiding interest in food and drink. In one of the murder mysteries he solves-to try and clear the name of a woman he loves-Wimsey makes us acquainted with Turkish Delight. It features pretty prominently in the case. And I am sure, even those sections of English society who did not find Wimsey himself exotic, would have been unutterably seduced by the sweetmeat.

When I did taste the Turkish Delight, it reminded me of other things: Of both the Karachi/Bombay halwa that we sporadically came across in northern India, and of the Kozhikodan halwa, flavoured, if not with rose water and orange, then with banana and coconut, but essentially with the same texture and idea. And that really is the whole fascinating bit about the halwa, the Arabic sweet.

Halwa's tentacles extend both East and West from the epicentre of its origin, spurring the creation of dessert traditions that should smack you in the face with their similarities-only if you weren't so busy eating them up! Considering I am a staunchly (perhaps strangely) "non-dessert-person", it is only fitting that the stories fascinate me more than the halwa itself.

A confection made of flour (of various kinds), sugar, water, nuts and with or without oil/fat, the halwa has decidedly Arab origins, from where it seems to have travelled both East and West, through trade and conquest.

The Turkish Delight, that traces its 250-year-old history, with the story of its creation (disputed) by Bekir Efendi for the sultan who wanted to please his women, is, of course, a kind of halwa. Made from cornstarch, flavoured and coloured exquisitely, it may have been meant as a little bite to soothe the throat, but its similarities to confections such as the Karachi halwa as well as the Italian and Spanish turron/torrone can hardly be overlooked.

The turron uses egg white to bind the nuts and the sweet, and is baked, although it is not necessary for its texture to be always hard and brittle. In Italy, there are soft and supple versions available, particularly in Cremona, where it "originated". In fact, the Latin turron is not only exactly the same as the nougat that you may come across in France and Belgium, but can be seen to be similar to a confection called Hulwa, made with egg whites and sugar/honey, whose recipe is recorded in a 15th century Islamic cookbook by Ibn al-Mabrad.

It is a distinct possibility then that the Arabic/Moorish influence on southern Europe changed the halwa tradition to the turron one!

In India, the journey is more straightforward. At least for coastal towns such as Karachi and Kozikhode, both of which produce a gelatanious (made with refined flour/cornflour) version of the halwa, named after themselves. Both the ports were amongst the earliest to have Arab influence, through trade, and their food histories are therefore quite inextricable from many of those traditions. Kozikhode, in fact, had the famous SM Street-"sweetmeat" street, as it was named by the Colonial masters, after its halwa shops; the halwa itself referred to as "meat" because of its texture.

The kind of Arab-influenced halwa is quite distinct in texture, however, to the traditions which came in later, influenced by the sophistication of the Persians/Mughals, when innovations happened with the availability of a wider variety of ingredients.

In the north of India, as also Maharashtra, Tamil Nadu and Karnataka, the most common type of halwa is essentially the sooji/rava (semolina) confection, made with the addition of water, fat, sugar and add-ons such as cardamom/saffron/nuts to make it richer and aromatic. This is quite similar to the Greek tradition of the halwa, which is called the 1:2:3:4 there, because of the proportion of the ingredients to be added to the porridge-like confection (fat, semolina, sugar and water).

But Mughal/Persian influenced halwas in the Subcontinent are even richer and more innovative. From those made with various dals (moong and chana lentils) to those made with vegetables (carrots, bottlegourd) to even more exotic ones made with just nuts (Badam ka Halwa with almond paste), these are rich, full-of-ghee fudges cooked to perfection in milk.

Badam ka Halwa, of course, is the quintessential rich man's/ruler's dessert. The expensive ingredient is cooked, almost simply (which makes sense if you are using a premium ingredient) and not really tampered with too much, even in terms of adding essence, perfumery et al. Fittingly, thin silver varq (or gold) was all it needed to be a "niyamat" (elusive delicacy).

The dal-based halwas, similarly, play upon their single, dominant ingredient and the whole recipe depends upon the fact of cooking the lentil paste well enough in ghee until aromatic. Simple dexterity; no complicated ingredients. Because of the copious amounts of ghee and heavier grain, these halwas are obviously winter delicacies.

Vegetable-based halwas, similarly, are a Subcontinent invention- developed most probably at the zenith of the Mughal culture and cooking. From lauki and kashi halwa (made with bottle gourd and ash gourd), cooked in milk and then set on thalis to halwa made from even bitter veggies such as bitter gourd (defeats the purpose of the veggie, in my opinion), these were clearly innovations meant for upper class banquets till their popularity made these quasi home dishes.

But nothing can match the popularity of Gajar ka Halwa. The transition of the carrot halwa from an uncommon, exotic dish to a regular winter dish for the masses is a fascinating story. Orange carrots, apparently, did not come about till the 17th century, when, as the story goes, Dutch horticulturalists developed the strain to honour William of Orange.

Before that carrots, indigenous to Afghanistan, were purple in colour, also red and yellow. The orange carrot apparently (and quite naturally) became a trendy, pretty food, and sweeter too. As it began trending in Europe, it was inevitable that some of it also found its way to Mughal India through trade with the Dutch. It began to be grown in Punjab as a winter harvest, and as cooks experimented, the popularity of Gajar ka Halwa was hard to match.

It inspires much passion and nostalgia till today. At Gaggan's Bangkok, one of the most interesting desserts is a pretty flower, which reveals itself as a granny's Gajar ka Halwa when you bite into the petals.