Yasmin Karachiwala has sculpted the fabulous physiques of several Bollywood beauties including Alia Bhatt, Katrina Kaif and Bipasha Basu. Here's what the trainer eats herself! 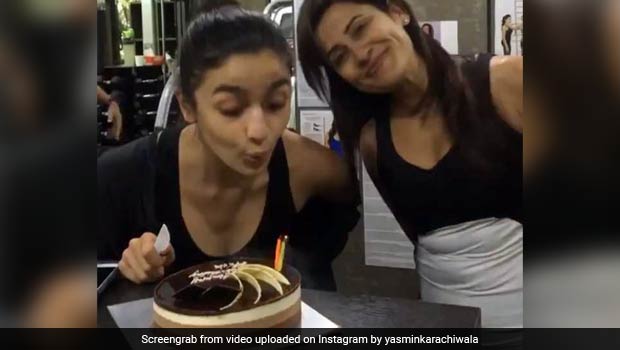 Highlights
Do you ever wonder how our beloved Bollywood stars are able to maintain such fit bodies, despite their hectic schedules? How are they able to glow the way only they know how to, despite working long irregular hours and also, partying their shoes off? Well, as they say, behind every fit actor, there's a team of very wise and hard working physical trainers and nutrition experts. The team works day and night to figure out workouts and meals perfectly suited to each individual actor/celebrity's body type and needs.

Pretty much everyone is familiar with celebrity fitness trainer Yasmin Karachiwala, who has been credited with the fabulous physiques of several of Bollywood's leading ladies. Karachiwala is trainer to Alia Bhatt, Huma Qureshi, Bipasha Basu, Kriti Sanon, Deepika Padukone and Katrina Kaif. The lady is very active on Instagram and her timeline is full of workout videos that fill her followers with enough fitspiration to last them a lifetime!

However, we were curious about what Yasmin eats to keep so fit and give her body so much energy as to power through all her workouts. Some Insta-stalking revealed to us the secrets of her superb energy levels- a clean diet largely consisting of low-calorie foods and drinks. Let's take a look!

For her meals, Yasmin prefers lean proteins from salmon, along with some veggies. The vitamin C rich broccoli seems to have found favor with the trainer, due to its numerous health benefits and low calorie profile.

Yasmin also believes in including a lot of seasonal fruits and vegetables in her meals. Sample this beautiful bento box consisting of seared swordfish with mango and pineapple salsa, mixed beans salad, tomato mozzarella, marinated olives and sweet potato tagine with tabbouleh salad. There are numerous benefits of eating seasonal foods, including protection from seasonal flu and infections. She likes including a lot of good fat, proteins and complex carbs in her food.

Yasmin also savours a lot of vegetable in the form of smoothies. Avocado seems to be one of her favorite ingredients for a healthy green smoothie. This breakfast smoothie contains kale, avocado, banana, spinach, Greek yogurt, orange, chia seeds and is topped with unsweetened coconut flakes. Yasmin calls it the Pure Hulk Smoothie.

Yasmin shared this weight loss drink recipe with her followers and we simply loved it. It's called the Hot Apple and contains apple cider vinegar, which is widely known for its weight loss properties, honey, cinnamon, cayenne powder and lemon juice in water. About the drink, Yasmin says, "Keep sipping on it all day and please do not think this one change will get you to your goals. It's always a synergy between you eating well, getting in couple of consistent workouts a week and these little tricks that do wonders for your gut which eventually lead to you reaching your goals."

Yasmin loves to indulge too and occasionally shares snapshots of her date with desserts with her followers. This one looks like such a yummy, happy mess and we're pretty sure Yasmin deserves to partake in this gratifying dessert.

Karachiwala had revealed in an interview that she doesn't believe in going on diets to lose weight. "I don't like the word diet. I think we all are smart and making smart food choices is a lifestyle change. I only educate my clients on which food is good and we all know that fried, sweet and alcohol is bad so we should avoid them", Karachiwala had said in an interview. Now that's a fitness mantra we should all live by!