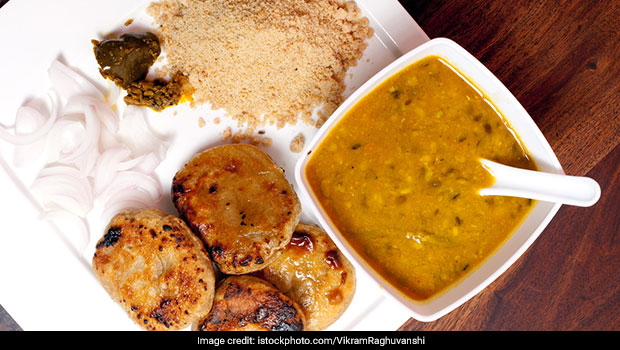 Rajasthani Recipes: The land of deserts is also the land of eclectic, mouth-watering delicacies

The desert-land of India, Rajasthan is also a land of warriors and a place of majestic forts, expansive golden deserts with a history of rich cultural heritage. Known to be the land of Rajputs, there is a heavy influence from the kitchens of the royal Rajputs in the delicacies of the cuisine. Most Rajasthani delights are high on spice quotient and packed with masalas while the desserts are sweet and delectable.

While Rajasthan has a climate which doesn't allow cultivation of many crops or spices yet you would never feel the lack of it in their cuisine and its variety of dishes. While there is a magnificent range of Rajasthani vegetarian dishes out there such as dal baati churma, gatte ki sabzi or mirchi vada, Rajasthani cuisine is particularly known for its tempting, fiery lal maas. From Kota's kachoris and Jodhpur's mirchi vadas for breakfast to gatte with bajra roti in main course and Alwar's popular milk cake, Rajasthani food isn't going to disappoint you.

To much surprise, sweets in Rajasthan are not meant for an after-meal affair. Instead they are served along with the main meal. So you can often spot malpuas of Pushkar or Jodhpur's mawa kachoris served along with gatte ki sabzi.

Let us take you on an enchanting, gastronomical journey to explore the Rajasthani kitchens with 7 of our best Rajasthani recipes that you can try at home as well!

Here are the 7 Best Rajasthani Recipes that you can prepare at home:

A fiery combination of mutton, spices with a blast of chillies, laal maas is a delicious bright red-coloured dish with oodles of ghee and coriander leaves on top. It makes for a heavenly combination with piping hot parathas.

A heavenly combination often served with a sweet dish of choorma, dal baati is a must-try when in Rajasthan. Dough made with semolina and flour is stuffed with a delicious filling of peas, dhania, garam masala, chilli powder, salt and amchoor along with jeera and heeng, and baked to perfection. A great dinner idea!

Dal Baati is an ideal dinner option in winters.

A healthy and hearty bread made with pearl millet to serve with dry curries and sabzis for lunch and dinner. Since bajra is known to cool down the body and provide the body with essential health benefits, it is generally preferred in the regions with hot and dry climate.

These rotis are served with a huge helping of ghee.

Cooked gram flour dumplings dipped in a spicy gravy of curd and a host of spices. Gatte ki sabzi is a scrumptious dish that can be served for lunch and dinner along with naan, roti or even rice.

A fried pastry filled with a delectable mixture of mawa and nuts that makes it a great festive sweet to relish. Dipped in sugar syrup, mawa (khoya) kachori is a popular dish in Jodhpur that is simply delicious.

(Also Read: 7 Creative Kachori Fillings You Must Try this Monsoon)

A delectable dessert for every occasion.

Mirchi vada is a mouth-watering snack from Jodhpur, which finds its place on the breakfast menu of most eateries in Rajasthan. The masala aloo filling stuffed in pepper and deep-fried to perfection, Rajasthani mirchi vada tastes best when served with tangy tomato chutney.

This is a popular street snack of Rajasthan also known as Jodhpuri Mirchi Vada.

Ghevar is a traditional Rajasthani sweet relished especially during the festivities of Teej. It is a disc-shaped dessert that comes with many delectable toppings like malai, rabdi, mawa etc. Made with refined flour, milk, saffron, cardamom and oodles of desi ghee, ghevar taste heavenly with a rabdi topping along with handful of dry fruits.

One can never have enough of this disc-shaped Rajasthani sweet.

While there is no dearth of Rajasthani delights out there, the ones mentioned above are sure to keep you hooked for long! Tell us the recipe you liked the most in the comments section below.

12 Cloud Kitchens In Delhi NCR You Must Try
Unlock: 10 Of The Best Home Delivery Options In Bengaluru