Arbi on Your Plate: Why You Should Include This Power Veggie in Your Diet 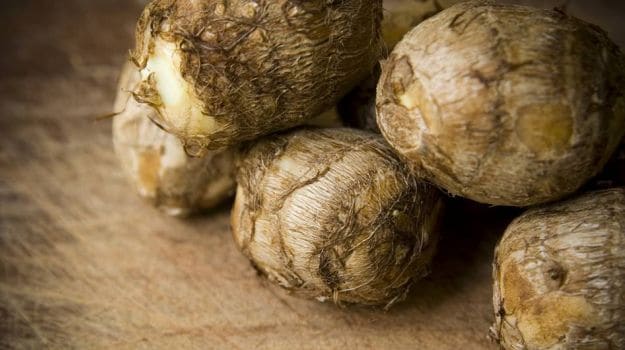 Despite its Hindi name, arvi or arbi, which may suggest to a layperson a connection, however faint, with the Arab world, colocasia is one of the oldest vegetables of the Indian Subcontinent.

Much before that nouveau upstart, the potato taking over the Subcontinent’s kitchens in such a comprehensive manner, colocasia was the preferred tuber. Both its leaves and root-tuber/corm were used in cooking not just in north India but all over the country. In the north-eastern regions, the leaves are chopped up and made into a curry amongst other things; in western India, the leaves are coated with gram flour and fried as a snack; and in the south, in Kerala, the tuber is fried or curried and eaten with rice.

(The Most Underrated Veggie: The Infamous Story of Bitter Gourd)

In fact, colocasia is not just indigenous to India but to large parts of eastern Asia as well. In the Philippines, it goes under a name similar to our arvi/arbi — abi, and is a popular veggie. Besides, of course, it’s most popularly used as taro everywhere.

The potato made its appearance in this part of the world only during colonial trade — the Dutch introduced the crop in the Philippines in the 16th century, from where, it gradually migrated to India only by the late 18th century. For years, after its introduction, it was regarded as a novelty, foreign veggie, used in food that was served at parties.

In its stead, colocasia was always the go-to vegetable in homes. The aloo-meat curry, one of the most basic ways of combining goat meat and potatoes in a spicy thin gravy in northern India may be deemed “home-style” today, but it was quite likely to have been preceded by arbi-meat curry as the original protein-starch combination.

Fried colocasia fingers make for an interesting textural counterpoint in this style of gravy dish, popular in UP, primarily in Muslim but also Kayastha homes.

Beyond the Obvious: Delicious Regional Monsoon Treats from Across the Country

The favoured way to cook the tuber is, of course, to fry it. Since colocasia is also a monsoon ingredient, this makes sense given the fact that the Indian kitchens, whose functioning was based in Ayurveda, preferred a switch to “heat-inducing” foods gradually as the monsoon cooled the Subcontinent and to fried foods to keep diseases at bay.

That is also perhaps why arbi and ajwain make for such a perfect marriage. Ajwain or carom is known for its digestive properties; it makes perfect sense and a perfect recipe to use the “monsoon” spice, warding off stomach infections common this time of the year, to coat fried colocasia.

Even the leaves are fashioned out into patode in UP and Bihar, and Gujarat use a sprinkling of carom in the masala spiking besan flour. Patode is a recipe for the rainy day: colocasia leaves need to be cleaned and washed, spread out and then coated with a thin batter of spiced besan. They can be layered, folded, and then rolled (like a Swiss roll), before being steamed. Cut into rounds and deep fry for a teatime snack. You may not find more exotic pakora anywhere.

The Powerhouse of Nutrients

We of course know that colocasia is an invaluable source of dietary fibre. The corms have more calories than potatoes, and these come primarily from complex carbs, which are slow digesting, will thus help fill you up more and also help elevate blood sugar levels gradually — unlike simple, easy-to-break down carbs.

The leaves on the other hand have antioxidants, betacarotenes and a significant amount of Vitamin A that is good for your eyesight amongst other things. And the corm has some essential minerals as well — zinc, magnesium, and potassium that help regulate heart rate and blood pressure. So what you thought was an empty tuber is actually quite a superfood in its own right.

The last one-two years have seen, and rightly so, a resurgence of tubers (other than potatoes) as chic ingredients in Indian kitchens. Even though, traditionally, tubers like arbi, kappa (tapioca), yams and kachalu have been staples, almost regarded as every man’s source for dietary fibre and nutrition, chefs experimenting with local ingredients and veggies have resulted in these tubers being highlighted in chic menus like never before.

Cassava chips, as you may have noticed, are quite the “it” things on trendy menus at bars and cafes. What began as a South American craze, seems to have permeated into our pop food culture ever where and these chips have been replacing those mighty potato wedges and thin chips on the strength of their ostensible nutritional superiority.

Sweet Potato: A Winter Superfood You Should Eat More Often

Like its cousin, colocasia is also trending as an ingredient, especially at “modern” Indian food establishments. Arbi Tuk, for instance, has suddenly made an appearance on many menus, including at The Bombay Canteen in Mumbai, pegged on local gastronomy and a reinvention of forgotten Indian regional recipes.

“Tuk” is a Sindhi term, essentially for deep frying vegetables and then tossing them in dry masala. For Arbi Tuk, all you need to do is boil the colocasia, flatten it and then deep fry till it is crisp and golden. Then, toss in a masala of dry coriander powder, red chilli powder and amchoor powder.
The recipe is essentially the same as followed in many parts of UP as well, where, one other essential spice is added to the crispy arbi — ajwain. It elevates the dish to another level.

Notch Up the Tang: Amchoor or Raw Mango Powder, the Summer Cooler

Promoted
Listen to the latest songs, only on JioSaavn.com
In Punjabi-influenced cooking, arbi may of course be cooked in a generic onion-tomato masala. But its charm can be better appreciated if you use the spices discerningly, and selectively. Dried fenugreek is another ingredient than goes well with the ingredient. Pan-roast the veggie and then coat it with a masala that includes a whiff of kasoori methi. You won’t forget the flavour.