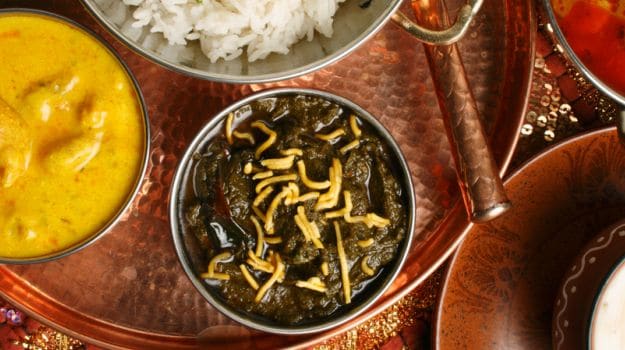 Highlights
Growing up in a Parsi home, the only exposure I had to colocasia as a child was by way of patrel, made from the leaves of the colocasia (arbi/taro/elephant ears) plant. At the time, the spicy whorls of besan, arbi ke patte and masala, didn't appeal to me much. Some versions had bananas and onions and those I liked even less; I am a person with a somewhat shy sweet tooth and the banana patrel version seemed like a hot mess to me. Luckily for me though, I grew up, my taste buds matured, and patrel is one of my favourite tea time snacks today (but I still prefer it without the banana).

Another advantage of growing up was that I could taste the cuisine of different parts of India. For instance, my Maharashtrian office mate would unfailingly share the contents of her dabba and once a week, those contents were deep-fried Aloo Wadi that vanished into hungry tummies in a twinkling of an eye. My Gujarati friend prepared steamed patra for her family, always keeping some aside for me. I have also tried Turia Patra, a Gujarati dish made from the quirky combination of colocasia leaves and ridge gourd.

During a visit to Assam last year, I tasted the most exquisite preparation of seafood and colocasia leaves yet - it was called (I think) Kosothuri Hukoti Maas, and has the most extraordinary smokey, fishy flavour. At a fancy hotel in Hyderabad, I tried Arbi-Mungphali ke Seekh, which was a skewer of peanut and colocasia, cooked in a tandoor until it was soft as butter. And once, my neighbours sent over Arbi Kebabs, a dish made of arbi laced with chilli and peppercorn, which they told was a speciality of Uttar Pradesh.

The Internet throws up a rainbow of colocasia recipes from all over India. In Kerala, chembila (colocasia) is chopped up with coconut, tamarind and shallots and turned into a curry. Konkanis go one step further, by using the leaf and the stem of the colocasia leaf (which is often tossed aside for being too fibrous) together with coconut, to make a tasty curry during the monsoons.

Colocasia curry with peanuts is a popular Maharashtrian dish and Nagaland and Bengal have their own colocasia preparations. The Bengalis mash the colocasia leaf and cook it with prawns or fish head to make Kochu Saager Ghonto. The leaves of the colocasia are dried and used to flavour the food of the Mizos. I've heard of colocasia leaf Usli, a Karnataka dish that laces the chopped leaves through a variety of dals. And that is just skimming the iceberg - I am sure there are plenty more preparations I am not quite aware of.

The best time to eat colocasia leaves is during the monsoon, although it is available freely throughout the year in Mumbai. The purple-veined leaves are velvety and mellow, yielding perfectly delicious curries, stews and stir-fries.

The colocasia leaf is fairly adaptable; it performs both as the star of the dish and a supporting role. Stir fry it with ginger-garlic, chillies and curry leaves for a quick meal. It also works marvellously well when it is cooked in coconut milk; carnivores can even add a handful of prawns or chopped pork to the dish. But my favourite way to consume colocasia leaves is by shrouding them in a shell of crisp, deep-fried dough - in short, as pakodas. Whichever way you choose though, the leaf must always be cooked, else it may lead to certain allergies.

There are many variations of this patrel in my recipe books. Bhicoo Manekshaw's version in Parsi Food and Customs incorporates banana, dhan sakh and Parsi sambhar masala. Bapsi Nariman, in Traditional Parsi Dishes, uses a smattering of cinnamon! The 1975 edition of the Time & Talents Club recipe book has a version made with chopped boiled prawns (trust the Parsis to work in something non-vegetarian) and another version of patrel, simmered in coconut milk. I must reserve my judgement for this last adaptation though - the idea of patrel in coconut milk is a tad discombobulating.

An Easy Recipe to Try at Home - Patrel

There are many variations of patrel in my recipe books. Bhicoo Manekshaw's version in Parsi Food and Customs incorporates banana, Dhan Sakh and Parsisambhar masala. Bapsi Nariman, in Traditional Parsi Dishes, uses a smattering of cinnamon. The 1975 edition of the Time & Talents Club recipe book has a version made with gur. It also offers a version made with chopped boiled prawns (trust the Parsis to work in something non-vegetarian) and another version of patrel, made in coconut milk. Here, the patrel ingredients are considerably scaled down, the roll is simmered in coconut milk, and then served in bowls with the coconut gravy. I must reserve my judgement for this last adaptation though - the idea of patrel in coconut milk is a tad discombobulating.

4-6 green chillies
4 cloves of garlic
1 tsp cumin seeds
1 tsp turmeric powder
1 tbsp mustard seeds
4 red chillies
Method:
1. Grind together all the ingredients into a paste for the masala and fry in a little oil, for about five minutes.

2. Mix all the ingredients (except the colocasia leaves) together until they become a thick, spreadable paste.

3. Next, wash the leaves thoroughly, dry them and remove the protruding main rib from each leaf. Place it face down on a large flat surface, such as a big chopping board, and spread a bit of the mixture on top of it. Make sure the strongest, largest leaves are kept for the outside and that the filling is not too thick.

4. Place another leaf on top of this, spread the mixture and repeat this process for four-five leaves. Fold in the sides away from you and then roll it into a cylinder, starting from the tip and ending at the base of the leaf. Once it is shaped into the perfect cylinder, tie it with a bit of twine to hold its shape. Repeat the process for all the remaining leaves.

5. Now you may steam the rolls for about half an hour and then shallow fry them until crisp. Or you can shallow-fry them in oil in a big frying pan for about 45 minutes. Cool and store in the refrigerator for up to a week. At the time of serving, slice the roll (it will resemble a roulade) and lightly crisp each slice on the tawa.