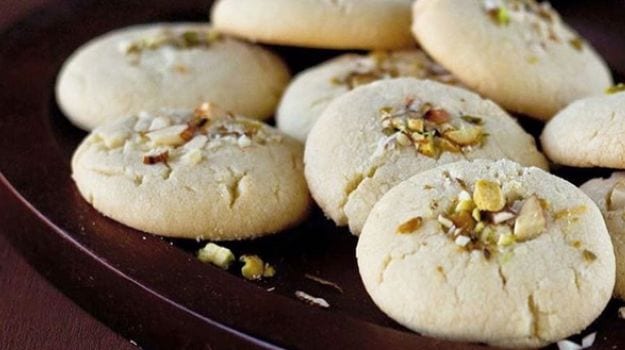 Everybody knows about the British and Portuguese influence on Indian food, but not a lot know about Dutch fingerprints on Indian food. Way back in the 17th century, plenty of Dutch colonies were flung all over the Gujarati city of Surat in order to facilitate trade with India. Anxious for a taste of home, they set up a bakery, employing five Parsis to run it. This happy monopoly soon came to an end though, when the British eventually wrested control of Surat. The bakery, largely untainted by the colonial forces at play, happily stayed open. One of the bakers, Faramjee Pestonji Dotivala, continued baking bread but demand for it sank. Perhaps it was too expensive? In any case, the older, harder bread which was sold for cheaper, became popular and eventually it morphed into the rusk-dry Irani biscuit. In its wake came the sweet, rich nankhataibiscuit, which the Dotivalas claim to have also invented. "In those days," the Dotivala website reads, "the locals used to make a sweet called 'dal'. Our ancestors baked the 'dal' and the now famous nankhatai was invented.”Elsewhere, in 'Eat, Live, Pray', a publication of the Federation of Zoroastrian Associations of North America, Farishta Murzban Dinshaw writes, “Parsi bakers were inspired by the eggless Scottish shortbread, favoured by sailors because it kept well on long voyages, to create nankhatai, one of Surat’s famous confections. The Surti bakers realised the recipe was suitable for Gujarati vegetarians who did not eat eggs, so they adapted it to local taste by adding cardamom, cashews, almonds and pistachios."

Today, the nankhatai we know is a light golden circle made with a cloud of ghee (or butter) and pocked with nutmeg and cardamom. Served warm and fresh from the oven, it has a dense, brittle, buttery texture that pairs excellently with a hot cup of tea. The nankhatai's marriage of starch and sugar is an immensely satisfying way to perk up a drowsy afternoon.

Where to Get Nankhatai

I've read of nankhatai street vendors who hawk their wares in narrow, old Delhi lanes. Someone once gave me a packet of crumbly almond-studded ones from Frontier Biscuits; apparently Frontier makes khatais in various flavours, including chocolate and mango. But I am a nankhatai purist, so I won't comment on the bastardisation of this biscuit. Some of the best nankhatais I have tasted though are from Mumbai's Paris Bakery, well-known for their heavy-handed use of butter. Consequently, their biscuits are absolutely delicious and their batasas are the best in the world, or so I always maintain. Recently, I tried the nankhatai in Udvada and we, as a family, were united in our disappointment. "Paris Bakery has spoiled us," said my dad, sadly.

To be fair, I have not yet tried the nankhatai from Surat's Dotivala or any from Pune's Parsi bakeries, a lacuna that I am desperate to fill. Perhaps it will be even better than Paris.

How to Make Nankhatai

The Parsis especially have taken the nankhatai to their heart and it is to my favourite Parsi cookbook writer that I turned for the recipe. This is of course, my well-thumbed copy of Bhicoo Manekshaw's Parsi Food and Customs in which she writes, "Parsis have no boundaries when it comes to good food and will accept any dish that their palates fancy. Their tea-time snacks are a delightful mixture of Gujarati, Maharashtrian and European dishes, as well their own typical ones." And so it is with the hybrid nankhatai. Here is her recipe, slightly astonishing because of her use of yoghurt.

Method:
1. Set oven to 175 degrees C (or 350 degrees F).
2. Sift flour with salt, crushed cardamom and bicarb of soda.
3. Beat ghee or butter with sugar till light and fluffy. Add curd and mix well. Add flour and mix to a stiff dough. Rest dough for half an hour.
4. Place one teaspoon mixture on a greased baking tray for each biscuit, leaving a space of 2 inches between each. Place a cashew nut on top of each biscuit.
5. Place in oven and bake for about 20-25 minutes.

The introduction of yoghurt into the recipe is intriguing. From my forays into Internet blogs and books, I noticed that the issue of yoghurt is split evenly down the middle. For instance, the other Parsi cookery writer that I respect, Bapsi Nariman, doesn't use any. Nariman, in her Traditional Parsi Dishes, uses semolina and whole wheat flour (not maida), doused in 110g of desi ghee, which she kneads. But Niloufer Icchaporia King, writing in My Bombay Kitchen: Traditional and Modern Parsi Home Cooking, does use yoghurt (and much, much less sugar than is required for Ms Manekshaw's nankhatai. Now that makes it healthier but does it necessarily make it tastier?).

My own taste test was conducted on (who else?) Ms Manekshaw's recipe, which I more or less followed to the letter. The nankhatai turned out delicious, perfect little half-spheres, crumbling and spluttering in the mouth. However, I did find the cardamom a little overwhelming, because I am not a massive fan of the spice.

A few other notes:

1. The flour will not turn brown after baking, but stay white or pale brown, which is how it should be.
2. The khatais may take less than 20 minutes to bake; mine were done in about 15.
3. After baking, make sure to let the biscuits stand on a wire rack or sheet to cool - they will harden into the perfect nankhatai texture.
4. Oh and don't skimp on the butter (or ghee). Its speciality is its decadence.