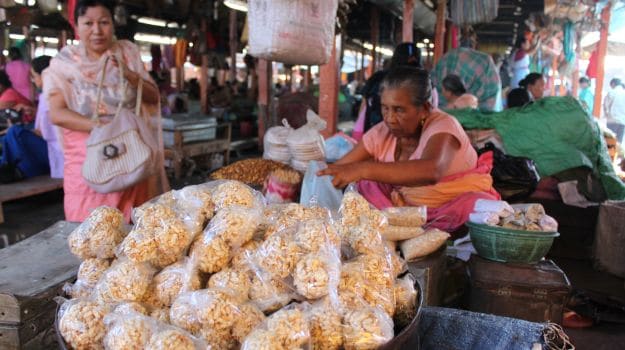 People in the Northeast of India have an appetite for anything that’s spicy and fiery. That is, when it comes to food. But when it comes to desserts or sweet dishes, they go slow and prefer to skip it altogether. This is because sweet dishes are never really an intrinsic part of their culinary idiom. Meals are seldom ended on a sweet note. They prefer to let the flavour of their food linger on long after they have eaten. They would rather wash down their meal with watery soup of assorted vegetables called champhut or antui, which is also a great digestive beverage. Or, perhaps with lal chaai that is strong with a hint of tej patta (bay leaf) or a squeeze of lemon, or even butter milk for the Sikkimese. So, people out there do not really have a sweet tooth.

However, this does not mean in any way they do not like sweets. Sweets are rather reserved for special occasions and hardly an everyday affair. The sweet savouries from the region are quite different from those found in other parts of the country. Interestingly, sweet savouries are keepers of tradition as they are prepared during festivals. In Assam for instance, most of the sweet savouries that one could think of are prepared during Bihu. In Nagaland, there are no known sweet dishes that people would hanker for especially after a fiery pork curry peppered with bamboo shoot. At the most, they would bit into gur. In Sikkim, my friends are quite hung up on their chhurpi, a fermented traditional cheese with a hard texture that oozes out its real flavour as you slowly bite into the hard lump. So, they do not have too many sweet dishes to offer.

Gur or jaggerySweet Treats from Assam

Guwahati-based Chef Atul Lakhar, who is known for his culinary art, says he is not fond of sweet as such, but does not mind the occasional indulgence during festivals. Assamese kitchens around Bihu, which is the biggest festival of the state, gear up with their local ingredients; they stock up items and go shopping as the preparation can last for about a week or so depending on the item and quantity of what is prepared.

Jaggery and coconut are locally available so they form an important part of the dishes. Rice is the main base for most of the sweet dishes. Hurum, for instance, is essentially puffed rice mixed with jaggery and curd. It can also be eaten with milk. Once the puffed rice is ready, it is a rather easily consumed as it can be mixed with curd, or milk. But preparing the puffed rice is quite a task which involves a tedious process. First and foremost, rice is soaked for three to four days and then drained and allowed to dry. It is then fried and pounded, et al. It is filling and perfect for breakfast or even when hunger pangs hits one in the afternoon.

Ladoosare a delight in many homes too. The ones made of finely grated coconut mixed with sugar and hot ghee are as popular as Til Ladoos, sesame balls made again with jaggery. Even students who live far away from home tuck a stock of ladoos into their suitcases that last for weeks. How discreetly, Nayana Das, my senior in college, would pull out a box from heaps of her clothes in the hostel cupboard and offer me those delicious ladoos prepared by her mother, which actually marked the beginning our friendship. Perhaps, it was the sweet ladoo that did the trick. Yes, people exchange sweets and thus cement ties with their neighbours, relatives and friends.

As for other type of sweets, Assamese people turn to rice as an important ingredient. One such rice is called kumol saul, an unique rice grown locally. Some even call it the magic rice as it becomes soft when soaked in hot water. It is said the generals of the Ahom king would carry this rice as it was the easiest to cook and savour whenever they were on the move. It is common to find a stock of this rice in most homes. It is usually relished with hot or luke warm milk and jaggery. In summer, yoghurt is perfect with this puffed rice.

However, the king of all sweets is the pitha. It resembles a pancake or crepe in some ways. It is prepared with a rice batter. The flimsy batter is carefully cooked over a low flame, roasted or even baked over a hot plate. The stuffing is what defines it. Sesame and grated coconut are integral when preparing pitha as they give that extra edge.

There is also what locals call the Hutuli Pitha. The name ‘hutuli’ is derived from a musical instrument which resembles a whistle. It is made of fine rice powder, and due to its bi-conical shape that resembles hutuli, it earns its name. Pithaguri is another variety which is made of rice flour, fried and served in hot milk. Some people try this pithaguri with jaggery, ripe banana and ripe jack fruit.

Of all the sweet dishes in Manipur, the one that stands out is what is loosely called the Sorat Tann or Tann Angangba, literally translated to ‘red bread’. It is served during funerals and the irony is, people love it. At least, I look forward to having it but not necessarily during funerals. These days, most homes engage special cooks to prepare this and relish it even during happy occasions. It is a thick paratha-like sweet made of flour that is mixed with jaggery and saunf, and then deep-fried in oil.

Black rice kheer is again, like any other kheer, cooked with milk and sugar and garnished with dry fruits. With rice, the people of Manipur experiment many items. Apart from kheer, with flattened or puffed rice, they make ladoos which is also called kabok. The flattened rice is mounded together in jaggery and stored in small packets and are available in every nook and corner shop. Sesame is another ingredient used for making ladoos. First it is roasted and then made into a rounded shape with jaggery.

The sight at Imma Bazaar, which is a market run only by women will have some corners with women manning heaps of home-made til and puffed rice ladoos. These are everyday eats.
Of late, my visit to Manipur was sweetened by the many new sweets that I got to sample in the market. People are getting innovative even as they try new items, such as the black cake which can pass off as chocolate muffins. They move faster than any other local sweets as they have a sweet scented aroma from the rice and taste just perfect.

The hill communities resort to their sticky rice cake that is sweated and savoured with tea. Called tanghou, this is made of pounded sticky rice powder mixed with sugar or salt, wrapped in plantain leaves and steamed. Leisurely, over tea and gossip, people relish this traditional sweet snack which to this day has no alternative. It used to be prepared only on special occasions. But today, as there are many enterprising women who prepare this in bulk and go from home to home, one no longer needs to wait for an occasion to sample it.

In fact, this sweetened sticky rice is common to the people of Mizoram, Tripura and Arunachal Pradesh. The Khasis and Jaintias of Meghalaya turn to pukhlein whenever they want something sweet. It is made of rice power mixed with jaggery, which is then rolled into a dough and deep friend in batches. It reminds me of the Bihari’s version of thekua which my Bihari friends got me hooked on to in school. But the difference is in the usage of rice and wheat, though the process remains by and large the same. Earlier people would prepare pukhlein at home whenever they wanted to have it with tea, but today it is available in the market so the stress of preparing at home is no longer there.

My Naga friends are full of tales of how folks in the village would take molasses made locally in villages. This is taken with red tea anytime in the evening after a meal. Also, what they have emulated from the Assamese is what the Aos called Amzu, which is a sweet dish made of rice which is first soaked in water, grounded and made into a paste and then rolled with til or sesame seeds. They say this was inspired by the Assamese pitha.

In Sikkin, during Dusherra or Diwali, the Nepalese kitchen is cramped with ingredients, using which many treats are prepared. Sel Roti is a rice-based savoury which is sweetened rice bread that looks like uneven doughnuts. It is made of powered rice made into a batter and added with different condiments including sugar, and then deep fried in oil. The process of frying is somewhat similar to preparing jalebis as it needs a swift hand to ensure the batter takes shape. When there are heaps of Sel Roti in their homes, know it’s to herald a festival.

Listen to the latest songs, only on JioSaavn.com
Lopchu is another Sikkimese sweet dish that I can think of as it reminds me of custard. It is made of milk and sugar. A thick consistency that needs no occasion or excuse, so people dig on this whenever they want something sweet!