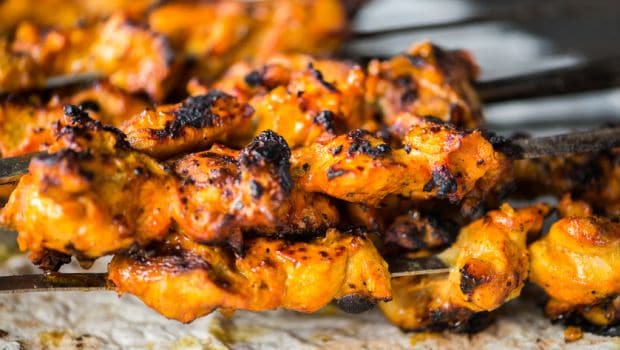 There a few things in life that are worth experiencing. Watching a skilled Indian chef do his magic on the tandoor is one of them...

Picture this: chicken marinated and then threaded onto massive four-foot long metal skewers, lowered down into a fiery tandoor oven and emerging 15 minutes later... Smoky, charred, juicy and tender. “Who doesn’t love tikkas?”, says Chef Sabyasachi Gorai. The word ‘tikka’ means pieces, bits or chunks, and is traditionally marinated in yogurt, aromatic spices and herbs and then grilled on skewers. Served simply with sliced onions and a squeeze of lemon or lime, it's simple, honest cooking. And the flavours? Mind blowing.

Chef Sabyasachi Gorai adds, “For me, the mostimportant part of making a tikka would be the cut and the marination. One needs to cut the meat or the vegetable in the correct places so that the masala could go in. I prefer to use dahi for marinating most of my tikkas, but sometimes I even use vinegar. It’s slightly different but the flavour is fantastic”. But more often than not, you end up with tikkas so dry, that even the sizzling platter it’s served on can’t save it.

Here are 10 delicious Indian tikka recipes to your rescue.

The creamy texture and the tenderness of the chicken, makes this one of the most popular Indian kebab recipes. Bake till crisp and golden, squeeze half a lime over it and serve hot.

This recipe is sure to draw recipe requests. Boneless chicken tikkas served with grilled mushrooms and spruced up with truffle cream. Yum!

Paneer tikka is a perfect starter for any dinner party - skewered, grilled till golden brown and the result? Downright divine.

Marinated in the beautiful flavours of laksa paste and yogurt, chicken pieces are grilled over charcoal fire.

Want to bask in the glory of your next party? Try this murgh tikka - flavoured with kasundi, spruced up with chaat masala and lemon juice, and garnished with fresh coriander.

These succulent chunks of sole fish, smeared with masalas and cooked to perfection in a traditional Indian tandoor will wow your taste buds no end.

Give the good old paneer tikka a new makeover for your next party. Here's an interesting recipe of paneer tikka stuffed with a mix of mushroom, aromatic herbs and spices and coated in besan.

Explore a range of flavors with this recipe that uses a lovely marinade of yogurt, besan, garam masala, cumin and tandoori masala.

CommentsWant to do something different? Try this delectable tandoori chicken tikka stuffed with pepper, onion, mint and served atop potato cakes with sun dried tomatoes and a hint of mint.